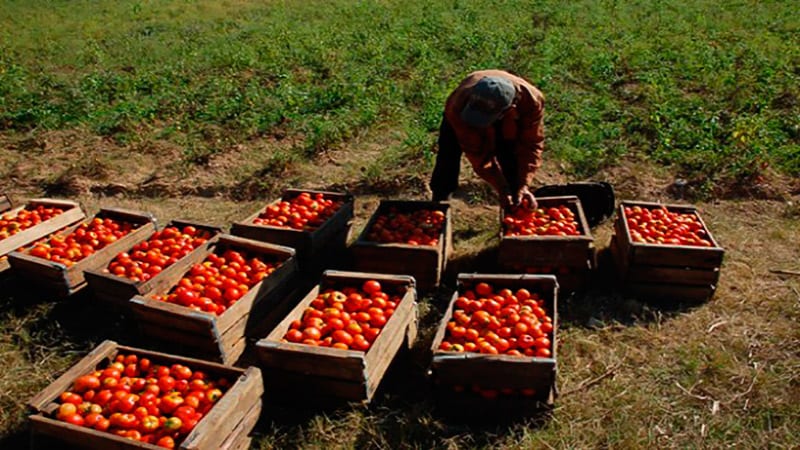 HAVANA TIMES — Tomatoes are rotting in the Caujeri Valley, a man tells me, which has had a good harvest this year, with a yield that doubles what was expected and has a modern factory to process them but, right now, its productive capacity isn’t enough to deal with all of the tomatoes that are coming in from the fields.

People have been watching tomato plants full of red fruits for two weeks now and are praying that it doesn’t rain and that mold overtakes them, rotting everything that touches the wet ground, but the skies aren’t listening.

Revealing their foresight, some people have picked the fruit and put them into boxes covered by banana leaves and put them out next to the highway. However, they aren’t sure they will escape the rotting that already lingers in the air in some places.

The man’s family, his mother, father and brother, estimate that if things continue on as they are, they will lose thousands of pounds of good tomatoes; which is ground at the Caujeri Vallery Canning Factory to make aseptic tomato paste which is then sent to other provinces, where they produce end products.

Before they all rot, farmers and people who hear these stories ask why the fruit isn’t being taken to other places, because if they can’t be ground to make paste, they can be used to make sweets, for direct consumption. However the bureaucrat’s decisions aren’t always the most fair or reasonable.

My interviewee confirms this: “With the amount of State trucks there are in the Valley, they should be given fuel so that they can transport the tomatoes to Guantanamo City if the factory can’t grind them, to the markets, the squares… and sell them even if it’s just for two pesos. Because the other alternative is a private truck hired to transport the tomatoes, but if stopped they will confiscate everything, and if the owner is really unlucky, even the truck will be confiscated.”

The logic behind such a great investment in the irrigation system, and then the obstacles for marketing the harvest is mindboggling.

The man then tells me that it’s the Agriculture Ministry’s fault, of the Agriculture officials, “the ones who aren’t pained to see whole harvests rot, who weren’t able to foresee a harvest like this one, and now that it’s happened, they aren’t looking for solutions.”

Finally, he asks me for the phone number of a colleague who had already dealt with this issue in a more far-reaching media outlet. I accompany him to the door, I watch him go down the stairs, get on his motorbike and go off in the cloud of grey smoke that comes out of its exhaust pipes…

On the corner in front, a street peddler is selling his merchandise. I ask him how much he is selling tomatoes for, out of curiosity. “10 pesos for the jar,” he tells me in a flash, “it’s a steal, isn’t it?”

3 thoughts on “Tomatoes are Rotting in Guantanamo”