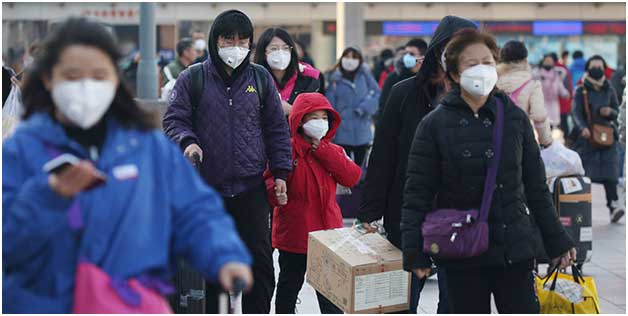 HAVANA TIMES – With over 37,500 staffers in its global Secretariat payroll, the United Nations has gone high alert as the deadly coronavirus continues to take a heavy toll worldwide.

The 39-storeyed Secretariat building is perhaps the only sprawling office space in New York city where thousands of staffers and diplomats from 193 countries either work or meet under one roof — along with hundreds of journalists and representatives of civil society organizations (CSOs).

Patricia Nemeth, President of the UN Staff Union (UNSU) in New York, told IPS that staff members have “expressed concerns” to the UNSU, “as to what measures are being taken by the administration to prevent the possibility of contracting the virus from colleagues who may have visited areas where prevalence of the virus is high.”

The Staff Union has requested the Department of Operational Support (DOS) to keep staff informed in a timely manner.

“The Staff Union has already been advised that colleagues in DOS are working on various scenarios and options for both the safety of staff and to mitigate any potential impact on the continuity of operations”, Nemeth added.

Currently, the total membership of the UN staff union in New York is approximately 6,400 but overall it is close to 20,000 (representing UNHQs NY staff, locally recruited staff in overseas peacekeeping missions and some of the departments that are governed by the Secretariat but their offices based outside of New York ie.United Nations Information Centres (UNIC)

The rest of the staff are not members of UNSU.

The spread of the coronavirus is being described as a pandemic. And at last count, there have been more than 360 deaths in mainland China where the disease originated, with over 17,200 infected, mainly in China, while it has spread to 27 countries and territories—even as researchers are struggling to develop a new vaccine to fight the virus.

The disease has plunged US stocks and threatened to disrupt the global economy as it undermines the import-export trade in China, the world’s second largest economy. At least three major US airlines – Delta, United and American Airlines – have temporarily suspended flights to China.

A swift appearance by its Director General on the spot indicated serious professional attention.

Obviously, he pointed out, the widespread epidemic across borders places limitations on both the efforts of staff professionally combatting the virus and those trying to perform their regular tasks worldwide.

“It raises a challenge on finding balanced action between the international community and one of the most widely populated member states, a permanent member of the Security Council (namely China)”.

That stretches way beyond the WHO framework to the whole U.N. system, said Sanbar, a former head of the UN’s Department of Public Information (re-christened Department of Global Communications).

He also suggested that perhaps an Administrative Committee on Co-ordination (ACC) –now under another title — composed of heads of UN agencies, funds, programmes and departments should meet to focus in such pressing issues under the leadership of the Secretary-General.

Meanwhile, a UN circular dated January 31 says: “You will have noted that the World Health Organization (WHO) has declared the outbreak of a novel coronavirus (2019-nCoV) as a public health emergency of international concern”

“While there is currently no known infection of staff and other personnel actively deployed within the Secretariat, the situation is being closely monitored and issues and options are being developed to both maintain the safety and protection of personnel and mitigate any impact on operations where possible.”

Precautions and prevention are a priority in supporting preparedness and response efforts across the Secretariat.  Multiple actions have already been taken, including strengthening preparedness of UN health facilities and initial efforts to raise awareness amongst all colleagues, the circular added.

A dedicated webpage has been established to provide all staff and other Secretariat personnel with more information.  Information on precautions and other preventative measures will continue to be added to the site.

“For any UN personnel who are free of symptoms, and returning from China, managers are encouraged to exercise flexibility in terms of using remote working arrangements for staff in these situations who would like to limit their contact with others and work from home for 14 days post travel,” the circular says.

A January 30 travel advisory by the US State Department pointedly says: “Do Not Travel to China due to novel coronavirus” — first identified in Wuhan, China, which has a population of over 11 million people.

Travelers should be prepared for travel restrictions to be put into effect with little or no advance notice. Commercial carriers have reduced or suspended routes to and from China.

The US has also placed additional restrictions and advised foreign citizens they will be denied entry into the US in they had traveled in China within the past 14 days.

This would apply to most UN staffers who are neither US citizens or permanent residents who are exempted from the new restrictions.

At this moment, said Nemeth, the Staff Union does not know if any UN staff member has been affected by this new directive.

“Nevertheless, we will continue to follow-up with the administration regarding this matter and should there be a need, we will recommend appropriate action to maintain the safety and well-being of staff”.

Moreover, the Staff Union also stands ready to assist any staff members with concerns, she declared.

The UN circular also says: “If you must travel to China or another area known to be affected:

Any individual who has travelled in China in the last 14 days and feels sick with fever, cough, or difficulty breathing should be advised to:

The writer can be contacted at [email protected]