According to an investigation, “the Nicaraguan subsidiary received funds that far exceed imports” of oil sent from Venezuela

HAVANA TIMES – The company “Alba de Nicaragua SA” (Albanisa) would be part of an “international criminal organization” related to “Petroleos of Venezuela SA” (PDVSA) to create front businesses for corruption purposes and launder money with the protection of the leaders of the ALBA countries, according to an investigation carried out by the US consultants Douglas Farah and Caitlyn Yates.

“In the case of Albanisa, the money provided totaled between 4 and 6 billion dollars of illicit funds during the last decade,” managed by “a small number of political elites” of the ruling Sandinista Front for National Liberation (FSLN) party, says the document. 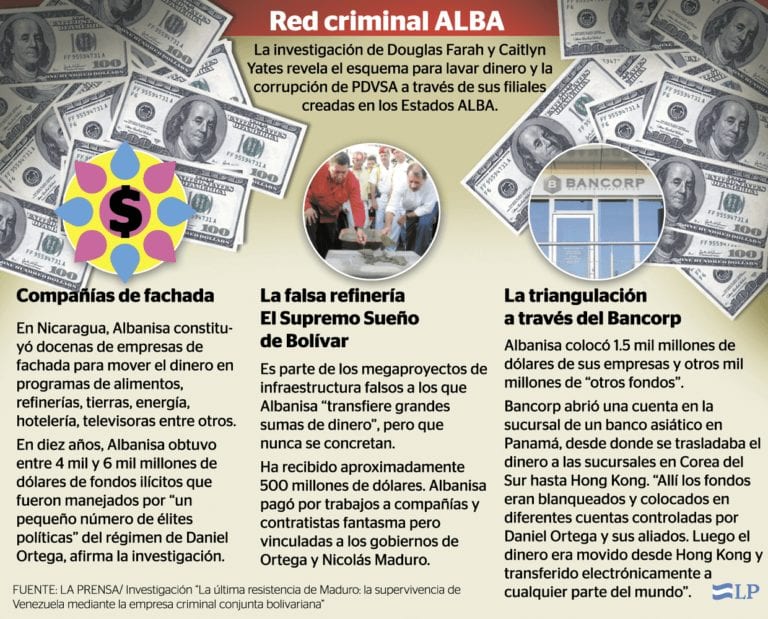 The report “Maduro’s Last Stand: Venezuela’s survival through the Bolivarian joint criminal enterprise” is the result of five years of field investigation, obtaining and analyzing documents in eleven countries.

It describes a “mafia network” created by the former Venezuelan President Hugo Chavez with the support of his political allies in Nicaragua, Cuba, Bolivia, Ecuador, Suriname and El Salvador, economic elites and criminal organizations that spread globally twenty years later, including the United States, Russia, to Hong Kong and financial tax havens.

It was possible to identify 181 individuals and 176 companies operating in at least 26 countries of what the investigation calls “the Bolivarian Joint Criminal Enterprise.” Among these in Nicaragua are Albanisa, its subsidiaries and the “Banco Corporativo SA” (Bancorp).

According to the investigation, Albanisa is one of the more profitable of the so-called criminal network, because “the Nicaraguan subsidiary received more funds that far exceed imports” of oil sent from Venezuela.

That company was created by Chavez and Daniel Ortega in 2007. PDVSA owns 51 percent and Nicaraguan Petronic owns the other 49 percent. The company is controlled by the inner circle of the Ortega family, through which during these years it controlled imports, refinement and distribution of crude oil and derivatives imported from Venezuela under the oil agreement.

[pullquote]Six (6) billion dollars is the estimate of money managed by Albanisa of illicit funds in ten years, states the research of the consultants Douglas Farah and Caitlyn Yates.[/pullquote]

Albanisa is part of the Bolivarian Alliance for the Peoples of Our America—Trade Agreements of the Peoples (ALBA), a political project of Chavez (now deceased) to counteract the political and economic influence of the United States (USA) in Latin America, replacing it with financial support of the oil agreement. At least, that is how it was sold.

However, the investigation reveals that since Chavez and now his political heir, Nicolas Maduro, used PDVSA to create a consortium of companies in the region in order to move the money defrauded from the Venezuelan oil company, as well as the proceeds of drug-trafficking, because the report asserts that there is a “merger” with the terrorist group Armed Revolutionary Forces of Colombia (FARC).

During these 12 years in power, Ortega has used the so-called oil cooperation to finance his political project with some assistance programs, giving productive grants, credit for family housing, mostly to FSLN supporters. However, most of the money has been used to buy hotels, TV channels, radios, cattle ranches, gas stations, as well as investment in hydroelectric projects, among others.

According to the report, “Alba Petroleos and Albanisa established dozens of companies and front companies where they invested heavily, at least on paper,” with the turn towards food production, financial institutions, airlines, study centers, alternative energy projects, acquisition of land, gas stations and other activities.

“Alba Alimentos” (food) and “Alba Generación” (power generation) are part of these subsidiaries, which are controlled by board of directors made up of FSLN “party stalwarts,” Government officials and of PDVSA, who avoid presenting financial reports to hide the details of these businesses, because most of them only exist on paper, indicates the research.

The researchers found that “the dynamic is that most of the projects that the oil companies claim to finance do not physically exist or produce goods or services.”

Refinery is only a façade

The refinery “El Supremo Sueno de Bolivar” (Bolivar’s Supreme Dream) was one of the flagship projects of the Ortega regime, which turned out to be a scam. It was said that in 2017 it should start operating, so that in 2020 it would be cover 41 percent of the hydrocarbons demand in Central America and 65 percent of diesel in the region. This is what Ortega promised ten years ago, but only the Miramar distribution and storage center have been built in the municipality of Nagarote, Leon.

Farah and Yates in their research found that this refinery is part of dozens of infrastructure projects designed by the Alba States to “launder funds,” by transferring large sums of money to “nonexistent” projects or that will never materialize.

Chavez and Ortega pledged in 2007 the construction in Nicaragua of a PDVSA heavy oil refinery. Then the estimated cost was of 6.6 billion dollars, “an absurd and economically irrational amount of money for such a project,” assessed the authors of the report.

“Around 500 million dollars would have passed through this project, leaving very few visible results. Multiple visits to the construction site between 2014 and 2016 only revealed an empty field with some storage tanks and a wooden fence, with no other sign of construction of a refinery, except the aforementioned tanks,” the report states.

La Prensa confirmed that it is possible to see the completed work done of the distribution and storage center. There is no indication of a second phase of the complex.

The investigation concludes that the refinery project has been used to move funds from PDVSA through Albanisa, from where there have been payments “for work never done and for nonexistent materials to contractor companies” that do not physically exist but are “linked to the governments” of Ortega and Chavez.

“These ghost companies—affirms the report—moved money, now ‘clean,’ back under the control of the criminal structures of Nicaragua and Venezuela.”

“Albeit the refinery was one of the biggest fake infrastructure projects discovered in our field research, it was just one of dozens of similar companies that laundered hundreds of millions of dollars with the support of the Bolivarian Joint Criminal Enterprise,” states the text.

Among the projects designed in the “criminal activities used by the company” Albanisa is Bancorp, founded in 2014 in Nicaragua. After being sanctioned by the United States, in February of 2019, precisely for managing the funds of PDVSA and Albanisa, the Bancorp board of directors announced its voluntary dissolution at being unable to continue doing business.

The research revealed that Bancorp, controlled by Ortega and “a group of his closest accomplices,” was part of the criminal network scheme for “bank to bank transfers,” to move “the abundance of resources” that passed through PDVSA and its subsidiaries in the Alba countries.

Bancorp operated as a depository of a 1.5-billion-dollar fund of Albanisa and its subsidiaries and more than one billion dollars “in other funds.” However, it is reported that although the bank was said to specialize in investment management, “it carried out very few regular operations” of a bank.

Large transfers were made to the bank in a short period of time. In December of 2016, all of a sudden 16 million dollars were deposited in cash; in 2017 deposits increased to 340 million dollars, “this despite the lack of clients or a clear commercial activity.”

Therefore, “alarms sounded” in the country’s financial system, because according to the research several leaders of the banking sector “met with officials from the US Embassy to assure them that they had no relationship with the bank of Albanisa.

The research indicates that since Bancorp did not have relations with correspondent banks to access the US financial system, a scheme was designed in Panama, Hong Kong and South Korea “to move the money out of Nicaragua.”

For that from Bancorp an account was opened in the Panamanian branch of an Asian bank (the name is not given), which in turn had branches in Hong Kong, South Korea and Panama, the report says.

“Thus funds from the Bolivarian Joint Criminal Enterprise were then transferred from Nicaragua to the Bancorp account with the Asian bank in Panama, to finalize its journey in the Hong Kong branch. There the funds were laundered and placed in different accounts controlled by Ortega and his allies. In that way the money could easily be moved from Hong Kong and transferred electronically to any part of the world, including the United States,” reveals the research.

That system of bank transferring of the oil money worked very well for four years, but everything changed after the sanctions to Bancorp by the US in February 2019, due to its connection to the corruption of the Ortega regime.

The report states that in “a bold move” Ortega ordered the State to buy Bancorp for 23 million dollars and become the National Bank of Nicaragua. Although the Ortega deputies in the National Assembly approved the transaction, the law was not published in time in the Gazzette, the official newspaper, the last step to legalize it.

After the United States reiterated the sanctions to Bancorp, its owners decided to dissolve it.