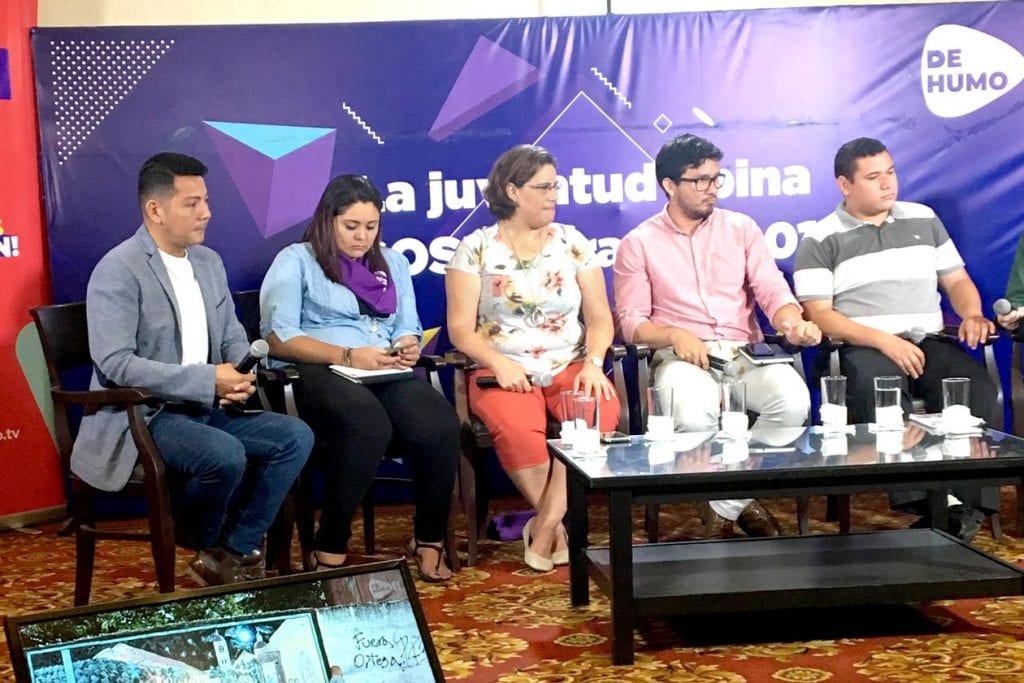 Participants in the online conversation, “Towards a Democratic Nicaragua” organized by De Humo TV, analyzes the role played by youth in today’s Nicaragua

HAVANA TIMES – Faced with the possibility of a new electoral process (whether or not it is moved up) in Nicaragua, how will young people ensure quality participation? Who will represent them? What sparked the fury behind the protests? These are some of the questions addressed in the digital conversation “Towards a Democratic Nicaragua”, a talk that convened students of the University Coalition, members of civil society, economists, lawyers and experts in citizen participation.

Dolly Mora, a member of the University Movement, said that the deep political crisis facing Daniel Ortega’s regime in Nicaragua has its origins in that “we have not learned from the historical processes”. She calls for a restructuring of the whole political and social system of the country.

During the discussions held under the hashtag #LaJuventudOpina, organized by De Humo TV, Mora said, “although it has been at a very high cost, the university students, along with workers and people from throughout the country have taken to the streets seeking real freedom and a true democracy, demanding justice for the innumerable abuses that have been committed by the Government.”

The struggle for autonomy

“As young people and students we are not only part of the national struggle, we also have a particular struggle for university autonomy and one of our slogans has been ‘Without autonomy, there is no democracy’ – in other words, we not only defend our rights as students, we defend the right of the people, and the right to access a higher education without political biases,” emphasized Alejandra Centeno, member of the University Coalition.

Other participants in the conversation included Dolly Mora, from the University Movement; economists Leonardo Labarca, Mateo Jarquín, and Salvador Amador; sociologist Elvira Cuadra; and human rights lawyer Braulio Abarca. Centeno explained that many young people would be willing to assume greater political responsibilities if necessary “for democracy and justice” but stressed that “we are still kids who need preparation and training to take on a public role with responsibility and relevance in the future.”

In this regard, sociologist Elvira Cuadra said that the reality of traditional politics has changed since April 18 when the peaceful protests began against the Ortega regime. “The youth can and have shown themselves to be capable of advocating without aspiring to power (…) the population has stopped believing in traditional political parties and is looking for new forms of participation,” she said.  Cuadra explained that young people are the agents of social and economic change in the country. “Several generations of young people in this country, at least of the last three generations, have changed their way of thinking about politics, their way of seeing politics and their way of doing politics.”

Young people are key to the future

One of the central questions of the debate was: How are we going to reach a democratic Nicaragua? For economist and business specialist Salvador Amador, when the possibility of elections approaches, “the first thing that must be guaranteed is the strengthening of the institutional framework, the reconstruction of the rule of law and returning to people their right to choose.”

Elvira Cuadra insisted that the main demand of the population is to generate a change, which implies a renewal with “new faces” at all levels in the State of Nicaragua.   For economist and Harvard student Mateo Jarquín, it is important to start thinking about a new economic future “for a more egalitarian society” in which there is more education.

“What we have to understand is that a more equal society is not only important for economic growth but also for the country’s political stability,” he said. Jarquín believes that young people are going to be key in this process of transformation and notes that it is essential that “the different sectors that oppose Ortega be constituted as a political force with a coherent vision for a post-Ortega Nicaragua”.  Along those lines, Dolly Mora said that the political involvement of the Nicaraguan population is more necessary than ever.

Concluding the conversation, sociologist Elvira Cuadra reaffirmed her trust in the youth of Nicaragua, saying “I believe in these new generations. Nicaragua can place its trust in the hands and leadership of young people who want to change the country.”
—–

For our readers who understand Spanish here is the full program: