HAVANA TIMES — If he were alive, the Honorable Robert Nesta “Bob” Marley, O.M. (Order of Merit), would have celebrated his 71st birthday on February 6.  Even with the thirty-fifth anniversary of his tragic death from cancer coming this May, Bob remains the most recognizable ambassador of reggae music the world over.  His timeless appeal and continued relevance stems in no small part from the stirring political, racial, and social consciousness painstakingly infused in his songbook.

From tracks like One Love to War (adopted from Ethiopian Emperor Haile Selassie I’s historic speech before the United Nations General Assembly in 1963), Them Belly Full (But They Hungry), Get Up, Stand Up, Concrete Jungle – and many, many more of his songs – Bob Marley used the bully pulpit of international music stardom to disseminate the treasure of his accumulated moral wisdom.

No different from the revelations of a learned Rasta elder “reasoning” in a sacred Nyabinghi drum circle in the woods, Marley’s lyrics offer much more than mere artful, pleasant sounding ditties set to an engaging tune; unlike lyrics of today, they are not window dressing whose only purpose is to accompany a deep base or gyrating beat.

Instead, through artful poetry, a beatific voice, and his magnetic charisma, Bob Marley spurred dancing and singing.  But critically, and I submit, the reason his music stands the test of time: Bob’s lyrics challenge listeners’ hearts and minds.  From staunch supporters to his fiercest critics, Bob’s songs force everyone to recognize oppression, unfairness, and inequality – in all its multifaceted, nefarious forms. 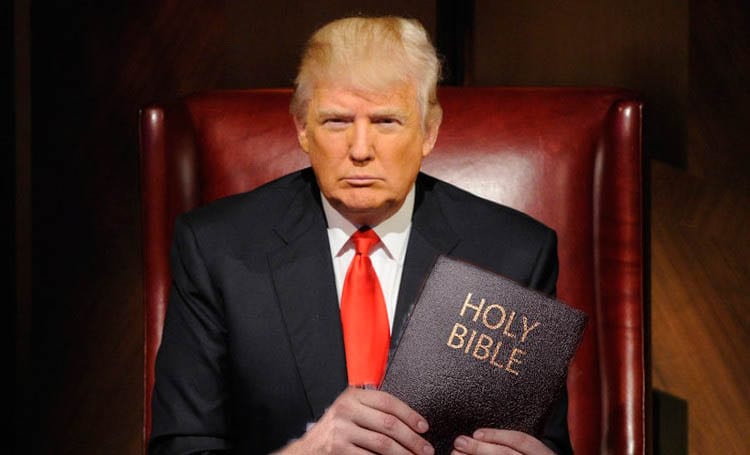 This is why there can be no doubt: If Bob Marley was alive today he would denounce – using the strongest, most acerbic terms – the leading Republican candidate for President of the United States, Donald J. Trump.  A small sampling of Marley’s discography and musical mainstays evidence the disdain the reggae star would have held for the billionaire mogul.

To prove the point, imagine the following hypothetical conversation between Trump and Marley, using each man’s publicly spoken (or sung) words except where otherwise indicated by brackets (“[ ]”).

MARLEY: [Donald,] [y]ou see[m] [like] men sailing on their ego trips.  Blast off on their spaceships.  Million miles from reality.  No care for [an average Joe], no care for me.”  (Stiff Necked Fools)

[Donald, don’t you know?] The greatness of a man is not how much wealth he acquires . . . . Don’t gain the world and lose your soul, wisdom is better than silver or gold.  (Zion Train)

MARLEY: Why can’t we roam this open country?  Oh, why can’t we be what we want to be?  We want to be free!”  (Three O’Clock Roadblock).

Let me tell you my friend if you gonna live this life, it’s not good for you to build strife.  (Craven Choke Puppy)

To divide and rule could only tear us apart. (Zimbabwe)

You can fool some people sometimes, but you can’t fool all the people all the time.  (Get up, Stand up)

TRUMP: [Ok, Bob, no more slogans.  But just so you know, so there is no mistake about this,] I do not wear a rug.  My hair is one hundred percent mine.

Mr. Trump walks off in disgust and Bob Marley shakes his head sadly.

About the Author: Stephen Cooper is a former federal and D.C. public defender.  He writes full-time and lives in Woodland Hills, California.