HAVANA TIMES — Many are the paths that took contemporary Cuban sculptor Wiliay Mendez Paez to the visual arts. In his pieces, painting, sculpture and poetry become tools used to delve into, reflect upon, evoke and question different socio-historical aspects of Cuba’s reality today.

Particularly interested in the creation of three-dimensional pieces, Wilay constantly moves across the frontier that separates the free-standing sculptural work from the installation piece.

As such, the use of physical space, a place where different experiences and ways of perceiving our surroundings (determined by the three-dimensional nature of the work) interact, becomes of crucial expressive importance.

His works also draw from Afro-Cuban traditions, as well as primitive and contemporary societies from around the world, whose wisdom and excesses combine to yield a critical, perspicacious and subtle poetic universe. 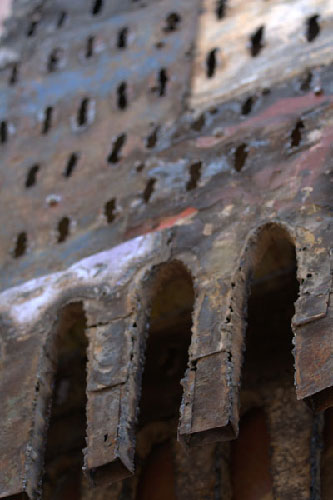 In his works, we catch sight of a creative process where a certain naivety co-exists with a hint of post-modern expressionism, a process which constantly accentuates the artist’s different concepts.

The artist’s expressive images and the symbols wrought with the different materials employed stage the perennial clash between life and death, a constant in the religious thought not only of African but also of numerous cultures around the world.

Metal is perhaps the most widely used, recycled material in Wilay’s pieces. The rust and surface impurities of the material act as a kind of conceptual cartography which underpins the work’s visual topography. For the artist, metal is to be found in a natural environment where organic substances and materials corrode, modify and transform it.

Describing himself as a run-away slave, Wilay lives in a small house in Artemisa, which he built himself on a lot of cultivable land administered by his aunt, working the land between artistic creations.

One thought on “Wilay: A Runaway Slave & Contemporary Cuban Artist”