HAVANA TIMES, Dec. 13 (IPS).- Rosa Maria Leyva was one of the first people to reach Caletones after it was ravaged by Hurricane Ike. It took six hours to clear the road between the small fishing and resort village — just one of seven seaside neighborhoods in this area destroyed by the storm — and the northeastern Cuban port city of Gibara.

The 20-km road between Caletones and Gibara, paved just this year, was torn up by the sea, which also destroyed almost every building in Caletones, leaving only a few sturdy government vacation colony structures standing, which are now being used as shelters for people who lost their homes in the hurricane.

“When we say that whole neighborhoods disappeared, we mean that nothing is left. We took back one person from each family, and some people couldn’t find any of their belongings, not even a pan. They’re still looking for their things among the mangroves,” Leyva, president of the Defense Council of Gibara, located 775 km east of Havana, told IPS.

“The first clothes and household items were donated by the townspeople. We relocated families in the vacation colonies for employees of state enterprises, and gave them the first mattresses” distributed by the government, said Leyva. 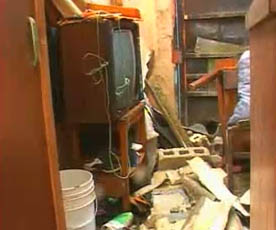 Three months after the disaster, the 41-year-old nurse — the first woman secretary of the governing Communist Party in this city in Holguín province — says “a lot has been done in this area to help people rebuild their lives.”

But while it “took a great deal of work but only a short time” to rebuild the road, restore basic services, clean up the city of Gibara, and replant crops to guarantee food supplies, it could take years to rebuild the homes that were destroyed, she said.

Naturally, there are many complaints. Some people protest that the construction material committees formed in the communities solve “small problems but don’t tackle the big ones”; some are asking to be given the materials directly so they can rebuild their homes themselves; and others want to know exactly how long they will have to wait.

“We must keep people informed, but we have to be careful not to make promises we can’t keep. It’s not our intention to fool people,” said Leyva, who has worked in the Communist Party for 10 years and has occupied the position of municipal secretary for the past year.

“In 1963, Hurricane Flora hit this area, but the damage was repaired very quickly. We know we’re making progress every day, but we also know that full recovery will take several years,” she said. Cuban President Rail Castro “warned us it would take time, but we knew that already,” she added.

NO TIME FOR COMPLAINING 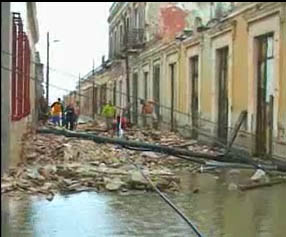 In one night, Hurricane Ike, with sustained wind speeds of more than 195 km per hour, damaged or destroyed some 19,000 homes, more than 70 percent of all of the housing in the municipality of Gibara, which has a population of 42,000. A similar situation was seen in other municipalities in northern Holguín province, such as Banes and Antilla.

An official report, published by the local newspaper Ahora on Oct. 26, revealed that 130,063 homes in this province of just over one million people suffered some form of damage. Of that total, 32,134 lost their roofs, 22,574 were partially wrecked and 18,819 were flattened.

More than a million cubic meters of solid waste — equivalent to the rubbish produced by the entire province in one year — was collected in just one month. Relief efforts focused on basic services, food supplies, public health facilities, and the greatest challenge of all, housing.

According to Communist Party provincial secretary Miguel Diaz Canel, the relief efforts in Holguín have been based on a three-pronged approach: immediate emergency action; designing and implementing a well-planned strategy; and using the pre-disaster situation as a benchmark to guarantee development.

“The most important thing is not to despair. We need to concentrate on erasing the scars,” Diaz Canel said in the television program Criterio Compartido.

Cuba was hit by three major hurricanes in just over two months: Gustav on Aug. 30, Ike from Sept. 7-9 and Paloma on Nov. 8. According to official sources, the three storms caused more than 10 billion dollars in losses, although thanks to the country’s well-oiled evacuation system, only seven people were killed. 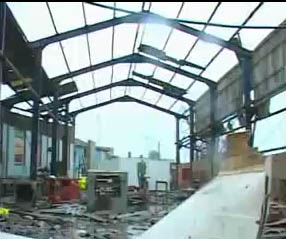 Despite the complicated situation, as of Dec. 7 the province had been able to repair the damages in 36,589 of the wrecked homes — almost 30 percent of all the houses affected. Another 7,363 were being worked on, and 9,950 temporary facilities had been built to provide shelter for families until a more definitive solution is found.

Of the 315,549 people evacuated by the authorities as the hurricane closed in, 5,758 have not been able to return to their homes, with 4,846 of them living with friends or relatives and the rest housed in government buildings.

The city is also conditioning a lot provided by a family to build new homes for hurricane evacuees, which will hold 48 “petro-homes” — constructions made from polyvinyl chloride (PVC) materials — donated by the government of Venezuela in the wake of Hurricane Ike.

“The houses are spacious, with three bedrooms, and we have to take good advantage of them by assigning them to large families. We know that there’s bound to be people who aren’t happy, because there are so many needs to address, but the important thing is that 48 families are going to be given an almost immediate solution,” Leyva said.

IN SEARCH OF ALTERNATIVES

In Gibara, the old clay roof tiles withstood the strong winds better than the newer fibrocement roofing. In rural areas, palm thatch roofs were also more resistant than the more modern alternatives, which were destroyed by Ike.

Why are some roofs more resistant than others? And why is it that, even when made from the same materials, some roofs withstand hurricanes better than others? These are questions that Holguín province authorities are asking in an effort to learn from the devastation caused by Ike.

The official report published in Ahora newspaper in October recommends that an assessment be made towards introducing changes in construction standards to build hurricane-proof housing and require that investors observe civil defense measures aimed at protecting the population from such disasters.

An option that is being pursued in Holguín involves a project developed by the Central University of Villa Clara, some 250 km from Havana, which promotes risk reduction in buildings through appropriate technology transfer, use of eco-materials (environmentally-friendly, economical materials), and local production.

In addition to encouraging the development of new construction materials, including artisan production of bricks made from industrial waste, Leyva is closely studying the few roofs that were left standing in Caletones. “Only vaulted roofs withstood the storm. The key seems to be in the arc shape,” she said.

“Vaulted roofs are built with bricks, cement and a minimum amount of sand, making them a very attractive alternative. Sand is the most problematic element in the country. We face all sorts of problems, but what really prevents us from speeding up recovery efforts in housing is sand,” she told IPS.