HAVANA TIMES — The afternoon settles in Havana and young people who sell their bodies begin to throng on the sidewalk in front of the Payret cinema. The young men and women sell themselves for nearly nothing. An hour or an entire night of pleasure, or all the time needed to satisfy the lustful cravings of those who pay.

As night falls, the crowd begins to grow and the competition becomes more intense. When a group of tourists nears, the young men and women prepare for battle: they straighten out their clothes, take out cigarettes, ask for a light, smile, make suggestive gestures. They are willing to do whatever is asked of them.

Cubans are charged a little less than yumas (foreigners), but these working kids will bargain with anyone if they’ve gone many days without taking in enough. They have to eat and pay the rent, after all. They have to buy the documents they need to stay in Havana for at least six months and bribe the police so they won’t detain them for harassing tourists.

They also have to pay to be there, making a buck. If they don’t, they are sent back to their provinces of origin in the interior, and there isn’t much they can do there, at least nothing to feed their hopes that they will one day be able to stop selling their bodies.

In contrast to La Rampa, located in the very heart of Vedado, or the more popular discos in Miramar, the Payret and Parque Central sidewalks are the areas where Havana’s cheapest prostitutes work.

Just about everyone passes through those two areas: tourists who have their pictures taken in front of the Capitolio, where the Cuban Senate once convened, common Cubans who wait for hours for a bus to take them home after a day at work (which was just as exhausting as the wait), others who have a bit more money and go into and come out of stores or line up at the entrance of a luxury restaurant.

The crowd looks fairly uniform, but it is in fact made up of well-defined groups of people: those who have, those who have little and those who hope to get lucky that afternoon or late into the night.

To sell one’s body near the Payret cinema, one need not be as sophisticated as the taxi-boys that abound in the vicinity of luxury hotels. With a pair of jeans and a tight-fitting shirt over a buffed-up body, one can get enough to live on, and even to support one’s family.

“It’s a job like any other,” says Daynier, a young man who tries to explain to me the difference between a male prostitute and him, who also does not accept being called a pinguero, which is what the young men of the sex trade are called in Cuba.

Daynier is twenty-six years old. He was born in Niquero, in Cuba’s eastern end. He had to support his family and couldn’t find a job that gave him enough, not even to buy food, clothing and rent a small house where he could see his children grow up. Desperate, he decided to move to the capital. Even though he found work in agriculture – skirting the law that regulates the internal movements of people in the country – he still wasn’t making enough to live on.

It was his brother – a pinguero like him – who introduced him to the “trade.” In one night, just from selling his body, he managed to earn much more than what he did working for the State the entire day. All he had to do is stand at a street corner, put himself on display and wait for someone to approach him.

There are days in which Daynier doesn’t even make a penny, but then he gets a run of good luck, especially in high tourism seasons, when he can take back home the clothes and things he was never able to buy with his previous salaries.

“Maybe one of the people who pay for an hour with me will decide to take me with them out of the country one day,” he says to me, with different words, and begins to describe to me what his life would be like somewhere else. He speaks of the future for his wife and children he dreams of.

Something like that happened to his brother. He shows me the picture of a beautiful little kid next to a brand-new car, in a distant country. He smiles. He’s dreamed of having all that a thousand times. He’s not a “male prostitute”; he’s just a “guy who works real hard to get ahead,” he tells me with a strange sense of pride that feels more like a rationalization, a childish defensive strategy. 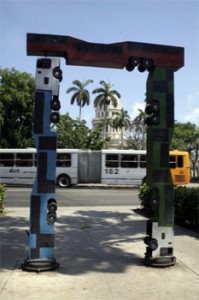 During our conversation, other young men like him walk the streets, from one corner to the other. Some are alone, strolling across the sidewalk, going around Parque Central. Others have already found company and head towards nearby stores, where they buy expensive cigarettes, perfumes, beers, something they’ve wanted for a long time.

While they listen to the promises of their customers, they allow themselves to be touched, flirt with, seduce and please their companions, as the initial price agreed on may grow thanks to that. Perhaps they will find the exit door, the big prize, that night.

The hours go by, but the toing-and-froing continues. Young men fill all the benches at Parque Central, looking everywhere for a potential customer. They drink profusely, smoke and prepare – no one knows what’s in store for them that night.

“They’re all after the same thing…no one comes here unless they’re looking for cheap sex,” Daynier tells me and goes quiet for a few minutes. He looks around him. He’s realized I am not a customer, that I’m just a weird guy asking him annoying questions, a curious person he won’t get anything out of by revealing these things. He’s realized I don’t want to rent him for the night.

However, he’s apparently embarrassed to tell me he has to get back to work, that it is getting late and the chances of earning some money are decreasing. He’s seen a group of tourists go by and intuits there is a chance of success there.

An old, fat man has stopped to look at him. He takes a picture of him, and then some more. Daynier smiles at him. He knows what this man, who’s walked away from his group, wants. He says goodbye to me, patting me on the shoulder. He walks somewhat hurriedly towards the fat man, takes out a cigarette and asks for a light.

23 thoughts on “Young Men for Hire in Havana”