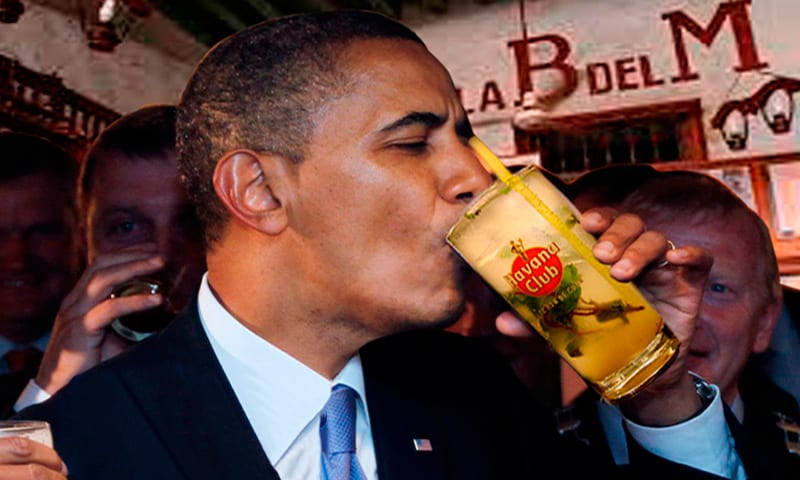 HAVANA TIMES — Calvin Coolidge, the only US president to ever visit Cuba, didn’t run into any major problems while on the island, save, perhaps, the annoyance of having to evade waiters who offered him mojitos and daiquiris, unaware of the fact that Prohibition forbade the consumption of alcohol in the United States.

Obama’s greatest challenge will be avoiding the poisonous darts thrown at him from both ends of the spectrum. On one end, they would want him to put an end to his rapprochement with Cuba, while, on the other, they would like to see him like a Santeria practitioner, dragging himself across Havana on his knees.

Cuban negotiator Josefina Vidal welcomed his decision to visit, saying he will “be treated with the utmost respect and deference.” Here, he will be able to see the changes that have taken place over recent years, “as a result of the Cuban government’s sovereign decisions.”

One of the spokespeople of extremism, however, has published a text brimming with tough-guy boastfulness, concluding the piece with a threatening statement: “let the beast come over, we’re waiting for it.” This way, he proves Churchill right in his claim that adversaries sit at the bench across from you but that the true enemies are inside your party.

At the other end of the spectrum, dissident Jorge Luis Garcia “Antunez” writes that “the presence of President Obama on the island constitutes a very negative gesture; we consider it an offense, an act of disloyalty.” He charges that his visit will give “the regime legitimacy.”

Across the pond, Ted Cruz and Marco Rubio try to reap electoral advantages from the situation, and Congresswoman Ileana Ros-Lehtinen says it’s “absolutely shameful that Obama is rewarding the Castros with the first visit to Cuba by a sitting American president” (Did she forget about Coolidge?).

What’s truly worrisome for extremists at both ends, what they most fear, is not the symbolic significance of the trip but the intentions of Barack Obama and Raul Castro to take the rapprochement process to a point of no return.

Even Deputy National Security Advisor Ben Rhodes acknowledged, during a press conference, that “the US government is looking for a way to make this policy change irreversible, and Obama’s visit will help in that direction.”

There’s much speculation both leaders seeking to make the reestablishment of bilateral relations between the two countries their personal political legacy before the end of their mandates. This is certainly true, but it is only part of the truth.

Through talks with Cuba, Obama seeks to grow closer to a region where the United States is losing influence, despite the fact they once believed it to be their “back yard.” Rhodes insists Cuba is one the reasons why “the United States was isolated in our own hemisphere.”

Both presidents have been able to overlook certain obstacles to sit down and talk. Raul Castro did not make this conditional on the lifting of the embargo and Barack Obama didn’t demand a change in Cuba’s political system. They acted differently and obtained a different result.

This way, the leaders have been able to converse about the exchange of prisoners, mutual debts to settle, migration, the fight against drug and human trafficking, the protection of the environment and disaster responses, the embargo/blockade and even about human rights.

These exchanges breed empathy, that is to say, a better understanding of the points of view of the other. Ben Rhodes declares that “We’re always going to have differences with the Cuban government on the issue of human rights because they have a different political system.”

That declaration marks two immense changes. In the first place, it reveals acceptance of a “different political system” in Cuba. Second, the United States ceases to be the judge of a Cuba accused of violating human rights and becomes its equal, albeit with different perspectives.

Many criticisms can be leveled at the two presidents but their legacy will endure because, beyond the success they have or not, the truth is that no one before them dared make so much progress under the cross-fire of their enemies and, most importantly, their friends.

12 thoughts on “Obama to Face Cuba Crossfire in Havana”