Text and photos by Yusimi Rodriguez 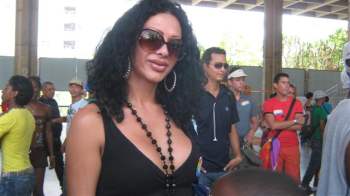 HAVANA TIMES, May 18 — I’ve been coming to the annual “Campaign against Homophobia” activities since its first edition here in Cuba in 2008.  One of the things that always catch my attention is the number of very tall women with long hair who radiate sensuality in each gesture.

Any stretch of ground becomes a gangplank.  You can’t help but look at them – and they know you’re looking.  They’re accustomed to people wanting to photograph them or to take a photo with them as a memento.

Being humans you would expect them to get bored, but they don’t.  Every time someone asks them to pose, they do – and with a smile and all the charm of a professional model.  However, when you get around them and begin to pick up on the details, you note characteristics that are almost implausible for a woman – the perfect breasts, the well-defined calf muscles, that dark shadow on their faces, and then there are those voices… Could these really be women?

I think that yes, because they’ve chosen to be them.  Moreover, they’ve struggled to be women.  Don’t be surprised if you run into one of them in the line for the women’s bathroom.  That’s where I met Isabel, or “la China,” who I had photographed several hours earlier.  It was her turn to use the bathroom and I was waiting for her to go in, but she let me go in ahead of her – a vestige of gentlemanly chivalry or simple kindness?  What difference is there between this woman and me, beyond the biological?  What does she think?  How is her life behind all the glamour?  What do men look for in her?

With the greatest ease and naturalness, she agreed to an interview when she came out of the bathroom:

HT: When did you become a transvestite?

HT:  And your breasts, did you get them with the help of hormones?

Isabel: In the beginning I took hormones, but a year ago I had implants put in.  They’re better and less damaging to one’s health.

HT:  Have you thought about getting a sex change operation?

Isabel:  Absolutely not.  I’m a transvestite, not a transsexual.  There are differences.  Transsexuals think like women, while transvestites have a feminine image but their genitals are masculine, which is what men look for;  in fact it’s a “key”… it’s very complicated, understand?  They are fantasies that men have, homosexual experiences that perhaps they don’t have with men due to their self-consciousness, their manliness…I don’t know, their machismo.  They see us in the image of women, with breasts, but in fact what they want is to feel is a homosexual orgasm, and ultimately they find that through us.

HT: How has your life been since you decided to be a transvestite?

Isabel: I love it.

HT: But society, and your family? 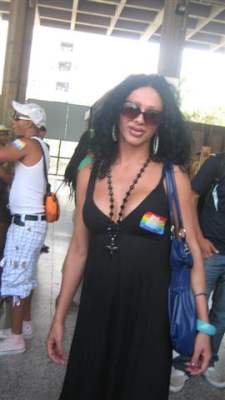 Isabel:  That was a little hard.  It wasn’t easy, because before anything else I had to face my family, society and the police.  I suffered a lot of recrimination.  But well, with these activities that are being organized now, against homophobia, people understand us a little more.

My relationship with my family is divine now.  In the beginning I had some obstacles, but I’ve been overcoming them.  I explained to my family that this isn’t some illness and it’s not contagious.  I told them how they have to accept us as we are because in the end, what are we supposed to do?  Abandon them? Leave them to one side and remake our own lives?  Being together can be better, we strengthen each other a little more.  They cheer us up.  Because it’s not easy for us gays to have society discriminating against us and then have our own families discriminating against us.

At the beginning they were shocked with what  people would say, but later that changed.  Right now things seem a little more natural… I get along with everybody, with heterosexuals, with bisexuals, with all types of people.

HT: Today I’ve seen many transvestites acting and imitating artists.  Do you also do that?

Isabel: No, I don’t like it.  That was never born in me.  I work for society.

Isabel: I work in an office of OFICODA [the food rationing agency], in customer service.

I then remembered the documentary Ella trabaja (She works), about transvestites working or looking for employment in our society.  One of them in fact worked in an OFICODA office.

Isabel: But that wasn’t me in that documentary.  It was a friend of mine.  I began working there later, at the end of 2008.  I’m also a health promoter for CENESEX [the National Center for Sexual Education], since 2005.  I inform people about the ways of contracting sexually transmitted diseases.  I give them advice, I help them.

HT: Did you study some profession?

Isabel: I studied industrial pharmacy, but I dropped out in my third year.

Isabel: Because at that time I had already entered this world.  My family chastised me, I had many things going against me and I got confused… With my having to give up my daily life with my family, I decided start a new life in all this.  Though they didn’t understand me, my friends did.

HT: Do you like the work you do with the public?

Isabel: I love it. 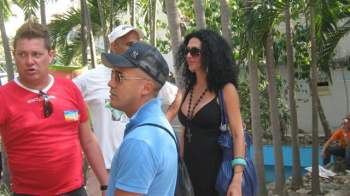 HT: How do the people you have to assist respond to you?  Do they realize that you’re someone who was not born a woman?

Isabel:  Some yes, others no.  The majority of those who go there are elderly people.  Many of them treat us like women, and if they’re men they treat us well too.  People there are pretty friendly.

HT: Do you have a boyfriend? Is it hard to get a partner?

Isabel:  No way.  We have plenty of men, really.  But getting a partner is a little difficult.  Right now, as you know, we’re living in times of a lot of materialism, a lot of using.  For that reason I prefer to be alone.

HT:  Tell me something, when you go in women’s bathrooms, don’t you worry that someone will approach you and try to kick you out?

Isabel: No, I have a very feminine image.  So far that hasn’t happened to me.

Isabel asked my name before saying goodbye and we shook hands.  “You can call me Isabel or La China… or Israel,” she then said.  But if I meet her again, I’ll use one of her female names.