HAVANA TIMES, Jan 3 — William Hernandez is a Venezuelan percussionist who’s in love with Afro-Cuban music. This past November(*), he and the Muñequitos de Matanzas performed using his creation: “el cajon,” which he also calls the “Obba Drum.”

It’s a box with which one can play various musical styles and create the sounds of many different instruments, some of which are used in Afro-Cuban music.

“I created this cajon during a difficult time in my life. I was going through a serious bout of depression because a child of mine who was only three days old went to heaven. I never thought that at the hardest moment in my life I would make an instrument that could give so much joy,” William explained.

Humbly, he demonstrated the virtues of his work to me and answered several questions.

HT: Do you construct other types of drums, like congas and batas?

William Hernandez: I used to make bata drums, but I don’t any more. Now I only make cajons, because the bata drum is complicated. I make the bata in one piece, so it’s too much work for what people want to pay for such an instrument. The cajon that I make is original. No one had ever made one like it before. 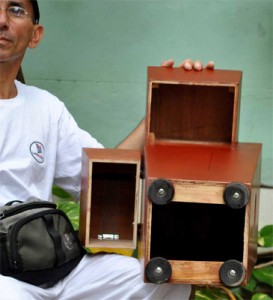 HT: How did you learn to make drums?

HT: What are the advantages of this cajon?

WH: It’s a very lightweight instrument, it weighs 11 pounds and it’s easy to maneuver. It’s designed to be played sitting at a height of 26 inches, which is the height of a piano bench. In that way the spine is completely straight.

It has a very smooth surface to avoid damaging the percussionist’s hands. On its surface one can generate different sounds and rhythms: guarapanchangueo, bolero, the three bata’s, high and low congas, funk or rock.

You can play everything, from flamenco and Peruvian to reggaeton, and some Afro-Venezuela music. To play a rumba, you hold the clave in your left hand and the right hand makes a tumbao and three hits. It’s an aid for the percussionist-artist to improve their abilities. 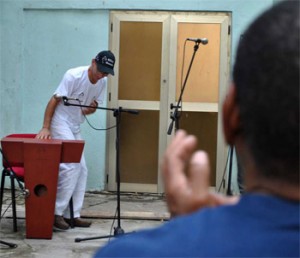 HT: What kind of wood do you use?

It’s a one-third inch thick composite, with the top surface of the cajon made of a tenth of an inch sheet of cedar.

HT: Have you been able to sell them?

WH: Yes, right now there are cajons in New York, Canada and Italy. There have been several recordings made with it. Alejandro Sanz used one when he recorded a song with Sting and Alicia Keys. One was used in the first production of Carlos Martin, the percussionist for Alejandro Sanz and also the arranger for Niña Pastori, who was nominated for a Grammy; one is used by Michael Ciro, who’s a guitarist and the musical director for the bands of Alejandro Sanz and Maria Carey; the African bass player Armand Sabal Lecco also has one. In Venezuela one is used by the percussionist Vladimir Quintero, who has spread it throughout the country.

HT:  Are you interested in introducing your cajon in Cuba? 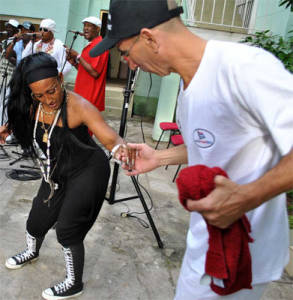 WH:  Yes, sure, anywhere in the world.

HT:  It seems great for young musicians who don’t have a lot of money. Here it’s difficult to acquire a conga or a set of bata drums, but with this it would be much easier for them.

WH: Well, yes, let’s see if an agreement is struck between Venezuela and Cuba with the ALBA market, but since I haven’t received the support of the Venezuelan government, I’m doing all this with my own money. If they would support me it would be great to bring my instrument to Cuba to market it.

HT: You said you weren’t well versed in Afro-Venezuelan music. Why not?

WH: Because I’ve lived 27 years playing Afro-Cuban music, and music is like food: you’ll eat what you like. I don’t live Afro-Venezuelan music but that doesn’t take away me being Venezuelan or make me more Cuban than Venezuelan, because music is the world that doesn’t belong to anyone, it doesn’t belong to a color or a race or a religion. When I make a cajon I don’t think about whether it’s going to be played by someone who is black, white, yellow or green – I don’t care. What I think about is that it’s a necessity for me and a contribution to African music.

(*) During that November performance, William joined in with the audience and danced to the rhythm of the Muñequitos percussionist group, which pulled out Obba Drums, cajons made empirically. To see him dancing, anyone would have thought that William was a Cuban rumba dancer.