HAVANA TIMES, April 18 — Adolfo “Fito” Cabrera and Miriam “Mirita” Real are a couple who have taken up the challenge of independent artistic production. In a country marked by institutional inertia and the omnipresent shadow of censorship, they defend thematic autonomy and opt for dialogue whenever possible.

They are working together on two projects: “Garaje 19,” a name that arose from a real physical space — a garage — which has been the stage for everything from visual art exhibitions to poetry readings and performances.

The other project is “Miscelaneo” (Miscellaneous), a video production. One of its achievements is the documentary Despues de Paideia (After Paideia) which unearths the story behind one of the most independent literary projects among Cuban intellectuals in the 1980s, though it later dissolved into the dust and scattered (with participants having lifted their wings into exile or withdrawn in fear).

Former members of the controversial and multidisciplinary group “Omni,” Fito and Mirita are expressions of the reverberation that is shaking Cuba at this very moment through art that isn’t waiting for the official media – instead, they’re generating their own alternative channels.

Fito: I don’t think we were trying to create a group to do what we did. We were already working on something and we were searching for an identity. The idea was to create an audiovisual production, something very basic of course. There then emerged the project of co-producing a kind of magazine. We wanted to feature other alternative events but in a way that would seem like an underground television station, one with a variety of internal sub-themes all connected with social and artistic aspects.

At that time we were mapping “Talento Cubano,” which meant we had to meet with lots of musicians throughout the island. Later we produced the video “Rotilla 2010,” and we further altered the idea of the documentary, making it like a reality show.

HT: I’ve seen tee-shirts with the words “Talento Cubano” on them, but I’m not quite clear what it is.

Fito: It was the brainchild of Adrian Monzon, a former member of the Matraka band. We made a map of Cuban musicians to put on a website. We were interested mostly in those who were unable to promote themselves. We weren’t serving as mediators, because Talento Cubano isn’t a company, we created virtual spaces for each band or group, and not for money.

But I’m forgetting one point without which we wouldn’t have made it here. That year, Etian (a rapper with the Brebaje Man group) produced his album “Poco Bonito” and we made copies of it and developed a promotional campaign. That’s how the music video came into being. It had the main cut from the CD, and later we began producing concerts.

HT: Was that how the Los Aldeanos concert at the Acapulco Cinema came about?

Fito: That’s why it’s like an experience, everything is mixed in. Although that Los Aldeanos concert was more of an action by Talento Cubano as a team, there was also Garaje 19 and other groups. This was how the idea came up for a concert with Anonimo Consejo and Etian, who were both launching their albums. We produced the videos and tried to get them on TV, on the “Lucas” music-video show, but the only one they showed was Etian’s. The one by Anonimo Consejo was censored.

Fito: I think they were interested in it at first, and that’s why they played the music, but without the images. Then Cruzata (the program director) explained that the video could be interpreted as an incitement to emigration, which is what made us realize that they hadn’t understood it.

HT: Is it objectively possible to be an independent producer in Cuba?

Fito: Well, I know a lot of them. They function, but they’re more like micro-producers… Some of them came out of the film school environment.


Fito: I think it’s more a question of technology, which is now more accessible to more people. Some people use it to promote their own work, such as musicians. I see it as a means “professionalizing,” of course in small steps, with what you have, but so that nothing stops your creative capacity.

Fito: Yes, one of recording ideas, disseminating them and promoting other forms of creative thought. It’s not only about being an artist but also being a producer. It comes from your own dynamic of work. I’d say it’s a democratization of how artists can produce their art. Now artists can choose the directions in which they want to move, and of course that encourages responsibility.

HT: What are the advantages of being an independent creator-producer?

Fito: The main advantage is that among those micro-producers there’s a level of horizontal collaboration. There’s a common understanding that everyone does what they’re doing. That’s why I was telling you that it’s very democratic; groups support each other and provide each other with services… Maybe ten years ago we couldn’t have done that.

HT: Ten years ago our thinking was much more rigid…

Fito: But now that’s simply giving way. Sure, even with the opening provided by technology you sometime lose your perspective on the video your making, and people from right here aren’t seeing it. I think that in that sense, many people should turn inward; in other words, it’s not just putting material on the Internet and getting it known abroad. I’m sure that exchanges on the island would produce new ideas among us here.

At this point in the conversation I turned to Miriam:

HT: How did “Miscelaneo” emerge?


Mirita: It came out of the producers’ workshop we did in the Vista Alegre neighborhood, in Havana’s Vibora community. But the first time Miscelaneo was shown was at the Casa de Gaia. It arose primarily as audiovisual producer, it can generate an event but the end result is always a documentary.

HT: Are there any topics that interest you more than others?

Mirita: I don’t have any defined issues. I’m just as interested in a poet as in a writer or a graffiti artist. It’s what comes out at the moment, but what interests me is doing social activism through art. I want ordinary people to know what has happened with these projects, those that are here and those that are gone. I’m interested in talking about the truth that isn’t seen, what’s being done or was done, how, why… because often projects are demonized and the stories behind them aren’t known. But we’re also interested in finding a place to present this documentary, so that those people without Internet access can see it.

HT: What is social activism to you?

Mirita: For me it’s giving people a range of possibilities to see, do and to cultivate. It’s giving people the opportunity to disagree with your thinking, so that your thinking isn’t alone. Look, we had this experience with the video “RG 19,” when they called from a province to say they had seen the video and that it was also being used as classroom material at the Superior Institute of Art… So it’s like popping a hole in the bubble and letting out other information.

Fito: For me it’s creating and also recording. It’s not sitting around waiting for someone to come up to you to see what you’re doing. It’s action, interaction, something that art has experienced without having that name. It’s a kind of dynamic that excludes the (official) media – it’s direct promotion.

HT: Like the same idea about creating an alternative channel?

Mirita:  Exactly. That would be great, a channel where you can show works without being told: cut a little here, cut a little there…

HT: But if they fully respected a video, would they agree to broadcast it over the government media, and by this I mean television?

Fito: It would be one avenue more, and I would take advantage of it, but it wouldn’t be ideal for me. I don’t see that as a goal for what I’m doing. I think that this medium lacks things that are vital for me as an artist. Hell, I’d rather show it on a corner.

HT: What if there was a channel on TV for only presenting alternative projects?

Mirita: And without censorship? Well yes, if this were a meeting point for reflection.

HT: Do you work with the anticipation of possibly being censured or do you feel free to address the issues you want?

Mirita:No one feels free to address the issues they want, but we don’t allow censorship, either internally or externally. We know that when we do a presentation we can be told no, but we work thinking we’re going to be able to show what we create. 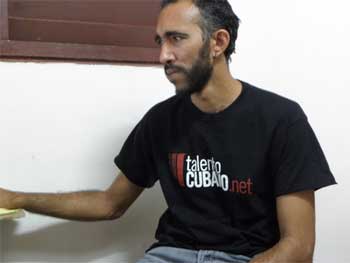 Fito: We’re aware of the environment in which we live. One time they censured the presentation of our first DVD, at the La Casona de Linea center… Also, at the event “Proposiciones” (a project sponsored by Pablo Milanes) we couldn’t put the poster for Talento Cubano on the stage, we could only put up the logo. This is to say that not even PM Records is exempt from censorship.

HT: What was the problem?

Mirita: I think that the Ministry of Culture was afraid that Talento Cubano would do what they had never done: create a platform of contact for all musicians.

Fito: But it was more than that. It’s been said that the joint sponsor of Proposiciones and Talento Cubano had a history in Eastern Europe and that we wanted to do the same thing through these projects in Cuba.

HT: A history of overthrowing the government?

Fito: Yes, and that I was connected to Otpor,  which is a lie. With regard to other institutional spaces, presently there’s indeed debilitation and censorship in this regard. People don’t think about those things anymore.

HT: One last question: How would the Cuba of your dreams be?

Mirita:  Democracy. Opening. I think Cuba needs change, a transition. I think everyone has the right to think like they think. Several parties have to exist, several television stations, but everyone having an opportunity to participate, and I think that this would work if we all played a part. Cuban talent is underutilized and a lot needs to be done.

Fito: I think of a Cuba that generates possibilities rather than destroying them – opening doors, not closing them. This negative action against all initiative is what turns out to be so destructive and it’s also a metaphysical struggle, between good and evil.

I’m not thinking in terms of the future, but rather the present. Change is inevitable. Some might say that it’s coming, but it’s already happening. Cuba as a social phenomenon isn’t unrelated to the world. Despite the fence that we’ve had around us, now it’s almost transparent.