Speaking exclusively, one of Nicaragua’s most respected bishops told us about the most powerful moments he has experienced since April 18, among other aspects of his life.

HAVANA TIMES – Three moments since April 18 have strongly marked Silvio Jose Baez, the auxiliary bishop of Managua and one of Nicaragua’s most respected priests, called “quarrelsome” by President Daniel Ortega.  One of those moments was the murder of the first young man by the National Police near the Polytechnic University (Upoli).  He cried as he watched the news that day, realizing he was watching the social uprising he had predicted but had never imagined would come so soon.

The night before April 19 he wrote on his Twitter account:  “I call on Daniel Ortega and his wife to halt the violence and repression.  Don’t put the country’s peace in danger!  Know how to listen, dialogue and be mature enough to rectify so many errors for the good of Nicaragua.  Be reasonable!”

However reason wasn’t to be found at the presidential compound of El Carmen, and as of July 19th, Baez went from “quarrelsome” to being considered a “coup-monger” together with the rest of Nicaragua’s Episcopal Conference in the eyes of Daniel Ortega’s regime, which has by now caused the death of more than three hundred people, thousands of wounded, and hundreds tortured and imprisoned.

His peace initiatives in Masaya and Diriamba together with Cardinal Brenes are the other two experiences that have most moved him since the civic rebellion exploded.  On both occasions he again used his Twitter account to call for a halt to the repression.  Again the call was ignored.

For Baez, the university students became the country’s moral conscience, heading up an “ethical revolution” that awakened all of society, which out of fear or other motives had been silent or had never had the opportunity to express their deepest desire as citizens.

“I always believed this society was going to wake up,” Monsignor Baez told Niu, “because there were deep-seated structural problems socially, politically and economically.  Those young people awakened all of society to the realization that Nicaragua could be different, could be better.”

The Church that made the regime uncomfortable 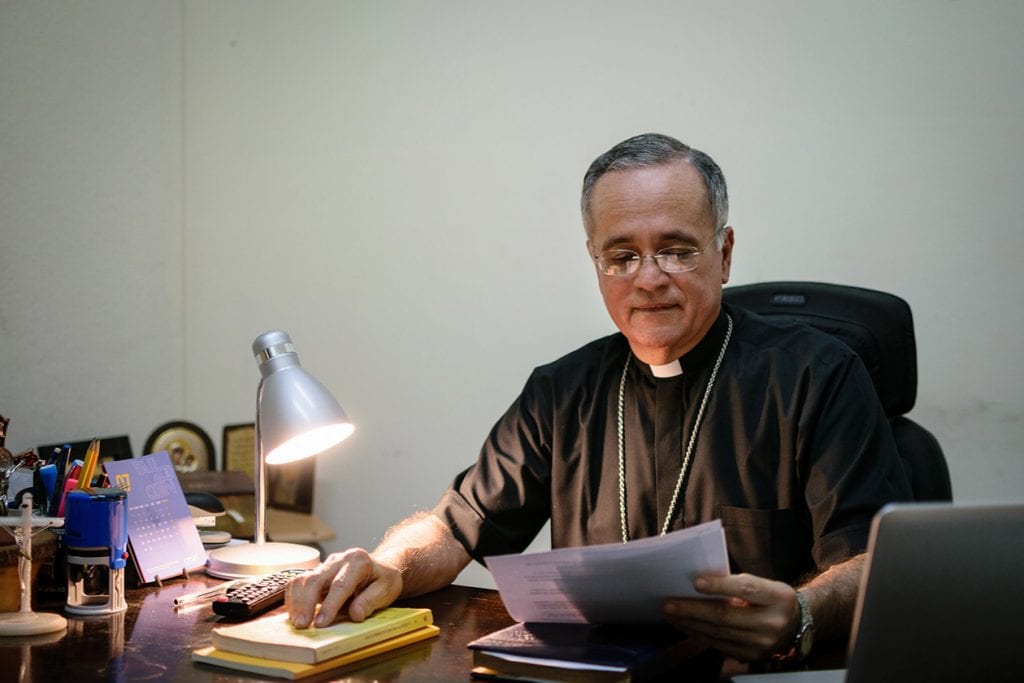 From the onset of the crisis, in the midst of the confrontations, the Catholic Church, with its priests and other religious workers, has taken to the streets in defense of the people, as both mediators and to request peace and an end to the governmental repression.  The population has welcomed these actions, which have created bonds of empathy even with non-Catholics and non-believers.

Baez believes this has been “God’s opportunity” to show the Church’s true face, one that many didn’t know and that the religious workers had not had the chance to demonstrate.  But that face of the Church has irritated the Ortega regime, which has accused the bishops of being the promoters of a coup d’état.

“In a society where authoritarianism, ambition for money and power, lies and violence prevail, an authority that comes out in opposition to these anti-values will logically create discomfort,” explains Baez.

The bishop described how the government has manipulated the Church’s explicitly religious dimension, its language, images and saints’ days, but assured that “the Church isn’t only that; it is also solidarity, service and closeness to those who suffer, being with the victims.”

He adds that “when power has become distorted and is no longer at the service of the majority, that face of the Church obviously becomes discomfiting, so we are subjected to ridicule, threats, attacks, slander and persecution.”

His trip to Diriamba and Masaya

Baez tells how his trip to Masaya led to the realization of “how great the Church’s mission is” as a sacrament of freedom and hope designed to “be a builder of peace and consoler of human beings.”

On the other hand, in Diriamba the question was raised about “how it was possible that there could be people filled with so much hate, and capable of so much violence and irrationality.”

He never expected it would be the same in both cities, as it was clear to him that Diriamba was under siege by paramilitaries after a weekend that left at least 11 dead.  Nonetheless their mission was to free a group of paramedics and Franciscan missionaries who had taken refuge in the church.

“It grieved me to see Nicaraguan people in such an aggressive attitude,” he recalled.  “We Nicaraguans aren’t like that.  This is a happy, peaceful, honest, hard-working people, so I saw that with great pain.”

Nor had he imagined that that they would receive such fever-pitched verbal and physical aggression even in the company of Cardinal Leopoldo Brenes and Apostolic Nucio Stanislaw Waldemar.

“At that moment, none of the verbal or physical aggression we might have suffered could equal the pain I felt for those Nicaraguans so filled with hate and so aggressive,” he lamented.

Baez assured Niu that Pope Francis is aware of the Church’s situation and of the attacks on lt.  “I can verify that the pope is very well informed about what is happening in Nicaragua.  I have personally had the opportunity on two occasions to converse with him.  The pope is totally supportive of us bishops at this time,” he assured.

“Jesus would defend the unprotected”

“If Jesus were here today in Nicaragua in his human condition,” Baez assured, “he would do the same thing he did back in his time, “but today he would do it in another context.”

“So it is up to us, as Christians,” he commented, “to behave as he would, not only in our personal, family and professional life, but also within the economic system, in our political options, within the construction of society and exercising our rights and duties, seeking the common good.”

The prelate explained that there is a narrow sense of politics, which is party politics whose purpose is to acquire power to exercise it in society.  But the broad sense of politics is the one all citizens must practice and in which we are all involved

“It is the politics of citizenship, of rights, of the search for the common good, of respect for human rights,” he added.  “It is the politics that has to do with the other person’s freedom and with exercising my freedom with love, in other words politics understood as a principle that guides the coexistence of a social group.”

Monsignor Silvio Jose Baez was born in Masaya on April 24, 1958.  He studied at Masaya’s Salesian High School then at the Central American University (UCA), but he didn’t graduate from there as before reaching that point he decided to switch to the seminary of the Order of Carmelites.

He has both a bachelor’s degree and a doctoral degree in “Sacred Writings.”

“The doctorate assumes one is capable of offering a new contribution to science in that field,” he said. It is a very complex specialization, above all because it has to with texts written over many centuries in two or three ancient languages with varied historical contexts and diverse literary genera.”

How many languages have you mastered?

“Several,” he answered with a laugh.  “I don’t like to say because it gives the impression that one feels important.  I even had to study ancient languages, such as biblical Greek, biblical Hebrew and biblical Aramaic in which a few books are written, and also various modern languages.”

They have called you Nicaragua’s king of Twitter.  How have the social networks, your life and your pastoral work changed?

“For me, Twitter isn’t an evangelizing instrument; it isn’t a medium for reaching people, or to learn things or make my ideas known.  For me, Twitter is part of reality.  I don’t consider it a virtual reality, but rather an extension of the real world.  For me, people exist in the social networks, which is now part of reality, who have extended out toward the virtual aspect of those networks.  As there are people in the social networks, and there are questions, pain, suffering and hope, I as a pastor, want to be where these people are, just as I am in the parishes, when I visit communities, as I attend to people.  So I dedicate a lot of time to the social networks, especially Twitter, because there are human beings there.”

What figure from history would you have loved to know?

“Saint Teresa of Jesus, the founder of my religious family, of the Carmelite fathers, because she has enlightened, conducted and enriched my life, not only spiritually but humanly, in an extraordinary way.  I would have been delighted to have a long, extended chat with her about many things.”

“I love classic music, but I also love Nicaraguan music.  As I am from Masaya, I like the marimba a lot, and am an admirer of all the music of Carlos Mejia Godoy and many other Nicaraguan songwriters.  I’m very selective in my music.  In reality, if I listen to music, I listen to classic or Nicaraguan.  As a teenager I learned to play piano, but now I’m out of practice.”

Did you play some sport in your youth?

“I played baseball with the kids from the barrio and with my brothers, with balls made out of socks, hit with your hand.  I was never on a team, but my favorite and almost exclusive sport is baseball.  I try to follow national baseball and the Major Leagues every chance I get, but it’s sometimes very hard to do.”

What is your favorite book besides the Bible?

“I delight in reading the literary classics, and am in love with the works of Sergio Ramírez Mercado and Gioconda Belli as Nicaraguans and with other non-Nicaraguan classic authors such as Gabriel García Márquez.  I’ve read nearly all his works.”

And what’s your favorite Nicaraguan food?

With bread or tortilla?

“With tortilla,” he said with a laugh.