HAVANA TIMES, June 20 – HT continues its interview with Julio Tang, a Cuban of Chinese descent who is currently studying in China and who is a founding member of two socially critical left initiatives in Cuba (the Haydee Santamaria Collective and the Critical Observatory).

HT:  Do China or the Asian models of state/market socialism offer alternatives for the future of Cuba?

Julio Tang: If you’re referring to commercial relations that can help improve the Cuban economy, I can tell you that the more these are deepened the better, though I don’t know how we can benefit from these, given how far behind and underdeveloped we are.

But if you’re referring to the possible ideological or strategic approaches of the Cuban government to the imponderable elements of Asian capitalist economic growth, represented by China and the Asian Tigers (each very much Chinese), I think that would be the worst thing that could happen to our country.

Cuba possesses geographical, political and socio-cultural conditions that are totally different from those in this region.  A posture, whether forced or not, that leans toward the new Asian pole of world capitalism would be a defining collision between emancipatory Cuban praxis and even with traditional socialist concepts (perhaps even romantic ones) existing in our country.  As for the communists and/or Stalinists, I can’t tell since I don’t believe there’s a collision of any type with them, though around here we can indeed glimpse some type movement toward them.

To speak about any type of linking with the process of capitalization and realization of consumerism in these societies and in Cuba’s future implies speaking of a total and indiscriminate devaluing of the labor force, spoiling all the achievements reached by the working classes of the world, corruption at all levels and civil homogenization under the consumerist ideals.

China is experiencing all of these evils along with the undeniable but contradictory benefit of technological development.  These occurrences are common to any type of capitalist society, but China is also adopting ideological positions that are increasingly moving away from the socialist ideal, passing through the most rampant neo-Confucianism.

HT:  What is it that you appreciate most about Chinese culture, keeping in mind your nature as a social researcher?

Julio Tang:  Everything in China is interesting as I get closer to the culture — no longer being able to be completely personal — and as I practice more from the point of view of a researcher.  That’s to say that I’m enjoying what I like most about this culture but always looking for the most favorable approach to analysis.  In this sense the Taoist logic of the parks and architecture, the search for beauty and virtue, walking around and looking at the women or the evolution of the timbre of the voices of people when they talk, these are all are enriching experiences.

As in all cultures there are positive and negative aspects.  Unfortunately the ideas that are held in Cuba on China and its citizens are extremely scanty and stereotyped.  A tacit agreement also exists in Chinese society itself (which for some time has been evidenced by its government) of promoting a positive image of its culture and its civilization for the sake of inserting the country into the twists and turns of global society.  That image is something that is often refuted by people with only stay a short time in this country.

China is more than Confucius, silk, calligraphy, ceramics or exacting reproductions of aspects of western culture.  In fact, those elements are no more than very old cultural representations that are present alongside exquisite and modernized variations.  Today China is also greed, the God money, passive acceptance, rampant consumerism and showcasing postures, among other characteristics.

HT:  Tell us about your experiences as part of the ‘globalized’ Chinese proletariat.

Julio Tang:  Well, the first objective of my stay here is to study.  Everything else has to be secondary.  However, at certain times it’s been necessary to address certain needs, and part-time employment has been a saving grace.  On the other hand, I haven’t had that many experiences, but day-to-day life, observation, conversations and some opportunities end up forming certain new ideas.

In fact, one of those experiences was quite revealing.  I had the chance to verify the intensity, atmosphere and expectations of a group of Chinese laborers working in a complex of warehouses managed for Colombian leaseholders.  I was one of those day laborers for three weeks.  Though I didn’t work at their same level or dedicate myself to their same objectives, I felt and I still feel on their side.  I now know what certain moments are worth in life.  It’s not the sole reality of work in the city of Guangzhou, and definitively not the richest and/or most traumatic, but it in fact made an extraordinary contribution to my experience, different from those that I found in Cuba. 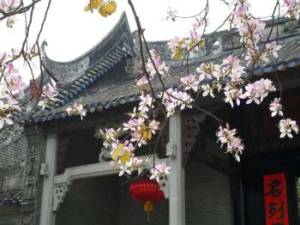 I think that the Chinese proletariat, as well as the salary-earning sector, is too focused on their problems and survival.  This is a situation that the government exploits to a great degree.  Evidently, the traumas of the Cultural Revolution and Tiananmen Square remain insurmountable.  In my view, the promises of money and opportunities “for all” included in the reforms of 1978 and in the 1990s, along with the lethargy and the total attachment of young people to capitalist ideals and anti-solidarity are pushing socialism farther away now than it was in 1949 or 1965.

We only need to look at two pieces of data.  It’s said that in Guangzhou, the third most important economic pole in the country, the period for the construction of one floor in a modern building is three days, the fastest in the country, and requiring maybe around 30 workers.  On the other hand, the minimum wage in this city — the witness to an annual entry and departure of three million individuals (the immense majority coming from poorer provinces) — is about 2,000 yuan a month (a little more than $300 USD).  A rented room the size of no more than 8’ x 10’, with no heat or air conditioning, can end up costing 500 yuan a month.  Only in this way, subjugating the worker in the most feudal manners possible, has it been possible for China to become the second world economic power.

HT:  And your intellectual research?

Julio Tang:  Intellectual research is done through the Internet.  For example, non-Chinese literary works in Guangzhou, the Chinese city where I live, are almost impossible to find.  If it’s not in English, and they’re expensive, I can assure you that you won’t find anything else that’s not in Chinese.  This hinders intellectual development because fast Internet service can go as high as 1,000 yuan a year, paying through a contract.  Logically, my connection to the Internet, though somewhat faster than in Cuba, is what’s available free through the university where I study.  But with that connectivity, the routine practice of paying for books on the Internet is discarded.

On the other hand, I feel that Chinese culture is still very parochial, in the sense in that Marti conceived this term.  The critical acceptance of essential aspects of world cultures is still minimal for the average Chinese citizen.  I even get the sense of a low level of general knowledge of Don Quijote, Edgar Alan Poe, Popol Vuh or Rabindranath Tagore.

In the Guangzhou Central Bookstore, an enormous four-floor building, the areas dedicated to western and universal literature are scarce and small, where those who stop to look in them can only find biographies and general works.  It doesn’t mean that people don’t read; on the contrary, the number of readers is astonishing, but it’s that they’re only interested in certain topics: computer science, Chinese culture, etc.  Parochialism once again.  I was really surprised when I ran into coed here at the university who was familiar with the phrase “I think, therefore I am knew,” by Descartes.  Of course, these are very personal and temporary considerations and can perhaps be attributed to a limited social circle.

HT: Lastly, you’re also a rock fan, and you’ve written about that topic.  What does it mean to you? What are your preferences now? Have you changed as rock fan in China?  Is there rock in China?

Julio Tang: Well, at the moment I consider myself essentially a rock fan.  This means that I’ve learned how to enjoy other musical forms, be it listening to them or dancing to them, this last refers to Latin Americans.  I’m convinced that it has helped me with rock itself.  Music is an essential element in my life.  I can’t study or walk if I’m not listening to music.

My preferences in rock?  There are many… Metallica, Queen, the Beatles, the Sex Pistols, Nirvana, Pearl Jam, SOAD… But with the access to the Internet here, I’ve discovered or deepened in many forms: jazz, the blues, good pop, punk, techno, house, and indie that I’ve found… I’ve gotten a hold of good documentaries on grunge, rock ‘n roll in general, and I’ve just downloaded CDs by both Black Sabbath and Motorhead.  I don’t know where to stop.

The practice of rock in China, under traditional though wide-ranging western concepts, is practically nonexistent.  Recently I found out about a group called “Visual Kei” here in the country.  I had no idea what it was before learning that it is an androgynous aesthetic movement tied to punk, metal and bands as well as electronic music born in Japan at the end of the ‘80s.

This Chinese band, as I’m sure there are others, is condemned to ostracism in a country that is self-defined as very conservative and that — along with McDonalds — there exist the most synthetic pop music and the simplistic tradition in day-to-day life one day after another.  That’s the spirit that I sense as a foreigner in China; I feel an Asian tempo that’s undoubtedly moving but well behind that of other countries in the region.