HAVANA TIMES — Being an independent producer in Cuba means having to negotiate at least three main obstacles: the State’s monopoly over institutional spaces, the ever-present and surreptitious threat of censorship and the general lack of faith in the viability of self-management.

Adolfo Cabrera (Fito), a project coordinator at Garaje 19, and Mirian Real Arcia (Mirita), a producer at Miscelaneo, an independent audiovisual production house – who I had already interviewed once for Havana times – have taken on the difficult challenge of producing concerts on the island independently.

The venue for their first concerts was the locale which lent its name to one of the projects: a garage in Alamar’s Zone 19. Many of us more than welcomed having a gallery and theatre, an alternative cultural space this side of Havana’s tunnel (the umbilical cord that connects us to the rest of the world), in a dormant part of the city that has been stagnating culturally for over two decades.

Our happiness was, however, short-lived. Soon, someone would take it upon themselves to remind the project organizers that this locale was destined to housing cars, not hosting concerts. You just can’t do as you wish with a garage built through your own means in a common residential area, with no property title, see.

Mirita: When we were under fire and everyone turned their backs on us, Xiomara, the director of the Cuban Rap Agency, signed some letters for us, supporting the venue as an alternative cultural project and explaining that the artists who were performing in the locale belonged to the agency. But that didn’t accomplish anything.

HT: How many concerts were you able to hold in the garage?

Mirita: Three: David d’Omni, El Poeta Lírkico (“The Lyrikal Poet”) and Estudiante sin Semilla (“Seedless Student”). After this last concert, they started with that same old story, that we were hosting concerts by people who sang things against the government. We had to hold the last concert, by Maikel Extremo and La Alianza, in the house of David and Ivia, whose project, Omnibus Producciones, is part of the team that organizes our concerts. For us, it is essential for the artist to feel free to sing his or her numbers, no matter what their contents. We do not accept censorship for ourselves, much less for the artists with whom we work, out of respect towards them and towards ourselves.

HT: Who told you, specifically, that you couldn’t organize these concerts anymore?

Mirita: A number of people from the neighborhood first approached us, saying we should be careful with the lyrics of the songs, that we could get ourselves into trouble, a kind of “paternal” gesture, you know. Then Fito got a summons from the police. There, a police major named Pablo told him that garages were for housing cars, not holding concerts, and that, if we continued doing this, they would take legal action against the project and us.

HT: How did you secure your present venue, in the Rio Alemendares complex?

Mirita: We had to knock on a lot of doors. Even at State institutions you come across receptive people. That’s how we ended up there. Generally speaking, the place doesn’t suit our needs, physically and logistically.

Our goal is to promote all kinds of alternative art without excluding anyone, no matter what their political or social ideology. The core of the project is the hip hop genre, but we want to throw in folk music, fusion, jazz, a bit of tasteful raeggeton, like the one Danger, a young singer who is producing. For now, we’re only organizing concerts, but the idea is to enrich the shows with dance and theatre numbers, perhaps something from the visual arts, like body art.

HT: How do you get the word out there?

Mirita: We have an SMS service. We send out about two thousand messages two days before the concert. Before that, we go out to the street to distribute flyers. We announce the concert on the Internet at least a week in advance. Garaje 19 also has a YouTube channel.

HT: How do you manage to produce a concert without institutional support?

Mirita: We have friends who’re always willing to help us, in Cuba and abroad. This is a fact and there’s no reason to keep it a secret. The lights, some of the cameras and audio equipment are ours, and that’s a good starting point for independent projects. Often, depending on the magnitude of the show or the event we are organizing or shooting, we have to rent out equipment. The ultimate goal, of course, is for the artist to be able to take in some money, something everyone wants to do and isn’t a crime.

HT: Do you consider yourself a production company?

Fito: That’s the aim. I could also call it a “business”. I have no problem with this word, though I know it can be taboo here in Cuba. We think of the artist as a kind of businessperson, someone who is moving an idea around and making a living from it, as is their right. We want to do things with as much rigor and professionalism as possible. A number of artists have approached us, of their own will.

We work something like a workshop. We put the artist to work with a poet, for instance, if they need it to clean up their lyrics, and work to improve their promotional strategies. We do premieres, album launches. We hand out copies of the artist’s work at concerts and put together a music video with a song of their choosing, which is later uploaded to the Internet.

HT: My readers would be upset if I didn’t ask you this: What do you get out of all of this?

Fito: The ultimate goal would be for everyone, the artists, the cameraperson, the editor, the producer, for all of us to earn something. It’s not just a question of breaking even. We want to make a profit and that’s what we’re working towards, organizing financially viable shows.

Mirita: We also have a lot of non-profit projects. That is to say, we promote the work of a given artist or project, free of charge. Many people find it difficult to understand what we do, because they’re used to the institutional policy of wearing people down and opening things up only in theory, and when you try and organize something at an alternative space they almost always put obstacles in your way. We don’t do what we do out of pure altruism, it’s not simply for music’s sake. Our aim is to tear down barriers to gain more and more ground, because there’s a need to express ourselves, to show people different kinds of art, without excluding people. 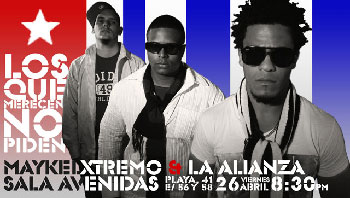 Cuban society is slowly tearing down its barriers. They can continue to say “no” to me, I will keep going anyways, struggling for a “yes.” Los Aldeanos [an anti-establishment rap duo] should be permitted to sing where official bands like Los Van Van and Danden play. So should Charlie Mucha Rima, Albany, why not, they’re also artists and they’re also Cuban. Institutions try and wear you down. What we can’t afford to do is give up.

Fito: Personally, I don’t even believe censorship can do anything anymore. Like Mirita said, you find people willing to stick their necks out for you in State institutions themselves. I think something more complicated is going on right now. We have to make a huge effort to remain positive, to react against the negativity that’s so deeply rooted in Cuban society. People have simply come to believe that they can’t do anything. They don’t even question this belief.

We have to start exercising our freedom within ourselves. If we don’t, our surroundings will not regenerate themselves. I don’t believe any government is an omnipresent, omnipotent establishment. No one has absolute power. People await change as though it can come about externally, but change ultimately depends on us.