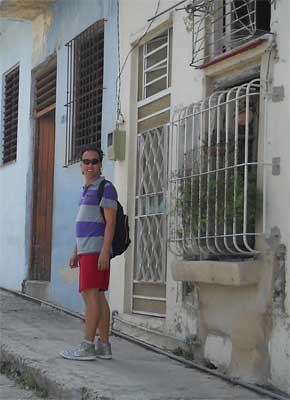 HAVANA TIMES, April 22 — I’ve known Frank since the 80’s, back when we were still teenagers. We lived in the Camilo Cienfuegos complex, located in the East Havana municipality.

In 1995 his parents and brother immigrated to the United States, but he — being of legal age — decided to remain independent and live in Cuba.

After a few years, Frank had the opportunity to travel to Colombia, which he visited for six months and then returned to the island.

Currently he  is waiting to get his visa to go live permanently with his mother in New Jersey.

HT: Colombia is a capitalist country. What can you say about capitalism, which few Cubans here have experienced?

FR: I won’t say it’s perfect, because that would be dishonest. But what I can confirm is that ordinary people live much better there. There, the minimum wage is approximately US $240, in contrast to Cuba, where it’s about 10 CUCs (about US $11) per month.

While I was there, on the news they showed a couple of Cuban doctors from Cienfuegos who had decided to stay. In front of the cameras they said they only earned $30 a month take home pay. Everyone was stunned. Here in Cuba we live below the poverty line, people earn less than 50 cents a day, something amazing.

You can’t even talk about hunger in Colombia. When I was there I was eating all the time without any problem. Food is cheap and you don’t have to worry about what you’re going to eat today or tomorrow. Here people live stressed out over the problem of food, almost everyone in Cuba lives wonders what they can come up with every day for lunch and a decent dinner.

In fact, many people skip breakfast or lunch, that’s something that doesn’t happen in Colombia. I want to tell you that despite the violence there, I saw that people are happy there. They breathe happiness there…I don’t know how to explain it.

HT: If you liked Colombia so much and you’re not in favor of Cuba’s socialist system, why didn’t you stay or go to Mexico, like many Cubans do?

FR: That’s a hard one. There are things that one has to think through very carefully. Plus, nobody wants to be responsible for anybody else. If I would have stayed in Colombia, I would have been a burden because I had gone on a visit. I was invited by a relative of my sister-in-law. And to get to Mexico I would have to cross seven borders, counting the United States. Along the route, they might think you have money and kill you or confuse you with a Puerto Rican, since we have very similar accents.

HT: Can you tell me what the Cuban Revolution means for you today?

FR: The Cuban Revolution? It’s undoubtedly is a farce. It’s not a revolution, and much less Cuban.

As Mr. Fidel Castro says, “Revolution is to change everything that must be changed.” I think the first thing to change is all of them, who are a Mafioso group of soldiers and ministers. They’re nothing but a dynasty, a copy of the North Koreans. At this point I don’t think they’re very interested in the people. They’re more concerned with their interests and lifestyles. That’s why they don’t want to leave power.

HT: What will you do once you’re in the US?

FR: First of all I’ll work hard so that I can have the essentials to allow me to live comfortably, and have a bit more than in Cuba – especially freedom. That is crucial, not having anyone tell me what I have to or can’t do. Like my mother once told me: Cuba is the country of prohibitions. Actually I’m tired of this, that’s why I’m leaving. I know that I’ll have to start from scratch. I just hope it’s worth it.
—–
The day after this interview, Frank was told that he could go and pick up his visa. Now he’s trying to come up with the money he needs to buy a plane ticket and join his family. He 70-year-old mother lives on what the US government gives her.

His brother has a family to support and is unable to help, but apparently he keeps up on what’s happening with Frank. His father is retired and, from what my friend has told me, is in no condition to help out. He’s even made the decision to return to Cuba and stay here permanently.

All this makes me wonder if it’s a good idea for Frank to go to the United States?

That’s something that I guess we’ll find out someday.

2 thoughts on “Frank Is Leaving Cuba”