“This comes from a criminal mind,” she warns

A man dressed in camouflage, with a live rooster on the dashboard, positioned himself in front of her house for hours. Harassment occurs three weeks after the premiere of “Exiliada” (Exiled)

HAVANA TIMES – Zoilamerica Ortega Murillo looked out of the window on the morning of this September 30, and saw something disturbing outside her home in San Jose, Costa Rica: an old Suzuki jeep with two Nicaraguan flags was blocking the parking area. Inside the car was an older man wearing military camouflage clothing.

It was half an hour before Zoilamerica would usually leave to take her 14 year-old son to school. When she looked out of the window and looked closer at the Suzuki, she saw something that baffled and terrified her completely. On the dashboard of the car was a white and red rooster. The rooster fluttered over the glove compartment…

“A live rooster,” describes Zoilamerica in shock. Immediately, the chorus of the song rang in her mind: “This is Daniel, Daniel Ortega, the bladed fighting cock…”! The refrain of the song that Commander Ortega used in the 1990 election campaign, eight years before Zoilamerica publicly denounced him for nearly two decades of sexual abuse and harassment.

Zoilamerica decided to send her son in an Uber to school and not on foot as they usually do. She stayed locked at home. The Suzuki and the rooster stayed more than an hour in front of the house. Until a neighbor of Zoilamerica complained that the man was badly parked and blocking the residential parking lot.

According to the story offered by Zoilamerica to Confidencial, the guy reluctantly replied to her neighbor and stayed parked a while longer. The jeep was in a key position, since from the window and the house of Zoilamerica it could be seen very well.

This episode denounced by Zoilamerica occurs less than three weeks after the documentary “Exiliada” was released. In the film directed by filmmaker Leonor Zuniga, Zoilamerica recounts her life as a survivor of sexual abuse, and details the complicity of her mother, Vice President Rosario Murillo, with Commander Ortega.

In this extensive interview with Confidencial, Zoilamerica narrates the episode lived the morning of this September 30. But she also assures that since she went into exile in Costa Rica in 2013 –due to the same persecution by the Government of her mother and her stepfather in Nicaragua—she has always felt “spied on.”

Zoilamerica does not hesitate to hold the presidential couple responsible for this harassment that she calls “sinister” by involving the symbolism of a rooster. But what alarms her most is that the operation was carried out at a time that involves her youngest son.

“I have always said that the finesse with which these things are planned responds, unfortunately, to a criminal mind. It is a criminal to intimidate my son, who in this case is her own grandson. “She sent them.” That was my son’s phrase (after the incident),” assures Zoilamerica. 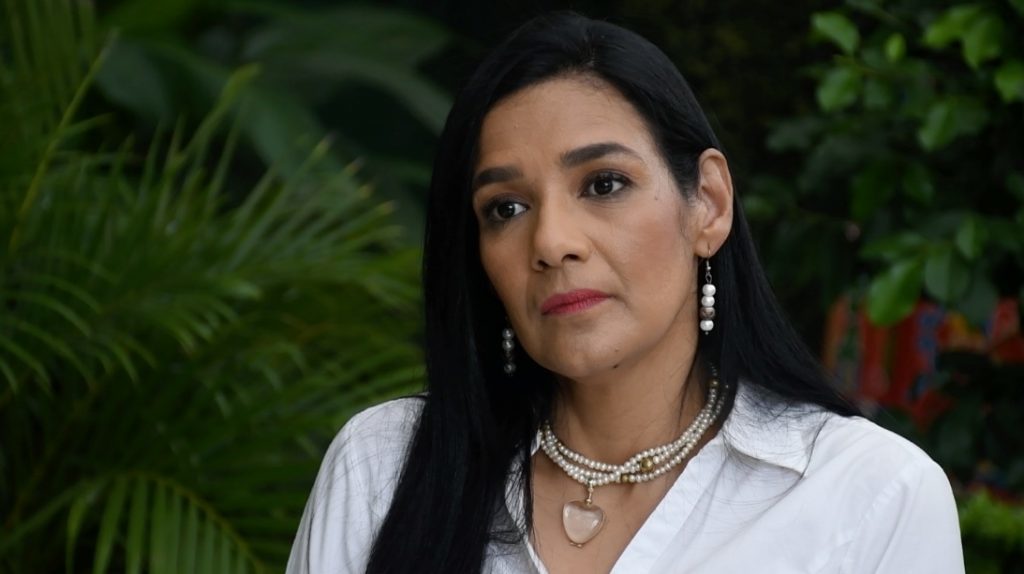 Zoilamerica, what did exactly happen on Monday?

I follow a routine in the morning: take my son to school. I go on foot. That is very early. But this Monday, half an hour before the usual time, a vehicle with blue and white flags was parked in front of my house. With the passenger seat window half-opened. The way in which the vehicle was parked was disregarding road regulations, because in that place there is a parking lot, and the car blocked it to place itself in a way that it could be visible from the balcony and the windows of the house. It was in front of the door.

It seemed odd to me especially because in my house was a guest who came from Nicaragua. She slept in the house that night and, obviously, it was much more obvious to the lady what was going on. In Costa Rica there are no cars with Nicaraguan flags. When half an hour passed and the vehicle did not go away, I opted for my son to go to school by Uber. I stayed watching. When he saw my son leave, the guy in the car took his cellphone and seemed to be making a call. Since I did not go out at the set time, and what I did was to stay inside the house, the car stayed for 30 more minutes and left. What happened?

A neighbor approached to tell him he was parked incorrectly. That if he was looking for someone…and the person replied that he was fine there. That he was going to stay there. He had a Nicaraguan accent and wore a camouflage shirt. He was an older person. And from the balcony you could see on the glove compartment of the car that he had a live rooster.

Is it the first time that something like this happens to you?

Such a thing, yes the first time.

But, have you ever been harassed in Costa Rica?

Not that way, because what has happened frequently is that when there are people that visit my house, a car is placed in the corner and remains there. It is a car that is not from any of the neighbors’ houses. On one occasion I had two French students in the house, and they were intercepted by that vehicle to ask them about me.

The issue is that the message is not only for me, but for the people that get close to me. Since I have been in Costa Rica, this has always been evident to me—and it is also something that is under investigation—that from the Nicaraguan Embassy devices have been established to keep informed of all the activities that I do. Even from the embassy they do intimidation work. And that occurred before the April 2018 crisis happened.

So, you feel spied on in exile?

Completely. In an international agency there is documentation in this regard. Many people who come to Costa Rica are told that they should not meet with me. The Nicaraguan Embassy once had journalists to inquire about my meetings or people with whom I associate with. Some of these people have been questioned about aspects of my personal life. The fundamental intent has to do that we as Nicaraguans establish alliances that give credibility to current history as well as to my personal story. The second element is isolation. That is a determining factor.

What kind of journalists do you mean? Nicaraguans? Costa Rican?

Groups of journalists are used to get information. They are Nicaraguan and Costa Rican who need embassy favors, because migratory favors are sold at the embassy. At another level, and that should not be forgotten, is the number of people who have investments here and in Nicaragua. My employment opportunities were blocked for a long time, because they intimidated the people who employed me by telling them that this could imply risks for future investments in Nicaragua. Everything is documented.

I have to be diligent and say that investors also include NGOs. There are international organizations that are based here and in Nicaragua, and so they are intimidated or are forced to act clandestinely. I had organizations that have asked me to omit my name in activities because of the costs they may have in Nicaragua. In the end, it is a process that has remained undercover in Costa Rica: control, espionage and intimidation to people who link with me.

This that you report, the guy with the rooster, occurs a few weeks after the documentary “Exiliada” premiered in San Jose. Do you think it was a reaction to that?

It is that the documentary gives visibility to the crimes committed by Daniel Ortega and the complicity of my mother. Everything that implies visibility of the accounts Daniel Ortega has to settle with justice, plus now that the crimes against humanity are added, leads to the presentation of this type of thing. We are talking about the appearance of the documentary “Exiliada,” which currently has a world tour and discloses a reality in Nicaragua.

There is also the fact that I am linked to people in exile, because now it is not just me, we are many [Nicaraguans here in Costa Rica]. We must be clear that, even the divisions that generate among us in exile are very directed and motivated by suspicions sown by external people, who want to see us as victims without capacity for action or adversaries among ourselves.

What you went through this September 30 is not a conventional harassment…it carries a more subliminal message. There is a rooster and in Nicaragua we all know what it means. How do you interpret the message they were sending?

Remember that the rooster is a symbol of patriarchy, of the masculinity represented by the man who always wins; that always prevails…and that the song of the Bladed Fighting Cock implied at the time a banner of victory. At this stage they want to undo a Daniel Ortega in a clear collapse of his political leadership for all the things we already know. But, even more so because of the collapse after committing crimes against humanity. They want to reclaim him as the rooster that always wins.

Effectively. On the part of masculinity, it is to claim that sexual abuse is an act that a man commits with a right, and it is the same right that man today has to govern Nicaragua despite anything. Why would I have to accept that this man is a rooster as a person and as a leader, if Nicaragua already recognizes that these symbols of power do not exist?

It’s impressive how they put a signature on everything. They are like mafias that leave a symbol for their hand to be recognized. This of the rooster is a sinister symbol. They want to tell me: ‘accept that whoever abused you is still the rooster…accept that he who stained your life is going to continue doing it.’

Do the Costa Rican authorities know of this episode?

Yes, they are aware and are investigating. It is important that Costa Rican authorities take into consideration what Nicaraguans experience. We mustn’t also convert exile into a clandestine space. Nicaraguans who are in Costa Rica at least have the right to feel safe.

One last question: this is not normal harassment. It seems something with a quite perverse concept; to send a very clear message. Whose idea do you think it is?

I have always said that the finesse with which these things are planned responds, unfortunately, to a criminal mind. It is criminal to intimidate my son, who in this case is her own grandson. It didn’t fool him though because he told me: “She sent them.” That was my son’s phrase. Only a criminal mind involves such an incident with the routine schedule of a 14-year-old child to go to school.

On the other hand, it involves a symbol of this type, the rooster…I feel that I must hold Daniel Ortega and Rosario Murillo accountable. Just as they are responsible for everything that happens in Nicaragua: to orchestrate mechanisms of psychological and physical violence, woven with this level of cruelty and criminal mind. It is impressive that they feel free to use Costa Rican territory to attack Nicaraguans. In that sense, Costa Rican authorities have acted responsibly and will continue to do so.