HAVANA TIMES – “I can’t sit still in the face of injustice. If I don’t do something when I see something is wrong, and nearly everything is wrong in Cuba, then I get depressed, I explode. I’m an artist, this hybrid between art and reality, and seeing people support me is my salvation.”

We spoke to Luis Manuel Otero Alcantara, a young performance artist from Havana, who hasn’t even published biographical information on his Facebook page. Refusing to be called a leader, we can call him the center of the San Isidro Movement, a permanent protest by artists and supporters of free speech that managed to stop Decree-Law 349 from coming into effect, which was a way for the government to censor art and artists.

You’d have to ask for his biography from a file at Cuba’s Ministry of Interior, which features 22 arrests in the past year alone, the last of which resulted in 12 days in prison. Released without any explanation, just like he was arrested, LuisMa (as he is known by friends) agreed to talk to us about this and other experiences from his short life: 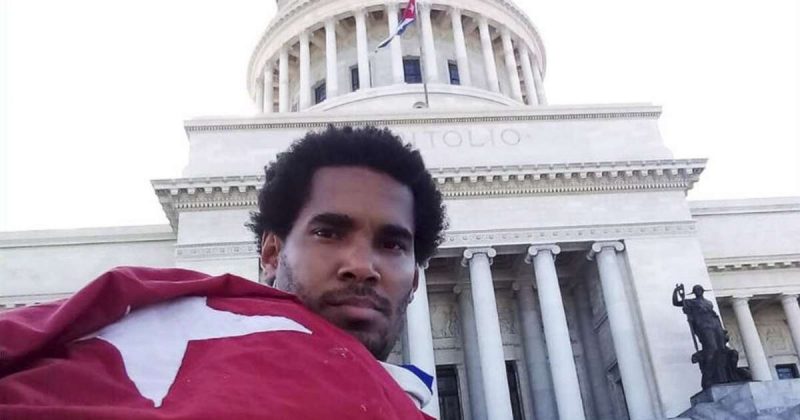 “This time it was like saying don’t do anything crazy because we can make you disappear. It was to teach me a lesson. They also test boundaries a lot, they were trying to feel out people’s support and put it to the test, and that’s where they lost the battle because I had a lot of support, a great deal of support. I believe it was a test and it backfired.”

Locked up on March 1st, he was charged with “Indecent assault of a patriotic symbol” and “Property damage”, with the District Attorney asking to sentence him to 2-5 years in prison. In just a week, a petition on avaaz.org collected over 3000 signatures asking for his immediate release. The number of signatures wasn’t unprecedented, but the chorus of artists and celebrities, even those with ties to the regime, who came out to denounce the situation, was.

Alexis Leyva, KCHO, with personal ties to the late Fidel Castro, exclaimed: “Stop this now! We don’t need it and the future of Cuba isn’t censorship, it’s freedom!” Silvio Rodriguez, a poet and musician of new Cuban society, wrote on his personal blog: “We are giving a very sad impression of backwardness, of being medieval. How are we going to stick ideological shackles on young artists in the 21st century?”

Life in Cuba is lived on the street, escaping the tropical weariness in places that are free from discrimination of hard currency that dominates everyday life. That is where our interviewee finds his stage and audience, while the police continue to interfere in his contact with people. Why? The answer to that question lies in his unstoppable series of actions that are increasingly provocative. Two years ago, he dragged himself along the road, pulling a rock, heading for the San Lazaro sanctuary on the outskirts of Havana. He carried a poem asking the saint to save the Cuban people, but State Security stopped him from reaching his destination.

“Sacrifice is a super important theme in my work, freedom in Cuba will be achieved via sacrifice, and there is also the subject of how we artists need to be dragged along with the people. I asked San Lazaro as a young man who has made sacrifices for Cuban culture, invoking this spirituality we need because we have lost a bit of faith.”

The following spectacles were centered around the Cuban flag, he walked for weeks with the national emblem on his back, walking through parks and along avenues. He wasn’t violating any law as such, but there were always handcuffs, patrol cars and prison bars.

“I was living on the edge last year. Whenever I saw a patrol car, I wondered whether it would take me or not take me, and the other thing is that you know the work you’re doing will lead to this, so you assume repression as a part of the budget for your work.”

While images of LuisMa flooded social media, his mature personality, which is supported on the one hand, is also accused of being a fake artist/mercenary, on the other.

Where did so much strength come from?

“I have blind faith in Cuba being free one day. I’m risking my life, and the only way you can do this is by having blind faith. I have my intuition and faith that Cuba will be free and that we see this day, not just me, but my mother’s generation, my grandmother’s generation, and that my children will be able to enjoy this free Cuba.”

After six decades of Communist totalitarianism, such statements leave you a little speechless, even those who sympathize more with his personal bravery than his chances of really bringing down Castrismo. However, the young man from San Isidro has matured in the heat of his own battle:

Luis Manuel doesn’t know the meaning of rest, just the severity of the Coronavirus outbreak which has postponed his latest artistic work, which was to auction a Cuban flag and then donate the money to the Cuban State. This unusual act sparked a heated debate on social media, the only channel where the mask imposed by the State on free expression doesn’t make any sense.

Our conversation ends with his thoughts:

“I have a flag, an object, out of the thousands of flags the State sells to tourists in dollars. In fact, the State has already taken two flags off of me, this was the third one that I ended the performance with. The question is, if you see a flag burning and you see your child next to you who is dying, would you prefer to save the flag or your child? You’d save your child, of course. Nothing is above human life. I’m also speaking about artists. How can you lock a human being up over a flag? I’m against the State putting the symbol above a human life.”