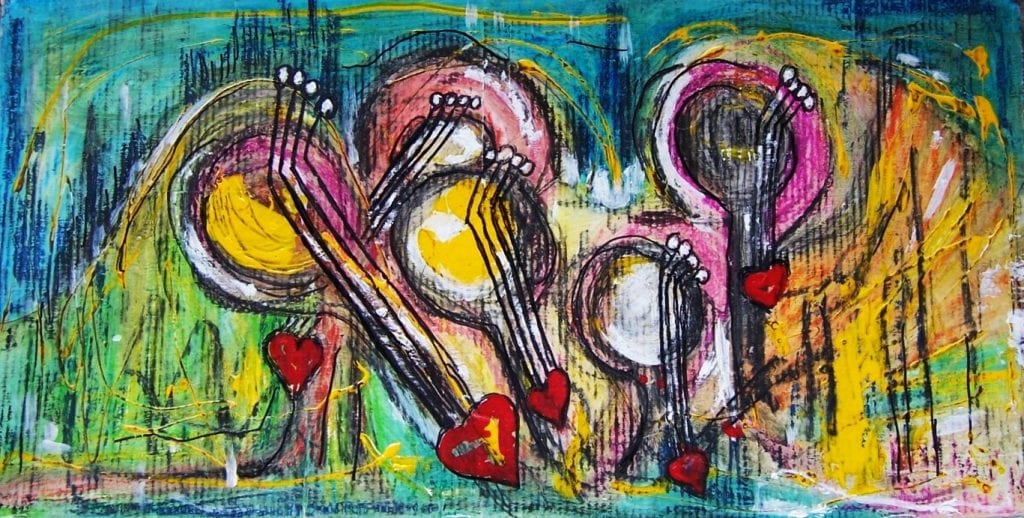 HAVANA TIMES — Ileana Gutierrez was born in Bogota, Colombia, but she believes that she could have been born in Cuba, like her father.

She began studying a Law degree which she then left in her third year. She graduated in Psychopedagogy and later as an Interior Designer. She has been her own manager and has developed her own concept of art which she personifies and defends with the name Sentimentismo.

Even though she has lived in France and exhibited her work in places like Brest to Le Mont St.Michel, and Paris, in Colombia, Italy, the United States… by some strange cosmic design, she ended up settling in Cuba, the land of her ancestors, where love has moored her.

Ileana the Painter moves with the force of a torrent and irradiates the joy of a little girl. She confesses that she has always been “different” and challenging implacable society hasn’t been the greatest challenge in her life.

She paints, she cooks, she lives with contagious and authentic freedom. With an unstoppable flair for improvising.

She isn’t afraid of being labeled an “idealist” or “madwoman” for believing that you can clean up and transform the dump that humankind has converted the world into with Art.

HT: How did you develop your concept of Sentimentismo? Why did you give it this name?

Ileana Gutierrez: It was conceived as a way to conceptualize my work as an artist. To the almost obligatory question: “What is your style?” That’s where the problem began… How do I answer if I didn’t place myself within a known style. I was born out of Impressionism and my father in painting is Van Gogh. But, as my art evolved and developed, I didn’t fit into any already established movement. I began to ask myself, what am I? Where do I fit in? That’s how Sentimentismo was born, so as to explain a style that represents me and that I identify with, in a truly authentic way.

Over time, having studied and worked for the poorest communities, Sentimentismo takes on a broader scope. Now, it’s a conceptual philosophy where Art is an important tool in reeducating. “Sentimentalism” was responsible for mocking human feelings and emotions but with Sentimentismo, I wanted to rescue the value of these emotions. Feelings and emotions are the real driving force behind human will. 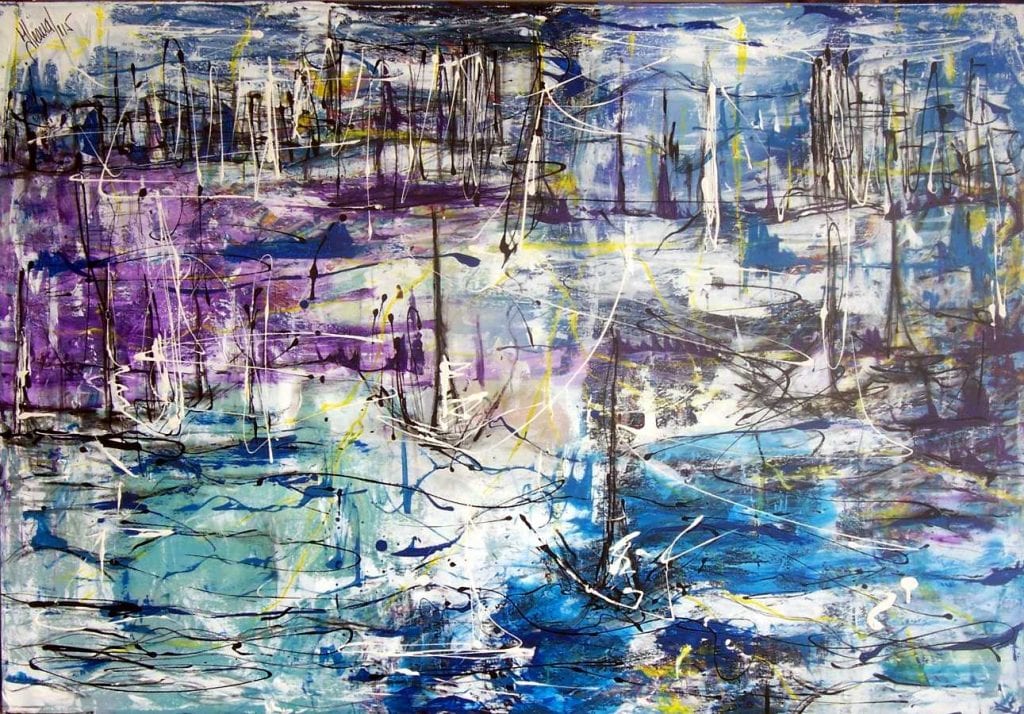 HT: What artists (old or contemporary) would fall within this definition?

IG: Aristotles, Kandinsky, Picasso, Einstein, Henry Bergson and the Colombian sociologist Orlando Fals Borda, to name a few. As you can see, we are all Artists, which is something that I also set out to make people understand: every human being needs to be an artist of their own life and job. If Einstein hadn’t come into contact with the honey of creativity and left the pragmatic world behind to enter the realm of dreams, he wouldn’t have been able to explain the Theory of Relativity.

I have also based it on my studies and research of Hindu, Japanese, Chinese and Vietnamese cultures. And on my readings of Kant, who said that human understanding structures natural laws and reason, the source of moral law. Paramahansa Yogananda says: “The mind controls the body, the spirit controls the mind.”

HT: How has your concept been received by institutions? And in Cuba? How are they willing to help?

IG: On the whole, I’ve had a good response when presenting something that isn’t known and people want to know what it is. It creates the expectation of something seemingly new that falls within the dynamic of innovation and connectivity in modern day progress. And well, that’s where my way of seeing the world comes in, how you can channel and explain a need for change in such a complex, conflict and difference-riddled world.

In Cuba, I have had very satisfying experiences and I have been received by many cultural and educational institutions. I have been in Santiago, Bayamo, Manzanillo, the artistic community in Verraco and Havana. Cuba is helping me in allowing me to spread the word and hold workshops on Sentimentismo.

HT: Are there schools in other countries that are interested in implementing educational programs that stimulate the right side of the brain?

IG: Yes. This has really been implemented ever since the ‘80s, pioneers in this field of developing the right side of the brain’s skills are neuropsychologist Roger W. Sperry and his follower, Betty Edwards, whom I have based my practical workshop within the “Creative Spirituality in Painting with a Sentimentista Focus” project on.

HT: In your workshops, participants reconnect with this spiritual essence that is displaced (or buried) by education, social pressures, the standards of success. But, what happens later? Can you convert passing emotions into a leap in consciousness?

IG: My approach to this process has been pyramid in shape, starting with the heads or leaders of educational processes with my seminars or discussions which are unusual; they aren’t like masterclasses but are interactive and horizontal instead. I am seeking active participation in receiving information and knowlege and, in some way or another, workshop participants take on the essence of Sentimentismo with Art, the universal language that can overcome differences between us and make substantial changes in individuals and therefore also communities as a result.

The first step before starting one of the workshops is to do it with the clear goal of wanting to change, understand and take on this concept individually, expanding the information that enters (using both sides of our brains, which can work together and give birth to an infinite number of combinations). This allows us to process our feelings and emotions from another perspective creating a conscience of “self” to “do” and then “have”.

HT: Can lasting change come about from these workshops in people’s individual visions and attitudes?

IG: Workshops are the practical way of making a theory real. Being able to harness greater control of our skills and emotions. Being able to reach a balance between emotion and reason would be to reach maturity in our behavior.

HT: Do you believe that Art’s social function is to fill a void that philosophy or religion haven’t (seemingly) been able to fill?

IG: Yes, the history of humankind has been transcribed with Art, historic events are only the manifestation of man’s spirituality. As I was telling you, I feel that Art is the only thing that makes man’s spirit sensitive, to overcome differences and make important changes.

HT: Are you not afraid of pigeoning your philosophy in a “-ism”, instead of being inclusive it ends up segregating and excluding those who don’t identify with the term?

IG: First and foremost, I don’t want to be absolutist or impose, limit, nor say that this is the only truth with this concept. I just want to be able to contribute to this world with my experience, be able to say what I already know, which many people already know or have said, but they haven’t given themselves the space or the opportunity to place and reinvent what has already been invented.

Yes, I have faced the prejudice of “-isms”, which have lost repute because of ill use. These challenges make me more consistent, firm and decided to continue my rebellious path. Not only because I am a rebel, but to change the status quo with a new form of “being”. I want to give a flexible tool to every individual so they can make their own formula. And for communities to adapt their own needs today, depending on their own crucial development. Sentimentismo is against the static, it needs to be adapted to movements.

HT: Can artists preach and give an example of kindness? I have known artists and groups of artists with spiritual projects that end up corrupting their ideals and adapting to society’s competitive judgements.

IG: We Artists form part of humanity so kindness, like any other feeling, is a part of our being, just like selfishness, love or hate. It’s true that real artists have a more altruistic mission of transmitting more “human” ideas via the spirit.

We are makers, but like you rightly say, power and control of the masses supposedly for own our benefit can alienate us… That’s why Sentimentismo turns to Art, which will also need to be analyzed as a concept. Because ART is the materialization of human spirituality. You can reeducate people with Art, raising the spirit to its highest precepts without ever bowing down. Art doesn’t only belong to what we call “artists”, it is an essential part of every human being. Every individual has been born with a “gift” and they should make this their art and profession, being consistent with their mission and being happy. If the human spirit is strong and aware, it will forge its “being” as an important foundation for his evolution, knowing that this principle is inalienable.