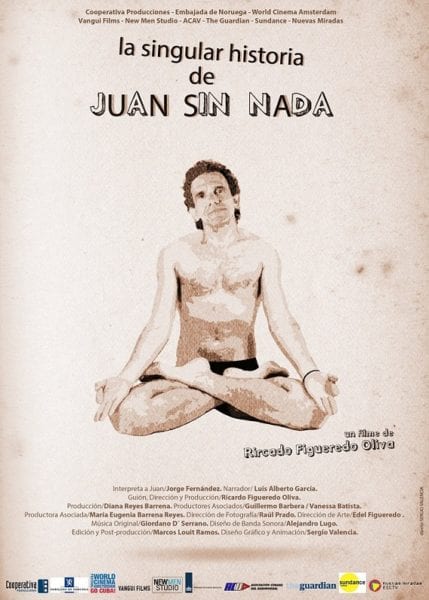 HAVANA TIMES — La singular historia de Juan sin Nada is an independent documentary made in Cuba which appeared two years ago now. Directed by Ricardo Figueredo Oliva and produced by Diana Reyes Barrena, the movie has the audacity to openly and bravely question the raw reality of a Cuban who lives on the edge, with a simple average income that any Cuban living on the island could have.

The movie tells the story of this person in a frank way, there isn’t any poetry, there isn’t any grandeur, metaphors or any other literary device, or in this case, cinematographic device, that embellishes this truth, this reality. In La singular historia de Juan sin Nada, it’s us, the Cuban people, who are the protagonists not only of each individual life, but of Cuban life, of a man, woman, old person, child who wakes up every day and goes out to the street to live their reality.

The movie producer Diana Reyes Barrena talks to us about this and other things relating to the movie’s production and the criticism that it has sparked.

HT: How did the idea for making a documentary come about? What was the inspiration behind it?

Diana Reyes: Years ago, Ricardo, the director, had a script that was called Juan sin Nada, this captivated me from the very beginning and I insisted that he make this movie. In 2014, we decided to look for ways to fund it, as we knew that we weren’t going to find any grants down the official route to film it.

HT: What was the production/filming process like, bearing in mind that it was a completely independent venture, without help from any film institution in Cuba?

DR: It’s an independent movie, which was made in collaboration with the Cuban Audiovisual Association (ACAV) so as to get filming permits. We managed to get film permits on time and without any problems. In Cuba, you can film independently without the ICAIC’s (Cuban Institute of Cinematographic Art and Industry) permission, so filming was quite easy, we didn’t have time restraints, it was all regular paperwork.

HT: Was the final product that lots of people have already seen what you orginally had in mind, or did you have another idea?

DR: Well, in the beginning the project was more fiction than documentary, Juan was a fictional figure with quite an extreme reality, but it also has a lot to do with the people we used to see every day. That’s why the interviews set a pace for the realities that this character experiences, which define the thesis of the end documentary really well.

HT: How do you think the public received the documentary? Why?

DR: I don’t think, I know that the public has identified with the film, some have cried, others have got angry, in short, all of the feelings that invade us when we identify with a reality. Some people think it’s more of the same old. The truth is that it has been very satisfying to know that people on the street, or friends of friends, like the movie and are thankful to have watched it, it’s also very satisfying when people abroad tell you that it has helped them a great deal in being able to understand how Cuba works and its economic structure and basic level of consumption. The documentary goes for exposing Cuban reality for what it is, an everyday reality that many of us find ourselves immersed in and don’t know when we’ll be able to get out of it. I believe that the idea for La singular historia de Juan sin Nada is to represent the Cuban people in a film and that’s why the public has enjoyed it. The movie is already two years old and we still get praise for it.

HT: Have you thought about presenting it at some film event nationwide or abroad? Which one?

DR: We have requested to participate in all the film events in Cuba, but none them have accepted us. Our participation in international events has been limited due to the fact that the movie was uploaded to YouTube without permission, that’s why we aren’t able to take part in some festivals, as the movie can already be seen at any time in low resolution. But even so, it already has 5,000 views since March 2017 at that site. The film has taken part in World Cinema Amsterdam in 2016 and in Peru’s LASA Film Festival in 2017.

HT: What platforms have been used for this documentary to reach a greater audience, bearing in mind your response to the previous question?

DR: In Cuba, we were passing it among friends, and these friends were passing it on to others, while anyone can watch it anywhere in the world on YouTube. We continue to distribute it at festivals and at other international events, so we do what we can, from Cuba. In a few days’ time, the movie will be the subject of an interview by the European Canal ARTE with Ricardo Figueredo, so we hope to have more and more people interested.

HT: From what I understand, the documentary has led to, let’s say “consequences” for an interviewee or two, could you tell us something about that?

DR: Yes. There is an interviewee in our documentary who has suffered certain negative consequences for having appeared in the film and giving an account about her private life. For us, it’s more than disgraceful that something like this should happen. We never meant to hurt anyone, although the reality that most Cubans live is quite tough and it’s to be expected that some official wouldn’t like what’s said, but that is no reason to cause a work-related problem. I anxiously await the day when our country allows us to feel free to talk about and denounce anything we believe to be wrong.

HT: There are people who have said that the documentary is “more of the same thing”, do you believe this to be true? If so, why did you continue with the idea of your movie?

DR: I personally do share this idea, but for me as a producer and as a Cuban, it was very important for me to make this film, a film which reflects the truth without any make-up, my truth and the truth of my people. That this movie bears witness to the reality that we can’t see in history books and that we might not see in 50 years, because the Cuban people forget popular stories very easily and we have to tell our historic truth, the one we live. I believe our documentary is a great contribution to contemporary Cuban history.

HT: What other projects do you have in mind? Are they projects that deal with the same subjects as Juan sin Nada?

DR: Cuban reality is a recurring theme in Ricardo’s work and yes, we hope to continue making new films that contribute a little more to understanding everything that goes on around us on this island that has an external and internal blockade.

One thought on ““Juan sin Nada”: Cuban Reality and Nothing Else”