HAVANA TIMES – It’s a hot Thursday in Havana, the kind of day when you can’t find any shade to hide in. I walk with a certain haste. I’m late and the “temporary situation” isn’t exactly at fault. I refuse to arrive fifteen minutes later than the time that’s been agreed.

Here I am, back in Cuba for fifteen days after a whole year away. Two weeks doesn’t leave much free time: there’s seeing family, catching up with friends, getting paperwork sorted at 17 and K streets, doctor appointments… But no. I refuse to leave without meeting her. Marta Maria saved me, and she has to know.

I check my phone to remember what the number is of the building. I go inside and all the apartments look the same from their doors. I start walking up the stairs hoping for a sign, and then suddenly it appears: the only door, up until this point, with a poster in favor of same-sex marriage. “My family is original,” it reads.

I carefully knock and she opens the door, holding Nina in her arms. She’s just like she is in photos, but a little shorter. There she is, with her heart tattooed on her breast and without a bra. She hasn’t slept all night, but she still looks ready to fight.

I first heard about Marta Maria Ramirez (@Martamar77) when I was in the third year of my Social Communications degree at Havana University. Back then, Marta formed part of the campaign “Quiero hacer una pelicula” (QHUP), by independent designer and filmmaker Yimit Ramirez. Her role as the Community Manager made me follow her on social media and that’s where I came across her “Martazos”.

Marta spoke about lots of things: equality, respect, change, but most of all, freedom. It was the immersion into a critical vision of my reality, with no return. While it didn’t give me all of the answers I was looking for, it did make me understand that there were other women out there asking the same questions. I wasn’t alone. Everything seemed to indicate that being a Cuban woman and a feminist weren´t diametric terms. Everything seemed to indicate that being a feminist wasn’t a “bad word”.

Let’s get back to our meeting. Marta opened the door and hugged me as if we had previously met elsewhere. She explained that she almost canceled our meeting because little Nina had had a fever all night long. Her milk teeth were coming in and they were bothering her. Nina has deep blue eyes. She watched me. 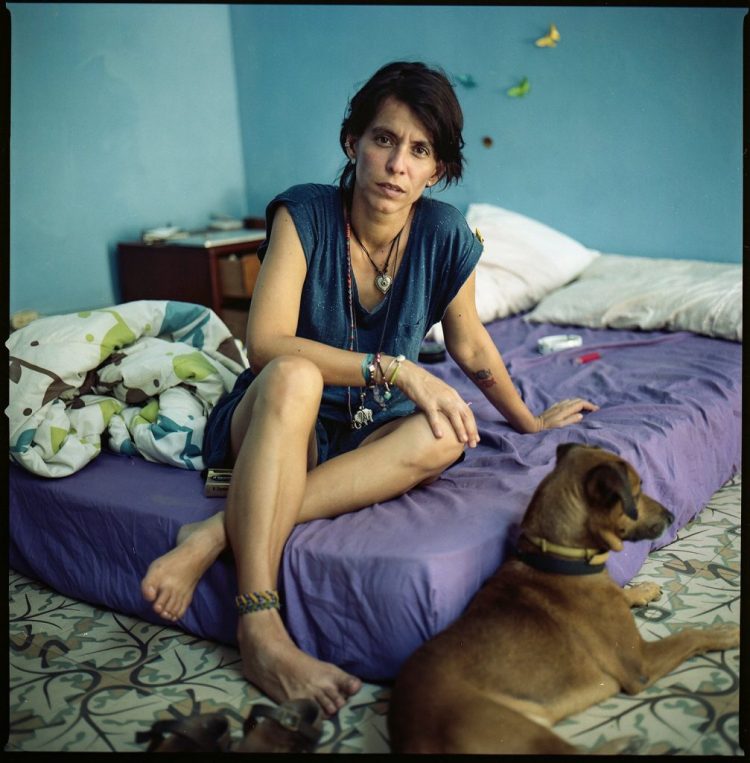 Once we were sitting down on the floor and after some chit-chat, I asked my first question: where is Cuba’s feminist movement at right now?

This isn’t even a “movement”. I wouldn’t talk about “feminism” in the singular either, I prefer to talk about “feminisms” in the world, because there are many variants. However, in Cuba more specifically, it has to do with something else: an organization which demands authorization for all of these alleged minorities and breakaway groups, in broader terms.

In Cuba, words are all confused, which is why we always have to look for euphemisms to call them for what they really are, but anyway, that’s what I mean to say. I don’t believe that we can talk about a feminist movement on the island, right now. Up until now, “bringing women together” has been the only thing that’s been done. At least we are getting to know each other now.

So, what would the next step be? Hold “meetings”? Organize?

It isn’t time to hold congresses or meetings, first we need to have a common agenda. When you form part of a movement or operate within a group, there are some things that not everybody agrees on and you have to reach a consensus. You also end up doing what the majority decides.

I’m not being a pessimist. On the contrary, I believe that it’s something that every movement has gone through, regardless of what it’s for. The thing here though, is that we are 60 years behind, because this was a struggle that was interrupted. We were given rights that apparently resolved the problem, but it was in reality a lot more complex. We needed to keep with the times.

That’s to say, they were great measures at the time – super progressive – and it was really good that Cuban women were incorporated into society as a productive force. Working. But you can’t just leave it there, only written on a piece of paper as a decree. It’s the same thing that happened with the issue of racial discrimination.

Can we say that there are spaces in Cuba where feminists can come together and draw up a common agenda?

There are, but these are faint spaces, and not every feminist has access. I also believe that they are marked by this patriarchal figure of a “leader”. It’s the same old agenda every time, and we’re all fed up of it. So, this also draws away from the appeal of the movement, quite frankly.

Nevertheless, social media has been especially useful for us to get to know one another, to see each other’s faces, and to place certain processes such as complaints. Not believing in the legality of something or believing her and not having received the adequate response, you grab whatever it is you can to vent a little.

Marta, one of the comments I’ve heard the most in recent weeks is that “in times of ‘the temporary situation’, feminism is the least of our worries.” In these new times of crisis, has the feminist agenda been cast to the background?

That’s foolishness. It’s like: “What do we do first?” There are agendas that are cross-cutting issues, and if you want to move towards a more just society, they can’t treat us the way they do, like sexual objects and another thousand other everyday things.

This leans towards an uncritical view of many women, who then don’t have the tools they need to distinguish between psychological, economic and even obstetrical and gynecological violence. So, what are we really talking about?

Many Cuban women don’t even know what their rights are. However, they then fight because they are being mistreated in hospital delivery rooms. But this is a fight that has been going on for a long time. If you are able to recognize the struggle, you can start fighting before and you don’t have to be alone. And you won’t only be making a complaint, you’ll be making a complaint saying: “I stood up to the System and the System failed me.” You’ll help other women going through the same thing too, you’ll be standing with them.

So, no. We can’t talk about a movement here in Cuba. We can’t even talk about a “feminism” in the singular anywhere in the world. And yes, I believe it’s urgent that we do. Not even militancy in feminism, but a more global vision of gender. That would resolve many things from a macropolitical perspective.

Can we say that feminism or “feminisms” are important in times of crisis?

People become radical in times of crisis, and it’s something I’ve been saying for a long time. They become radical because they are scared for their lives, for the lives of their loved ones, for their culture, beliefs, etc. This has always been in the case in the history of humankind.

The thing is though, this radicalization is associated with physical violence, weapons, bombs, attacks… and I would say this isn’t the way. Gandhi became radicalized in India and he did it in his own way. Mandela in South Africa and he did it in his own way. People radicalize because they need to in order to survive, and this radicalization isn’t always violent. As a result, this needs to be the starting point: no preconceptions when it comes to being radical. Being radical is a right.

You can’t be a half-baked feminist. There is a responsibility and I’ve felt this from a young age.

I entered the world of feminism thanks to my father who was a machista (like nearly every man is), but as a good father, he didn’t want us to experience the same things he did. He was also a man who traveled about. So, he had other references of women that he liked better and he wanted me to be more like them. It was my father who first sat down with me and talked to me about feminism when I was seven years old.

I had no idea what it was, but the women he told me about were a lot more appealing that watching my mother with her double burden, having to raise my sister and I… even when she was a great professional, a great doctor. However, that wasn’t what I wanted. I liked these other women my father told me about more. So, that’s when my curiosity began.

There was a time when I distanced myself because there was a lot of preconceptions about it and because I was among a group of feminist women who had an anti-male discourse. That is to say, they didn’t include masculinities and I couldn’t understand why not. I was very young, but I couldn’t understand it. I had a father and friends who weren’t machista on purpose.

Should we be “radical” given our “backwardness and our political, economic and social circumstances?

Of course, it feels like we are lightyears away from what is happening in the rest of the world because we don’t want to get elbow-deep in the issue. It’s like: “Oh! That’s a lot of work! There are so many things that we need to worry about: this “temporary situation, then same-sex marriage, then…”

God and the Communist Party are held responsible for everything that happens here. It’s always a matter of “God or the Party willing.” I would only deal with the Party because I don’t know God. But that’s a very uncritical way of living life. Like: “Shut up already! Why do you argue so much?”

I repeat, the first step is encouraging meetings, mobilization, getting to know each other. Then, in spite of possible differences, drawing up a common agenda to see what really is a priority: whether that’s at a community level or “getting to the heart of it”, as we say.

Would Cuban institutions play a role in this process?

We have to take advantage of institutions, because we won’t have a chance otherwise. This isn’t a country where you can move about on your own. Every time you do, they throw a decree at you.

At that moment, little Nina, who I had watched feed and shared some laughs with over a rubber frog, marks the end of our conversation. Her milk teeth are demanding her mother’s complete attention. I leave, but not without first giving Marta a sisterly hug and telling her that I’ll be back another time, maybe with more questions.