HAVANA TIMES, Feb 27 — Through a friend I got to know Maria de las Mercedes Gonzalez Amade, a young Havana woman who was physically challenged from an early age. Mercedes walks with great difficulty and life is a constant struggle for her to stay on her feet and not flat out on her back. Despite it all she still tries to make the most of things.

HT: Can you tell us about your childhood and how you became ill?

Mercedes Gonzalez Amade: I was born in this same house 36 years ago, a healthy baby girl, but when I was an infant I got a high fever and went into convulsions. My mother was very young and didn’t pick up the signs until I started taking my first hesitant steps and they noticed I had a limp. Then they started investigating, looking for what caused it and after a series of tests I was diagnosed with a mild cerebral lesion that was affecting my locomotion.

As a child and a young girl I was operated on quite often and spent months on end in rehabilitation, but despite it all I made a great effort and graduated as a Food Chemistry Technician in 1993.

The studies didn’t help much because at that time we didn’t have this policy we have now of integrating the handicapped into society. I got a job and started working and it was just fine but a year later they downsized and I was laid off; after that I was never able to get a job doing what I was specialized in.

HT: And did you try? 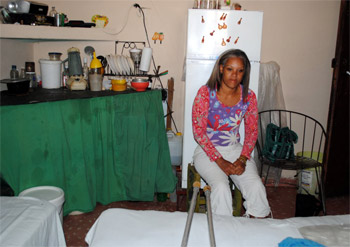 MGA: Yes, yes. Several times friends told me about vacancies in different places; and I’d go there and see them all excited and then they’d see the condition I was in and they’d turn me down.

Then I got pregnant and had my little boy, who is a blessing, but I was in a wheelchair for months.

Since then I have to go to rehab almost every day from early morning till late in the day, trying to postpone the moment I’ll be confined to a wheelchair. I get involved in different things and something always happens, I even set up a street vendor’s stall with money from a friend but because I was seated so long my health suffered and I had to give it up. I was putting my health on the line for money and it just didn’t make sense.

Unable to get work, the State provides me with financial assistance. That means they give me 200 pesos (10 usd) a month which is not enough even to start with. But anyway “I get financial assistance.” With that I have to pay for the appliances, electricity, gas, phone plus all the expense of bringing up a child. Yes, because I’m a single mother, all-in-one mother, mother and father at the same time. I can’t depend on the father even to look after the little boy when I have to go to hospital.

HT: I understand you help physically challenged people in your community.

MGA: I belong to the ACLIFIM (Cuban Association of Physical-Motor Disabled) which is the organization that looks after the disabled and facilitates their integration into society. And they’re doing it really well, really successful.

For the ACLIFIM I look after quite a big area in my municipality (Mariano). My mission is to visit people and even if there’s not much you can do you can at least listen to them and report to your superiors what they need and see what can be done, as well as to give them information to guide them, because they feel trapped and don’t know where to turn for help.

I help with that, as well as with the integration of physically handicapped young persons into sports, or if they want to make something of themselves, arrange some kind of course for them. There’s a school camp for them in Santiago de las Vegas (outside Havana) where they get taught English, handicrafts, traditional medicine … In short, the idea is to try to integrate them a bit better so they don’t feel so helpless and alone and feel the world is against them.

HT: You talk about the ACLIFIM but how does the government help the disabled?

MGA: Well, medical care is free, we pay half fare on public transport and in some cases we get Social Case treatment, like me, but what the state gives us falls far short of our needs. You see these ugly shoes I have on my feet, well, on the street you’ll have to pay US $40 for a pair. Do you think a handicapped or disabled person has $40 to spend on a pair of orthopaedic shoes? And if you leave it to the state to make them, you could spend 4 years waiting in your bare feet.

There are disabled people who have more serious problems; that need catheters and other devices that are unavailable. When the catheters are old they can cause an infection; I have a friend who died that way at the age of 23. In other words, it’s true we have many problems: the blockade and things like that, but there are still people who need help.

Some disabled people have the financial means but most are just very simple folk. So what the state does, excuse me for saying so, is a bit like propaganda.

Mercedes lives with her son in a tiny room in a ruin of a house together with another 15 persons.

HT: Have you taken any concrete steps to get out of here?

MGA: Look, in Marianao there’s over a thousand of us members (of ACLIFIM), and I believe over 60% have housing problems, some very serious.

I’m in a vicious circle because I’ve taken all kinds of action and got no results. I wrote to the Central Committee, to the Plaza of the Revolution local government, to the Party, and the ACLIFIM: nothing.

The Housing Department is supposed to allocate the ACLIFIM two apartments a year but here in Marianao there has been much corruption, and since 2003 they haven’t allocated any. The waiting list may be big but the corruption is even bigger.

Since I’ve been applying for a place to live I’ve been acquainted with 4 directors in Housing; all of them ended up in prison; the last one to get caught was the secretary. They were splitting up the homes for the disabled between them.

HT: You talk of the past. Do you think things will change?

MGA: Well, they’ve appointed a new manager and every time there’s a change you hope it’s someone who is not corrupt.

I’m not asking for a palace, just a place where I can stay with my son because the two of us sleep in this tiny 3 x 4 hovel and when you’re handicapped you need proper living conditions. For example, the hallway of the house is uneven and I stumble all the time. Not long ago I fell and broke my leg which was horrible because the bone wouldn’t mend.

Also due to the cerebral palsy, I suffer from spasticity which means my muscles start to contract gradually from the feet upwards and when it gets to my waist I collapse and even wet myself. It’s because of the humidity and the stress. There’s plenty of that here. 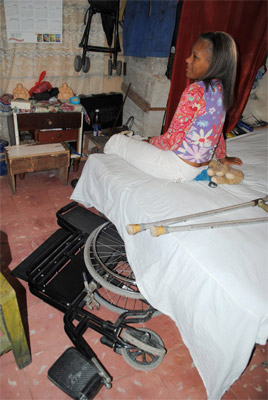 The neurologist said to me: “You can’t get into arguments, you can’t get stressed, you can’t get nervous,” but living together with so many people means there’s always conflicts so I spend 22 hours out of 24 stressed out. All the progress I make in a month of rehabilitation, hours and hours of effort and effort, I can lose in a quarrel or an argument.

Besides, the family influence is affecting my son’s upbringing, like when he sees those cousins of mine coming to blows. Who’s going to tell him not to when it’s his turn.

We’re a dysfunctional core, in other words we live together but everybody does their own thing. And I’m here as if it was a favor, so when things aren’t going to the owners liking they threaten to kick me out.

HT: So what hope do you have?

MGA: Now the state is allocating grants for building houses, but as I was telling you, I can’t do anything because I’m not a home owner and I don’t have the means, I’d first need to get a piece of land. The state has lots but to get one you have to have good contacts.

Near here was one empty lot and even though I applied for it several times they eventually gave it to a girl married to a foreigner, from a family with possibilities, not even from around here, even though the law says residents have priority.

The other option is to buy a piece of land privately but that costs over 5000 pesos (250 usd), and where am I going to get that kind of money?

HT: I see you’re very focused on the issue of housing. Do you have other dreams and aspirations apart from that?

MGA: Well, I’d like to get reintegrated, look for a job. Some friends agreed to teach me how to work with Papier Mache … If I devoted myself to that I could have a workshop in the house and only go out to deliver the stuff.

HT: Mercedes, one final question, if someone reads this interview and would like to help, how can they contact you?

MGA: My telephone number is 265 2095 and I have an email that a friend checks for me: ([email protected] ) so you can contact me that way.

HT: Thanks for confiding in us.

MGA: Thank you for listening.