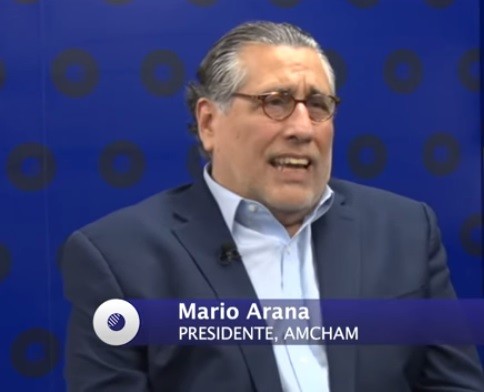 HAVANA TIMES – The re-election of Mario Arana in the presidency of the American Chamber of Commerce of Nicaragua (AmCham), represents a support of this business sector to the work carried out within the Civic Alliance for Justice and Democracy.

“The business sector cannot be outside the process of political transformation” taking place in Nicaragua, noted the economist, during an interview on the program “Esta Noche” (Tonight), which is transmitted online.

AmCham partners have “assumed responsibility” for contributing to the search for a solution to the economic crisis that the country is going through, and that is why their approach echoes within the Alliance, he said.

That is also why the election of six board members —four of whom are repeating— was attended by 197 members, that is, 71% of the total.

In AmCham “everyone knows that a political solution is needed to solve the economic crisis and that the sooner the better for everyone. There will be no economic negotiation without solving the political problem, Arana explained, assuring that there is consensus among businessmen around that approach.

The thinking of businesspeople in the opposition to the Daniel Ortega regime is based on the existence of “a real concern and a high desire to find a solution of the crisis,” although he acknowledges that entrepreneurs have paid a price for actively participating in politics.

“It is clear that, to some extent, in fiscal policies there’s a reality, which is a punishment for the business sector…this is part of a political game in which the pretension is that the business sector be docile, but we are not necessarily willing to do it,” he stressed.

Michael Healy, first Vice President of the Superior Council of Private Enterprise (COSEP) states that “the private sector is doing its part, everything in its power, to achieve this great coalition… and we have lost a lot,” he said in reference to the increase in taxes, the reduction of exemptions and exonerations, higher rates and exaggerated charges that they have had to assume in the last two years.

However, he says that “we are willing to move forward because we know that only by changing this government can we attract national and foreign investment, and create new sources of employment for hundreds of thousands of people who have lost theirs.”

In social networks, citizens are impatiently criticizing a private sector that they sometimes label as indolent and at other times as cowardly, while they place a lot of hope in that a prolonged national strike would put an end to the dictatorship.

“The social networks have a problem: they are not going to overthrow Daniel Ortega,” Healy says emphatically.

The formula to change is that “every Nicaraguan works so that here there are clean, transparent, observed elections that give the people the certainty that their vote will be counted,” he said.

Meanwhile, “we have to organize ourselves territorially, and unify the largest number of sectors: political parties, Blue and White National Unity (UNAB); Civic Alliance, civil society organizations to create a large coalition. This is what we are doing, and the private sector is a fundamental part of all that,” he added.

While trying to structure that opposition coalition, in the international community there is still a great “concern” about the need to start “a process to restore justice and freedom, and obviously build the democracy that we need,” Arana emphasized.

Throughout the crisis, the Government of the United States as well as the European Union and the Organization of American States have threatened to sanction the Ortega regime if it does not contribute to a solution to the political crisis.

Although he recognizes the value of these actions, Arana believes that “external pressure is one more component among many others,” which must be added to get out of the crisis.

The problem is that neither the people, nor the economy can endure waiting until the elections of November 2021, so that the citizens insist on asking —and even demanding— immediate and effective actions.

What can the private sector do if they continue to tax more each day? Every day some company closes. What we are looking for is to defend the jobs of Nicaraguans, but every day more positions are lost, due to the massive amount of taxes that the Government charges us: only the property tax has risen up to 500% in some cases,” Healy said.

His colleague and second Vice President of COSEP, Sergio Maltez, told Confidencial that “the government is aware about this whole situation, because they have the numbers” that show the deterioration of the economy, so he thinks that “political will” is required to find a solution.

The problem is that the regime is not going to show “political will” out of simple generosity, but that it will have to be forced upon them with actions.

“It is already happening that investors are leaving the country. That generates unemployment and that new investment doesn’t come. It is a pressure factor, which can generate a new social upheaval when people can no longer pay for public services, nor the basic consumer products, because they no longer have purchasing power, or they were left without income,” he described.

Maltez clarifies that “nobody here wants a war, but the economic issue can lead to a social upheaval, and it is already happening. The population can start to despair because they don’t get answers to their economic demands, and because employment is disappearing.

Mario Arana believes that one of the ways to get out of the crisis is the structuring of the National Coalition that will dispute power with Ortega in the general elections of 2021; however, he acknowledged “we are in the process of negotiation to structure it among the various forces that will take part.

Arana emphasized that forming a Coalition is a process that requires “rebuilding trust, establishing relations and talking” with different political actors. He explains that in recent weeks there have been contacts between UNAB, the Civic Alliance and political parties, where the main agenda issue has been the electoral reform announced by Ortega’s regime.

“An effort has progressed —perhaps silently— of UNAB, the Civic Alliance and political parties especially around electoral reforms to such a degree that you will see…this week, I believe, an approach where the political parties, the Alliance and the UNAB are going to publicly express themselves jointly on this issue,” Arana announced.

Therefore, he urged civil society to organize “the best they can, to build their bases, their communication links” and highlighted the work done by the Peasant Movement. “What is important is that organizing has to be done because eventually all these forces are going to join together in the Coalition,” he said.