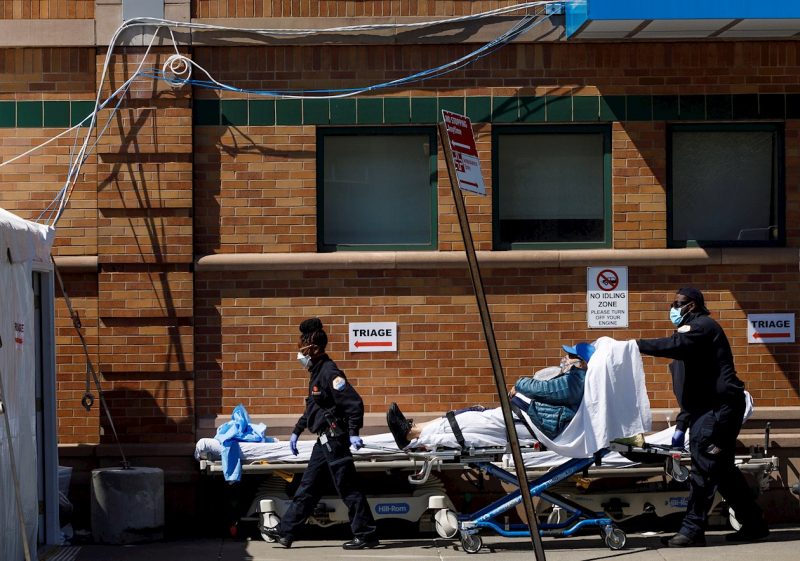 Sonia Acevedo, a family practice doctor in Davis, California. “There’s no time to wait and see if the government wants to adopt preventive measures or not.”

HAVANA TIMES – With more than 432,000 positive cases and over 14,700 deaths, the United States has become the principle focus of the Coronavirus pandemic that was first detected in the Wuhan province of China in December of 2019. The disease has now sickened over 1 million 500 thousand people, leaving 88,000 dead all over the world.

In the United States, Covid-19 was thought to be an “imported” virus until, on February 26, when the first case of “community contagion” was diagnosed at the hospital affiliated with the University of California – Davis in northern California.

The finding was registered in a scientific article titled “A case of community transmission of the syndrome of severe respiratory affliction due to SARS CoV2 in the United States.” This article, written with the participation of ten doctors from the medical school faculty at UC Davis, was published in the specialized journal “Clinical Infectious Diseases”.

Nicaraguan Family Practice MD Sonia Acevedo Espinoza participated in an interview over Skype for the weekly internet news program Esta Semana. In this interview, she explained how this case changed the protocols that had existed up until that moment in the United States for detecting the Coronavirus and testing patients suspected of having the virus.

“In January, when we began to hear about Covid-19 in China, we didn’t know a lot about the virus. Patients came in and we made the mistake of telling them not to worry, that the most important thing was preventing the normal flu, which from October 2019 through March of this year has killed some 63,000 people in the US,” Dr. Acevedo recalls.

As the days went by, the doctors understood that Covid-19 deserved more attention than the flu. The first finding that brought them to this conclusion was knowing the mortality rate of this virus; according to Dr. Acevedo, it’s ten times greater than the normal flu. “We asked ourselves: ‘What are we going to do with a virus for which there’s no vaccine or medication, and that’s ten times more fatal than influenza?’  We ourselves were frightened,” confided the 41-year-old doctor, originally from Managua.

In this interview, in addition to talking about her experience in Family Medicine in the prevention of Coronavirus in Davis, California, Acevedo also refers to the challenges that Nicaragua faces in preventing the illness, given the lack of action and leadership of the public sector. “The message that I want to leave clear is that this isn’t a cold or a flu; this is very serious, and it’s going to need everybody’s support and help. There isn’t time to wait to see if the Government wants to adopt isolation measures or not,” counsels Dr. Acevedo.

What protocol was used in California for those suspected of possibly having the Coronavirus? Were you able to examine them, or was it only considered to be an “imported” virus?

That was one of the greatest frustrations at the level of primary attention in the outpatient clinics. I had a number of patients coming in with high fevers, who had all the symptoms. We tested them for the flu and they were negative. Everything else also came back negative. Unfortunately, the protocols at the moment were that if you hadn’t traveled to China or to countries where there were cases [of the novel Coronavirus] we couldn’t test them for Covid-19, so the patients returned to their communities, we couldn’t do prevention by registering their contacts, nor could we put them into quarantine. There were several like that.

The first case in the country that could be diagnosed as one of community contagion occurred in the hospital [in Davis, on February 26] and we had to fight for the right to do that test. The patient was relatively young, with no other chronic illnesses or risk factors. She arrived at the hospital and had to be intubated for respiratory failure. They gave her antibiotics and there was no improvement. They tested her for everything and everything came out negative, and they then had to fight so that [the U.S. Center for Disease Control] Atlanta would let the doctors do the test. When at last it could be done, it was confirmed that the patient had Covid-19.

After this case, what decision did the health authorities in the United States make?

This changed all the protocols in the United States, because we then knew that the virus was in the community. This patient hadn’t had any contact with anyone who had traveled. So then we knew that we had to change the way in which we were thinking about the virus. We could no longer speak of containing it. We changed over to the mitigation phase. However, the problem we still have is with the tests. Up until this moment, we don’t have the equipment to do them, so, although there’s no longer a requirement that you have to have traveled, we still can’t test all the patients that we believe have the virus.

How many tests on average does a laboratory at a California hospital conduct?

We’re applying them to patients who are sick enough to be hospitalized, or who are at high risk, because we don’t have the material to give them to everybody. A laboratory is handling some 160 tests. It’s very difficult for people to understand that adequate personnel are needed to do the tests. The state of California reported that they’ve done 92,500 tests, but we still don’t have the results for 59,500 of these, so we can’t continue sending more tests to the laboratory because of that delay.

The data from the state of California registers more than 15,000 positive cases and 350 deaths. You said that more than 90,000 tests were conducted, but there are many left to analyze. Is California better prepared than other state governments in the US?

I think so. Our governor made an excellent decision on March 19 to order the closure of everything that isn’t essential, so they closed all the schools, recreation centers, beauty parlors, even Disneyland closed here. The only things open are the supermarkets, medical clinics and hospitals. There are some restaurants open, but only for takeout.

When do they expect the pandemic to peak in California and what are the projections?

April 26 is expected to be the peak of the pandemic. According to the projections, we’re going to have enough beds in intensive care. All the plans are being made to use different buildings as alternative hospitals. A US Navy hospital ship has already docked in Los Angeles. We’re still battling a little, because we don’t know if we’ll have enough respirators, but yes, we’re better off than many states. For example, in New York, the numbers are frightening and conditions are very serious.

In Nicaragua there’s fear and uncertainty among the doctors and health personnel in the hospitals, because appropriate protective measures don’t exist. In your case and that of your colleagues, what kind of measures did they adopt to protect your health and that of other medical personnel?

The lack of protective equipment is something we’re all suffering with. There aren’t enough masks, there aren’t enough robes. One thing we’re doing is that we’ve minimized physical contact with the patients. For example, almost all our initial visits are done over video, we’re not seeing the majority in person. If the patient needs to be tested, there’s coordination so that they all come at the same time, they get the test done in their car and that way we also minimize the number of masks that must be used, because there’s a lot of fear that we’ll be left without masks before the date when the number of cases is expected to hit a peak.

Do medical personnel go to people’s homes to look for those who may have been infected?

Absolutely not, we don’t want to have physical contact, it must be the least possible. We’ve changed the way we practice medicine. Nearly 100% of all the out patient consultations are by telephone or video call.

In Nicaragua the authorities have had an attitude of great negligence about the Coronavirus, to the point where the National Assembly president Gustavo Porras, who is also a doctor, says that there’s no reason to become alarmed about some “sporadic cases” of Covid-19. Instead, it’s been the families, the organizations of civil society, the churches, and the business organizations who’ve led the preventive actions. What would you say to your colleagues in Nicaragua and in the government?

The first thing, is that they have a great advantage. We now have more knowledge about the virus. With the existence of positive cases in Nicaragua, all these isolation measures must be practiced. There’s no time to wait and see if the government wants to adopt these measures or not.

This isn’t a cold, this isn’t an influenza, this is serious and it’s going to need everyone to support and help. I know that there’s a lack of trust of the health personnel among the Nicaraguan people, but when the Coronavirus arrives and they feel in their own flesh the magnitude of this problem, we’re going to need all the doctors. So it’s necessary that they work together. I believe that the peak [of contagion] for Nicaragua is still a few weeks away; I believe that when it arrives perhaps there’ll be some medications as well, but for the meantime I beg you please, that what we need most is for you to stay home.

There’s debate in Nicaragua as to why they haven’t done massive testing for Covid-19 as some scientists are demanding. The government hasn’t offered any transparent information on the tests they have realized. They say that they’ve performed some 100-200. What do you think of this number?

In order to be able to control the virus, we need massive testing. For example, the country that has really been able to change the curve has been South Korea, and the difference lies in the massive testing. But, as I said before, if there’s already been a case in Nicaragua, we don’t have time to be talking about whether the government approves of this or not. Here, we also don’t have testing the way we’d like to. It’s already very late to be talking about many of these things, you have to stay home and if there are tests for the serious patients, then they’re done, but if not, you have to assume that any person with fever and flu-like symptoms has Covid-19, until proven otherwise.