The interview was published Sunday (Feb. 15) and Progreso Weekly has translated excerpts. The translator’s clarifications appear [in brackets.]
****

“The reception of the Russian military delegation [in all three countries] was provided at the highest political level. In addition to communicating with the heads of the military departments, there were meetings with the heads of state — Nicolás Maduro, Daniel Ortega and Raúl Castro.

“And they were not protocol. The conversation was serious, principled and concrete, on all aspects of our cooperation. In the case of Cuba, President Raúl Castro led the negotiations. The main purpose of this visit was to agree on practical steps for the implementation of [Castro’s] meeting with Vladimir Putin [in July 2014].

“I would like to stress that these were routine visits, not extraordinary. They were not the result of the sanctions [against Russia] from Europe and the United States. Yes, I’ve heard that many today say that Russia became involved in the problems of Latin America after the sanctions [were imposed]. This is not the case.

“For us it has always been important to dialogue with Latin America and over the past two years, our Minister has twice made trips like these. And our interaction with the countries of Latin America is not a junctural approach.

“[The trip was] a well-thought-out action to strengthen regional stability and to help states in the region to build their armed forces. We are sympathetic to actions in Venezuela, Cuba and Nicaragua that promote socio-economic development.

“We firmly believe that further progress in these areas requires reliable, strong armed forces. It’s not about militarizing the economies of these countries, but about establishing a reliable barrier to the obstructionist or terrorist forces that exist in the region.

“During the visit, great attention was paid to analyses of regional problems. […] Of course, particular attention was paid to the activities of the United States in the region. Washington policies there raise many questions. Suffice it to say that in this part of the world, the Americans have set up 24 military bases, in effect, they have wrapped up the region.

“The Americans impose alien values on these countries. They are trying to change the governments that are unwanted by Washington politics. The leaders of the countries visited by Sergei Shoigu clearly understand the problem of the ‘color revolutions’ that many countries in North Africa have experienced, and view the attempts to organize them in the territory of the former Soviet Union as a serious challenge to the security of the states of Latin America. In this regard, we support the efforts of the leaders of Venezuela, Cuba and Nicaragua to strengthen their national sovereignty and independence. […]

“In recent years, we have made good progress in the development of military and military-technical cooperation with states in the region. We have intensified the exchange of military delegations and maintain effective consultations through our general staffs. Our colleagues come to us as observers to military exercises.

“The countries in the region are in urgent need of qualified officers and the Russian military and educational institutions are ready to assist them. Many thousands of young people from Latin America are studying in Russia today. The knowledge they acquire is invaluable.

“Today we’re thinking about the development of cooperation with the armed forces in the field of military medicine […] especially in the Navy and the Army. By the way, these countries have expressed their willingness to hold joint exercises. We have developed agreements on the simplified access of Russian warships to ports in the region. Some states are studying the possibility of establishing logistics points.

“I would like to stress that this is not about creating bases. We are talking about helping our ships when they are on long-range missions, providing them with water, food, recreation and, of course, ship maintenance if necessary. For example, during our visit to Nicaragua, such an agreement was signed between the defense ministers of the two countries.

“Generally speaking, [Gen. Shoigu] in Latin America confirmed the common interests of the states of the region and Russia. In a lot of cases, they are clear; there is a common desire and commitment to work together. Trying to solve all problems alone does not work. We are ready to work together. 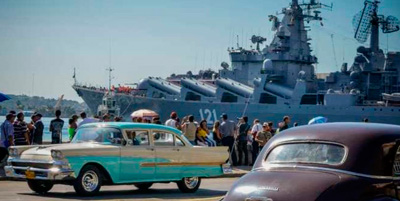 “The steps taken by Havana and Washington to restore diplomatic relations, and the release of Cubans from U.S. prisons are very welcome. Overcoming years of confrontation in the bilateral relations of Cuba with the United States would be, without a doubt, in the best interest of both states and of regional stability.

“We hope that the U.S. administration will finally abolish the commercial and financial blockade of the island. For several decades, it caused severe damage to the economy of Cuba and encroached upon the rights and legitimate interests of the Cuban people. We intend to continue to provide Cuba with our full support on this matter.

“I would like to draw your attention to a new initiative of the Minister, about training opportunities in Russia to citizens of this region in the Suvorov and Nakhimov cadet schools. In fact, we have adapted our practices, so the children of officers may be taught in such establishments. During the visit, the Minister handed over the draft documents and we hope that soon we will visit the delegations of these states to review existing practices, with a view to reaching concrete agreements. […]

“During the visit, all defense officers in these countries expressed great interest in studying the Russian language. It is not just an imperative need for soldiers in the region to know Russian but also as it relates to the large number of Russian military equipment and weapons [they use], they just need to learn Russian, the language itself, and go from there to Russian culture and history.

“We encourage this attitude of colleagues and we will provide full support, including the creation of special courses of the Russian language in these countries, for example, when you create a service center where Russian military equipment is serviced.

“Nobody today likes the desire of one country to dominate all political, economic and financial life. This diktat was rejected by all states. It is not conducive to an independent socio-economic development of states. In this context, the states in the region want to support the Russian initiative to establish an equitable polycentric order. It is important that our colleagues — not only in the course of our visit — have reaffirmed their principled support for the position of the Russian Federation. Also, in various international forums, they are voting on documents in unison with Russia.

“Thus, the visit of the Minister of Defense to Latin America confirmed the common interests of the states of the region and Russia. In many cases, they are clear; there is a common desire and commitment to work together. Trying to solve all problems alone does not work. We are ready to work together.”