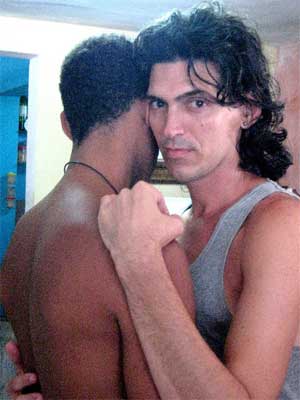 HAVANA TIMES — Two years ago I interviewed Michel (Nonardo) Perea Enriquez, writer and plastic artist. Homosexual. His partners, always occasional, were guys who defined themselves as heterosexual in public and even in private adopted homophobic attitudes and were never seen with him in the street.

Ricardo is just one more of those types. I had only just met him, a little over six months ago, and thought Michel could not expect much from a relationship with him.

Two months ago Michel surprised me with some news: Ricardo is living with him in his house as his official partner.

HT: Do you consider yourself gay?

Ricardo: I consider myself bisexual.

Ricardo: I started off in that world at age twelve, for money. I went with my friends to Vedado, five of us. One of them was with a tourist who gave him a hundred dollars every day. I went about with them and that’s how I got started.

HT: You were forced into it by your financial situation?

Ricardo: My financial situation was always good, but when I was twelve I stopped paying attention at school, it was a disaster. My father closed all the channels. I was already smoking and wanted to be independent and not depend on anyone.
HT: Were these men young or old? How did you feel being with them if you did not like men?

Richard: They were of all ages, usually over forty. The first time a man touched me and tried to kiss me, I slapped him. It was my immediate reaction. My friends were two or three years older than me and talked with me, they explained things, so I relaxed a bit… That day I didn’t have sex with him. He touched me, I touched him … He gave me twenty dollars for that, and we arranged to meet the next day. That day I did have sex and he paid me $120.

HT: How did you feel?

Ricardo: At first I felt weird. I had never experienced, and it never crossed my mind to be with someone of my own sex. It seemed incredible, supernatural. I never thought I’d fall into that trap and that’s how I’ve continued up to the present. 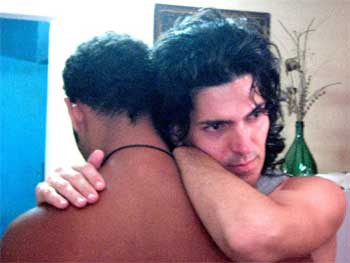 HT: Did you have an erection with that first relationship?

HT: But for that you must have liked it up to a point…

Ricardo: I guess so … I can’t explain whether I liked it or not. I just know it felt weird.

HT: Had you already been with girls?

Ricardo: Yes, I was going to boarding school. I was crazy about girls.

HT: But at that time you were not bisexual. Being with a man for money does not make you gay or bisexual. When did you really start to like men?

Ricardo: I am now twenty-three. I’ve been with my current partner (Michel) for more than a year. As far as I’m concerned I really started to like men since I’ve been with him.

This is my second male partner. The first was a boy younger than me; I liked him but I wasn’t in love. I think he was. I couldn’t imagine the love between two men. I thought it was just sex. With a man you can do things you can’t do with a woman, they do things differently. There are things you have to beg a woman for and with a man they are easy … I wasn’t very liberated either, some things were taboo for me. And I didn’t let anyone touch certain places, or do certain things. With Michel I’ve been liberated.

HT: Why did you start a relationship with him? He is poor, has nothing to give you.

Ricardo: I met him at the house of some friends. He impressed me right away because he’s very feminine, very docile. I also saw he liked me too.

HT: Do you see him as a woman?

Ricardo: I notice his feminine traits, but I am aware of being with a man.

HT: Last year, Michel told me you only came from time to time for sex, you didn’t go out with him, and walked apart if you did … now you’re living together, your neighbors know he’s your partner …

Ricardo: I know … He’s mad about me and I’m mad about him. It’s the best thing that’s ever happened to me, not counting the women.

HT: So your female partners have a special place.

Ricardo: The best female partner I had so far was a girlfriend. Michel has yet to get me to the point she did but there’s not much difference. It’s very close, and it’s not just the sex.

HT: Does what people say, your family, affect you?

Ricardo: It’s not easy. I’ve been slowly breaking down the barriers. I can’t do things all at once. I’m living with him now, we go out together but my family doesn’t know anything. They imagine I’m living with a former girlfriend. I’m not ready to tell them yet. I don’t know if I ever will.

Nor is he ready to show his face in this interview. Ricardo is not his real name. Currently he is waiting to be discharged from military service so he can start working and be able to help Michel more financially. Now and again he sells something and gets some money.

One thought on “Slowly Breaking Down the Barriers”