They call on state workers and those outside the country to join with them in a national political organization to end the dictatorship.

HAVANA TIMES – The political initiative for a National Coalition was presented on Friday, January 18, by the Civic Alliance for Justice and Democracy and the National Blue and White Unity. The aim of this new grouping is removing Ortega from power, dismantling his authoritarian regime, and generating a “change in the political culture” in order to rebuild Nicaragua.

The Coalition calls for the inclusion of all the democratic forces, urging them to unite in the civic struggle against the dictatorship, for human rights, the freedom of the political prisoners, electoral reforms and the restoration of Nicaragua.

“We’ve put emphasis on inviting and calling on all of Nicaragua’s political forces to join. We’ve held talks with political organizations, principally the political parties, so that they begin incorporating themselves into this process of defining what a National Coalition should be – a process that we hope will be as brief as possible.  The basic design has already been worked out in bilateral meetings,” indicated Juan Sebastian Chamorro, executive director of the Civic Alliance.

The political deadline for the conformation of the National Coalition is February 25, chosen for its political symbolism as the day in 1990 that the FSLN lost the national elections to the National Opposition Unity, bringing Violeta Barrios de Chamorro to the presidency.  However, it’s not a hard and fast deadline. The important thing, according to the executive director of the Civic Alliance, is to assure the solidity of this organization.

“If it’s possible to consolidate the Coalition earlier, it’ll be done earlier. What we want is for the coalition to reach its objective of maximum inclusion. We don’t want to generate a straitjacket in terms of having it ready before, or finishing afterwards. The important thing is that it be a solid, representative, inclusive and democratic coalition,” stated the Coalition’s spokesperson.

The Coalition won’t limit itself to the electoral arena. It will also insist that the root of the human rights’ violations, and the persecution of political prisoners, opposition members and released prisoners lies in the Ortega regime’s usurpation of power and their formation of a “non-democratic state”.

“In no way are we abandoning the struggle for our freedoms and for transitional justice.  Along with the new Nicaragua that we’re going to reconstruct, a national political organization is needed,” expressed Felix Maradiaga, a member of the National Unity’s political council and also a spokesperson for the Coalition.

Regarding the nomination of candidates to electoral positions in case the elections are moved up and their transparency is guaranteed, Chamorro affirmed that such a selection wouldn’t be made by pointing a finger, but through a democratic process. However none of this would be contemplated until the other social actors are all incorporated into the National Coalition.

“This will be a topic for discussion, and it will be a hot topic, because we have to assure the legitimacy of a democratic process under the current conditions. We must take into consideration that it’s difficult to do so, even with a process of primary election. It’s a complex situation from a political point of view, but it’s a topic that will be discussed when all of the other members have been incorporated.”

Commissions in the departments and municipalities

Chamorro and Maradiaga explained that while the Civic Alliance and the National Unity have one voice within this new coalition, they’ll conserve each one’s identity. This will also be true of the other movements that join in during the upcoming weeks.

Maradiaga emphasized that neither the National Unity nor the Civic Alliance by themselves are going to “pull the cart of Nicaragua’s reconstruction.” He insisted that the process is necessarily inclusive, and they’re betting that citizens who don’t belong to any of the political parties or form part of either of the two umbrella organizations will want to participate in the process of building the Coalition.

“In the territories, there’ll be work commissions to incorporate those who want to form part of it. In summary, this represents a full recognition that the reconstruction of Nicaragua requires the majority of Nicaraguans,” Maradiaga stated.

Chamorro added that those people who are affiliated with different political parties could also be part of the Coalition.  He felt that citizens shouldn’t be left without the possibility of belonging to the Coalition simply because they’re in an organization where some leader had committed an act that was “historically repudiated”.

“We want to make it more inclusive, and for that we’re insisting greatly on the concept of rebuilding Nicaragua. The regime has destroyed the country’s institutional structure and the electoral system, so we’re proposing reforms. They’ve also destroyed the economy and the social system, so the idea of this Coalition is to change the political culture in Nicaragua and rebuild it into an inclusive culture,” he declared.

Last week, the National Assembly announced they would be undertaking reforms to the Electoral Law. Deputy Gustavo Porras warned that this would only be discussed with the government-allied Supreme Electoral Council, and with the political parties that are currently represented in the Nicaraguan parliament.  The social and political movements that were organized following the April rebellion would remain excluded.

During the presentation of the 2020 legislative agenda, Porras assured that the electoral reform would be realized with the objective of “strengthening the popular vote, the system of political parties, the electoral organization and the technical-electoral system headed by the Supreme Electoral Council.  He later emphasized: “We’re going to follow up on this so that no one in the country continues saying that the deputies don’t do anything.”

Chamorro said that if they really wanted to undertake a reform and explore a possible solution to the national crisis, the regime should hold the broadest possible consultation. If not, it would be merely a “cosmetic” reform, without any legitimacy. They’d only be consulting a “false opposition”, not the one represented by the Civic Alliance and the National Unity – organized in the wake of the Ortega-directed massacre of the 2018 citizen protests.

Maradiaga explained that in the conversations they’ve had with the Organization of American States (OAS) and other international bodies, there’s general recognition that without a really substantial electoral reform that can restore trust in the system, any presidential elections would have no credibility.

Regarding the impact of the Coalition in the international arena, Chamorro declared that when they put out the call to establish it, a meeting was organized with the ambassadors accredited in the country, to explain the nature of the organization.

“In relation to the sanctions, I can only tell you that it will be actions of those in the government that lifts these sanctions, or not.  As things are going, it seems like the sanctions are going to get heavier, and that they’re not going to adjust to a rhythm of waiting.”

Calling on the State workers, exiles and the community outside the country

The Coalition’s pronouncement comes amid a climate of uncertainty that prevails among the public functionaries, due to the crisis of the dictatorship. Juan Sebastian Chamorro of the Civic Alliance asserted that the call to enter into the Coalition, goes out also to the public servants, officials of the National Police and all those workers who have invested their labor in serving the public and have fulfilled their mission without becoming involved in anything illicit. “They have a place in the new Nicaragua,” he assured. 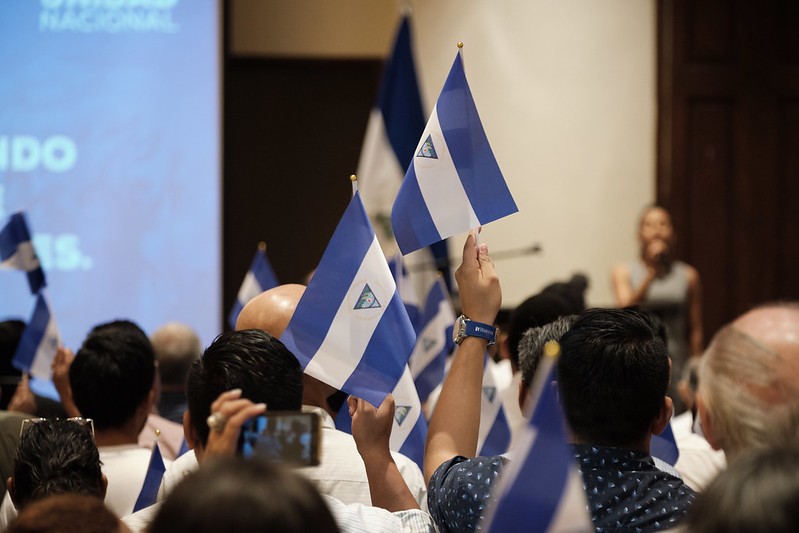 One of the chief concerns of the Coalition is recovering the country’s productivity and the trust that outside investors considering coming to Nicaragua have lost. Maradiaga emphasized that when they refer to the “reconstruction of Nicaragua”, the chief objective is restarting the economy on the right foot.

“More than 400,000 jobs have been lost. The reality of exile is connected to the regime. In that sense, there’s already a well-advanced conversation about a social contract. That’s not just rhetoric, it’s focused on recovering productivity and trust in the country. We insist that the chief sanction holding Nicaragua back, is Daniel Ortega’s regime, a regime that has caused unemployment, that is generating a lack of international trust in the country to attract quality investment,” Maradiaga repeated.

Chamorro explained to the more than 80,000 exiles in Costa Rica and the Nicaraguan diaspora in general, that the Coalition wants them to form a fundamental part of the entire process, since without them “this snapshot of Nicaragua” that they want to embody wouldn’t be complete.

Juan Sebastian recalled the spirit of unity that filled Nicaragua in April 2018 when the citizens went out on the streets and no one asked if they were from a political party or from this or that group. “Let’s bring back that spirit of inclusion, of belonging to a change. It’s what we want to revitalize with the launch of this Coalition and the call to join it,” he underlined.

Although there’s no indication of any improvement in the economic situation, some analysts allege that the recession is becoming the new normal, and people are getting used to living in this situation. The government continues imposing more taxes and reducing subsidies without this sparking an outbreak of protest, as occurred in 2018.

Chamorro argued that there aren’t any further protests because the National Police has imposed quiet by the route of terror, harassment and aggression, each time that the citizenry have attempted to hold a mobilization. Even though the experts point to people growing accustomed to the situation, he said the situation is worsening.

“Nearly a hundred people were laid off from the financial institutions this week, and that’s an element that we’re going to be seeing more and more frequently. The fact that the economic crisis has in some way stalled doesn’t mean growth. That is, there really was an enormous drop in 2018 and the country has remained in a very depressed state,” he expressed.

On top of the imposition of tax reforms and the elimination of subsidies, Chamorro noted the elimination of public support programs for those in poverty and the lack of external financing. Putting these together helps us understand that the stability that some perceive is at a level far inferior to that of previous years.

The former director of Funides, the Nicaraguan Foundation for Economic and Social Development, doesn’t believe that new investors will be coming to Nicaragua, or that there’ll be any real uptick in economic activity until there’s a solution to the political problem. Such a solution could only be within reach if free and transparent elections were held and the rule of law and institutional checks and balances were recovered.

Restore respect for the national flag

A few weeks ago, the Civic Alliance announced a “separation” in order to redefine the roles of both organizations.  This unleashed endless speculation about a rupture in the opposition. The communications error was offset by the announcement of the Coalition, but they’ve attempted to learn from this experience.

“The mistake we made with that topic of supposed separation caused us to reflect a lot on the importance of having a communications program, one that is clear and precise, that tells people what this Coalition wants, what we have to offer the new generations.” Chamorro specified.

Maradiaga mentioned: “we want to recover that respect for the blue and white flag in the sense that no political party’s flag is above the national flag.”