HAVANA TIMES – Every time she looks at the photo of her only three sons, crowded into the back of a Police pick-up truck, Juana de la Rosa Lesage Guadamuz begins to cry. She cries because her boys are still prisoners. She cries because she misses them. She cries because she recalls the morning of July 11 when they were taken away. She was there, together with the whole family, when dozens of Police arrived to arrest Luis Miguel, Jean Carlos and Harvin Esteban Lesage, three music-loving youth who since April had dedicated themselves to singing in the protests.

From that day on, Juana’s house hasn’t been the same. Those afternoons and nights filled with music, when her three sons would get together to compose and sing, are now nothing but a memory. Nearly four months have passed, but it’s been like an eternity to her. “They always ended up singing in the living room; the house was an explosion of music. But now they’re in jail because Daniel Ortega can’t tolerate having the youth exercise their right to protest,” Juana declares.

Luis Miguel, 28 years old, Jean Carlos, 25, and Harvin Roberto, 20, are in prison for having participated in civic marches in their native city of Jinotepe. They’re now accused of terrorism, organized crime, kidnapping, hindering public services, and grave damages. “The rosary of crimes that they’re accused of are essentially the same ones that all the young people who protested in the country are accused of,” their mother affirms. She insists that they’re innocent. “They’re good boys,” she repeats over and over. That same phrase is echoed by neighbors, friends, classmates and acquaintances of the three singers.

“It’s been a nightmare” 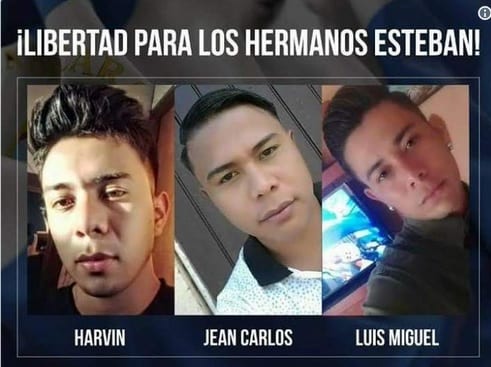 The youth were arrested three days after the brutal massacre that the Ortega regime carried out in the department of Carazo. At least 20 young people were killed there when paramilitary groups, together with police patrols, attacked simultaneously from different points in the department, including by sea, to “sweep away the barricades” of that department, one of the most unfriendly to the dictatorship.

Luis Miguel and Jean Carlos are rappers, known respectively as “Mistico” [Mystic] and Jeanco”. Both used to sing in activities organized by the Nicaraguan Tourism Institute or sponsored by several of the mayor’s offices in Carazo, where they promoted their compositions. Upon seeing the Ortega government’s brutal repression of the protests, both decided to go out on the streets and join the protest. Immediately, the youngest brother, Harvin, joined them. Harvin also sings, but he prefers ballads.

“They’re three kids who are studious, talented, affectionate, well-mannered and hard-working. I say this with pride, because they’re innocent of the things they’re accused of, and the things that were invented about them,” Roberto Esteban, father of the three musicians, wrote on Facebook after their detention.

When they were arrested and taken away, the entire family screamed at their captors that they weren’t criminals, recalls Juana de la Rosa. A police commissioner who led the operation responded that they were being captured “for being road-blockers.”

The three were taken to taken from the town of Santa Teresa to the Jinotepe police station, and from there to the cells of the El Chipote interrogation jail. “I spent a week sleeping on the pavement [outside the jail], until they gave me permission to see them,” Juana said.

The first thing she did when she saw them was to “check them out” to confirm that they hadn’t been tortured. “They were alright, so I went back to Carazo to make a dinner for them. But when I returned, they told me that they’d been transferred to another jail – La Modelo [in Tipitapa, a half hour from Managua],” she relates.

Afterwards, when they were shown to her, they only had time to tell her: “don’t worry, at least we’re in a better place, because we can see the daylight a little.” Before that, their mother says, “they’d been in dark cells where they didn’t even know what they were eating.”

The last time she spoke with them, separately, they begged her not to shed another tear. “They asked me to feel proud of them, because they haven’t done anything wrong,” she affirms.

Luis Miguel, the voice of the protest

I see the government repressing all the people in the streets,
But they’re never going to stop us, ‘cause it’s something they can’t beat.
I think that things can’t all be seen through rose-colored glasses,
In this world there are some people just like poisonous gases,
Young folks here are protesting in a furious way,
Against a government that’s acting like Somoza’s today.

That’s how Luis Miguel Esteban Lesage sang on the social networks. Prior to April 18 of this year, he also worked at a Jinotepe gas station. He composed and sang in his free time, performing anywhere that he could show off his talent.

His mother remembers him as a restless child who liked soccer and who learned carpentry from his father. “He’d go to the shop and make wooden houses,” recalls Juana de la Rosa.

The family discovered his passion for music one day when he came running to make some wooden sticks to play in a band. “From the time he was little, he’d get together with Jean Carlos, who was his shadow. They didn’t want to tell me what they were doing. I later learned that they were beginning to compose their rap songs,” Juana says.

Mara Espinoza is married to Luis Miguel and they have a ten-year-old son. She’s only been able to see him twice. He comforts her when she cries, and asks her to take care of his parents and his son. He also told her that he’s still writing songs. In fact, he already wrote one dedicated to “Chema” Campos, one of the young people that was killed by the regime in Jinotepe last July 8.

“He tells me to take it easy. He’s emotionally strong, because he’s convinced that his struggle is just. He doesn’t regret being involved in the marches and protests, of using his social media and his voice to protest, because he hasn’t done any of the things they’re accusing him of,” his wife indicates.

Jean Carlos, rapping against the dictatorship

I’d really want to live in that country we’ve projected,
Where all of our rights are truly respected,
Where all our politicians don’t just leave us on the sidelines,
And don’t use the State as their personal goldmine.
Where our rulers don’t deceive us with falsehoods and hypocrisy,
And don’t wipe their bottoms with our democracy.
Where we no longer listen to incoherent speeches,
And there’s liberty that’s evident to all and to each.
Where they no longer foster a hatred so unblinking,
And no one calls you out for a different way of thinking.

This was one of the songs that “Jeanco” Esteban Lesage sang to hundreds of people gathered in front of the Santiago parish in Jinotepe on April 21. Juana de la Rosa calls her middle son the most restless, but also “a fighter”.

Jean Carlos was studying his final year of business administration in a Carazo branch of the Nicaraguan National Autonomous University (UNAN). He reportedly joined the protest movement when he saw the injustices and the scorn for the Nicaraguan youth that the government was displaying. His mother remembers him as constantly singing, but also with his books. “He has a ton of books, he always spends his time inside, reading,” she expresses.

His friend Irma Mora describes him as a self-taught young man who wanted to read to learn about the world. “He’s a very friendly guy, he always liked being surrounded by people, and it hurts to know that he’s now in prison for demanding a better world,” she says.

His mother says that the last time she saw him she couldn’t embrace him, but she smiles as she recalls how from inside, she heard Luis Miguel yell: “Parents – I’m here! Long live a free Nicaragua!” Hearing the shout, Jean Carlos also smiled and blew her a kiss through the glass that separated them.

“Give a light to those who have searched
Against the heavens and the humans for their freedom,
Give a light to this people who love life so much
In Nicaragua….” [song by Katia and Salvador Cardenal]

Since his detention, the video of Harvin Roberto Esteban Lesage singing this song from the group “Duo Guardabarranco” has gone viral on the social networks. The youth was studying his second year of marketing in the Central University of Nicaragua in Jinotepe, and he loved singing romantic songs.

“His brothers have always sung, but he began to discover his own talent for singing some four years ago,” his mother affirms. She notes that her children all got their musical talent from her, because she herself had always dreamed of going on stage.

Leonor Trujillo is Harvin’s best friend. She’s known him since he was five. She describes him as a very joyful person. “We never stopped laughing. He’s a good person, because he’s always stayed close by whenever someone needs him,” she says.

Leonor sent him a letter in jail in which she told him that she loved him because he’s an unconditional friend. “I asked him to have faith, because I hope that he’ll soon be free,” she affirms.

Leonor sheds tears when she recalls that Harvin was planning his birthday party for this year. “He never liked to celebrate, but this year he was excited about it. He wanted to get his friends together at his house and he even wanted to have a pinata,” she declares. A month after his arrest, on August 11, Harvin turned 20 years old in prison.

“One time, I saw him in a protest, and I told him be careful,” states Leonor. “He answered: ‘Don’t worry, if I’m here it’s so that you can be okay, so that Nicaragua can be okay. I know that it’s a difficult fight, but if I just stay home, we’re not going to do anything. I’m here for my family, for all of you.’”