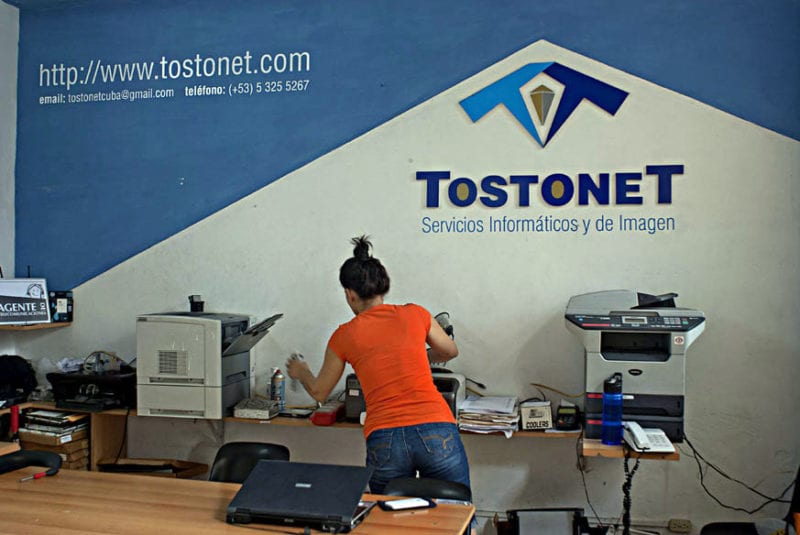 HAVANA TIMES — A small company in the heart of Havana has been struggling to remain afloat and push its projects forward since October of 2012. Following basic marketing advice – choosing a short, catchy name that’s easy to remember – its founders opted for the humorous appellation of TostoneT, the fusion of the Cuban toston (a fried plantain snack) and the abbreviation for new technologies.

In addition to being the head of TostoneT, Liber Puente Baro offers seminars on the use of new technologies in business, well acquainted with the pros and cons of self-employment in Cuba. At the start, he offers these words of warning: “Self-employment is tacitly recognized in Cuba – Raul Castro stated it had come to stay – but no measures that favor and facilitate the work and development of self-employment are in effect.”

HT: What does TostoneT do?

LPB: We repair, give maintenance to and configure laptops, PCs, printers and cell phones. We also design, edit and print documents, images and other materials, as well as develop and sell software products. We also update cable devices to give them additional functions. There’s a Cuban institution that publishes this software, but next to no one knows about this because most Cubans do not have access to the Internet, and those who do know little about the information available in Cuban web portals.

To set up their business, the founders of TostoneT had to request several licenses: one to repair office equipment, another for the printing of photographs and, most recently, one to operate as an ETECSA telecommunications agent. In addition to these services, TostoneT wishes to offer others, but currently can’t for lack of infrastructure. According to Liber, Cubans ceased to be treated with respect and his company seeks to bring back good services.

LPB: There’s a great fear of business in Cuba. The image it conjures up is some guy becoming rich, but they’re more than that. It’s crucial for small businesses to base their operations on the principle of socially responsible, community practices. Businesses change their communities: through publicity and the services it offers.

HT: Some believe that a laptop can no longer be used after it breaks. How do you get your hands on spare parts?

LPB: We buy used laptops and get the parts from these, but it isn’t enough. We are thinking of a project that, in addition to supplying us with pieces, will encourage tourists to approach the community. It would work as an exchange: visitors would bring us broken or used equipment and we would offer a product or service in return, a guided tour of the community, crafts, etc. It would be an opportunity for the self-employed, as it would be a way to sell their products, for the tourist, who would get something out of it, and for us, as it would allow us to broaden our services. These small businesses are very limited in terms of innovation.

Many Cuban State companies have no means of fixing broken laptops. What’s more, they’re not interested in fixing them, they prefer buying new ones. In other words, Cuba, a poor country, has the same philosophy of buying new things and throwing them out when they break that even wealthy countries are questioning. 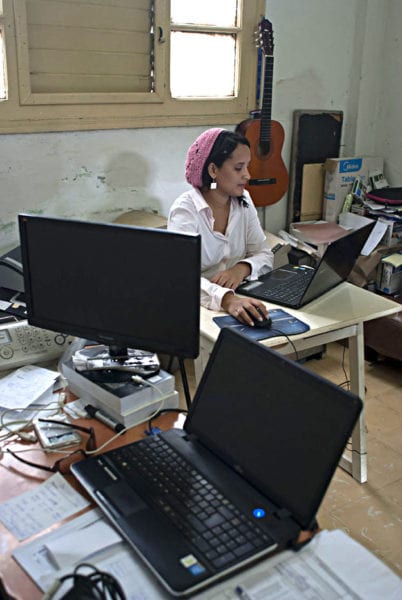 A lot of technology is thrown out around the world because of planned obsolescence. It’s a curse we have to learn to live with. Entire countries and individuals throw out technologies that took years to produce, simply because it’s no longer appealing or isn’t fast enough, or the software they use isn’t compatible with new products, etc. I’m not talking about the time it took to produce them but about the time it took to reach that level of knowledge. We human beings are reaping the benefits of 200 years of civilization and development, the industrial and technological revolution. Planned obsolescence is a means of encouraging consumerism, wastefulness and, indirectly, the destruction of the environment.

HT: What other projects could TostoneT push forward?

LPB: Many, but we need infrastructure. It wouldn’t help much if Copextel gave us five new computers, because we’d be repeating the same model. We’ve discussed projects with local government authorities – we’re part of the community work commission of the People’s Council – to try and come up with answers to many of the problems faced by the community, solutions that have been postponed, and information and communication technologies can offer a coherent answer. These things already exist; we’re not reinventing the wheel.

HT: Are you working on any specific project?

LBP: Setting up a digital data collection system for epidemiological information at clinics. There, it’s done manually and without a truly standardized system. Medical doctors tell us that it’s difficult, unpleasant and tense work and that they see no results because the data isn’t used properly. We believe there are three important things in this project. First, because people do not see the effort the government is making to have a medical doctor in each community. Professionals are overwhelmed by the amount of work they have to do – deal with the maternal and child program, epidemiological issues, regular patients, elderly patients, pregnant women, house calls, in short, there’s so much demand that the system becomes stressed. Second, we’re a tropical country and we need an epidemiological program that employs a digital and well-functioning system. Lastly, there’s the question of tourism, which is a source of revenues for the country, so health issues are very sensitive. The outbreak of any disease can be very harmful for the person, family and environment, and for the image we project as a country.

HT: Have they authorized you to carry out this project?

LPB: Yes, but we would have to use our own resources. We have the support of the chair of the People’s Council, the director of the polyclinic has approved the project but has no computers. We also know there are no computers at family clinics. ETECSA has told us they don’t know how to set up that network. We’re not magicians, but we know that it can be set up with basic equipment.

In this municipality, there are several ministries and companies that throw out equipment as if it were garbage. TostoneT has a contract with a salvaging company, not to sell it as scrap but to be allowed to secure equipment that has been thrown out elsewhere. Generally, these devices have one specific component that’s damaged and many others that are still useful, but there’s no awareness about this.

HT: What other obstacles and limitations do you face? 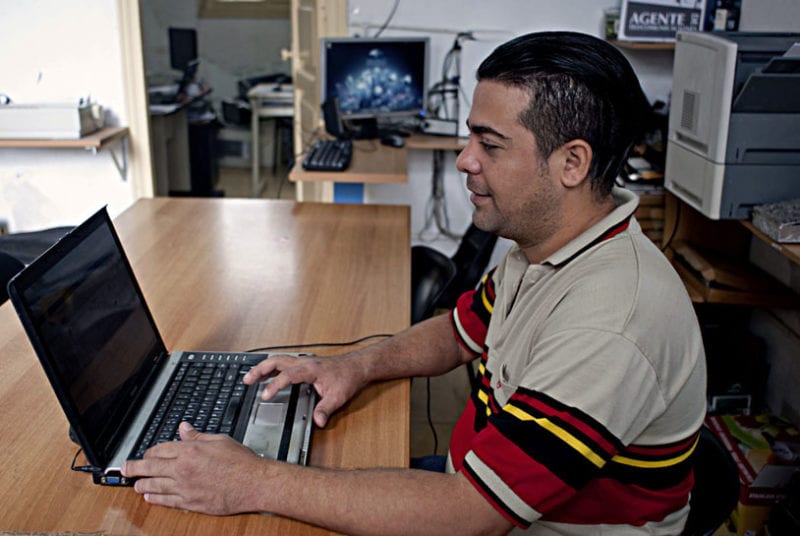 LPB: It’s complicated. I’ve been trying to get a loan from the bank for two months. It’s only 20,000 pesos (1,000 USD), which isn’t even enough to cover our monthly expenses. We want to do everything without any financing from abroad. Some companies have hired our services, but taxes are also steep: they charge us 50 percent of our gross income, plus 10 percent of our monthly sales. And they do not take into account what we spend to provide our services.

HT: But TostoneT has been in operation for three years…

LPB: Yes, we remain afloat in very uncertain conditions, because there are no supplies or spare parts readily available for our work. As we all know, there’s no wholesale market designed for our needs.

LPB: I can bring them into the country for personal use, not commercially. I have to pay a customs tax, a tariff, which is what countries set up to protect their domestic market. But there’s no domestic market to speak of here, we don’t even have silicone paste in Cuba.

HT: Is that the main obstacle? The fact there’s no domestic market?

LPB: No, that’s just the tip of the iceberg. No distinction is made between the self-employed and the individual customer here, beyond the type of bank account and taxes one pays. That’s not fair, because we directly contribute to social welfare with our incomes. We work transparently and, in most cases, we’ve been willing to invest our resources in Cuba. It’s not that those who choose to stay have more merit, I think we’re all Cubans and entitled to the same dignity, we just differ in the paths we choose. But those who stay should enjoy the respect and recognition of those here, because they decided to stay, with all that entails tying your future to what happens in the country. You may be successful with your business, but, if the country’s economy is in decline, you won’t see much of that success and you won’t feel too prosperous. In other words, whichever way you look at it, when you set up a business here, you’re bound to the country’s destiny.

HT: What other obstacles and limitations do the self-employed face?

LPB: One of the simplest things the government could do is offer us training, and it doesn’t. Then, there are all the taxes they apply on us. In the foreign investment zone, an investor, particularly in the Mariel port (Special Development Zone), has up to 8 tax-free years. They only give us three months. I believe that, if they give us greater opportunities to grow and become established before they start collecting taxes from us, the self-employed would have greater revenues. There is no “seed capital” here, which is the money needed to start a business. You start out and only after some time are you entitled to ask the bank for a loan. It’s a limitation, because most of us don’t have that kind of money, which is why you have to look for loans from family or friends.

Another issue that’s just as important is that of human resources. You can’t do anything big on your own and TostoneT is not the exception, even though I’ve devoted all of my time to set up the business. First, it was Roberto Gonzalez Perez and I, working with our close relatives, then valuable, motivated and competent people began to join the team. We’ve also had to let some people go, for not everyone is willing to work hard every day, unsupervised. Finding the right people for the team is a challenge.

HT: Given all of these setbacks, why do keep the business going in Cuba?

LPB: Many tell me it’s absurd, that, given my knowledge, I could have a better job abroad, but the interesting thing is to do it here. It’s a mix of patriotism and sense of belonging. I’m a product of the revolution: my family is very poor, I’m the first to obtain a university degree on both sides of the family, I belong to a social sector that has been displaced. Nearly all of my relatives are working class, humble people, rumba-playing black Cubans. Though I have some relatives who live abroad, all of my roots and ties are here. It’s true, one can see positive results and have financial success, but it won’t be linked to my roots and it wouldn’t have the same flavor. I want to build something new with the stuff I’m made of. It may sound altruistic, deluded, but I think I’ll enjoy the final outcome more this way.