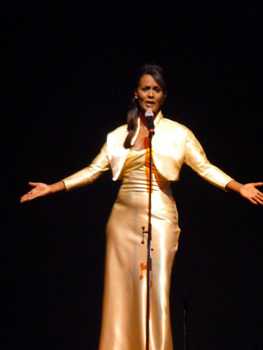 HAVANA TIMES — Cuban contralto Yaima Saez’ voice transports to the golden age of Cuban music. “It is a privilege to be placed alongside such renowned figures,” she told us during her interview for Havana Times.

HT: You have a rather unique voice.

Yaima Saez: Yes, I’ve done some finding out about this, and I hear it’s hard to come across a contralto voice like mine in tropical countries – they’re usually much more common in colder countries.

YS: I became a singer in a informal way. In 2002, I obtained a degree in Physical Education. During my student years, I was a member of a choir. That’s where my interest in becoming a singer first emerged.

In 2005, I was invited to Havana to take part in the Boleros de Oro Festival (“Golden Age Bolero Festival”) and many people in the world of culture insisted I participate. I thought, then, that so many people could not be mistaken and decided to become a professional singer. I’m always saying that I leapt straight into singing from the classroom.

HT: Tell us about your experiences at the El Gato Tuerto club.

YS: It was at this renowned cabaret in Havana that I began singing professionally before an audience. I performed there next to great figures of Cuban music for five years. I always say this place was a kind of real-world school for me, a place where I had the opportunity to improve my skills and broaden my repertoire.

HT: Is there any relationship between the profession you studied and singing?

YS: I think there is a link, because Physical Education is one of the most well-rounded careers, it prepares you for some form of relationship with the audience. It’s helped me, especially when there’s so much going on around you that you have to be completely focused for an hour or so.

HT: Where were you born in Cuba?

YS: I’m from Camaguey. Incidentally, my city will soon celebrate 500 years since its founding.

HT: Tell us about the song Perdoname Conciencia (“Forgive Me, Conscience”)

YS: It is a paradigmatic Cuban song performed by great voices, and being able to sing it was an important step in my career. It opened the door of the Lizt Alfonso company, its show Amigas (“Girlfriends”).

HT: What was the experience of working with this Cuban choreographer like?

YS: Working with Lizt Alfonso makes you a different person, a more complete artist. Being part of a musical broadens your artistic possibilities, particularly in the case of young singers – it teaches you to project better, understand what the lyrics mean and what you ought to convey through them also.

I was able to learn all this with this artist. In Amigas, I played Caridad. I had to take on complex and well-known pieces like Perdoname Conciencia. I also had some amazing experiences in places like Varen.

HT: Have you been influenced by other great Cuban singers?

YS: When you sing something like Mil congojas (“A Thousand Sorrows”), you can’t help worry people will think of Elena Burque, because of the characteristics of my voice.

Up to a certain point, it is a privilege to be placed alongside such renowned figures. That’s where the challenge is, in creating your own style, so that, even though people can compare you to someone, they can also say that the person singing is Yaima Saez. In any event, one has to draw from all these great voices, from Elena Burque, Omara Portuondo, Moraima Secada, Celia Cruz – they are veritable teachers for today’s singers.

HT: Tell us about Las Divas in Miami.

YS: It was an interesting experience I had the fortune of being part of. I have much rapport with Teresa Diego, one of the Diego sisters. This was what led them to invite me to sing at their show in Miami. There, I met and was able to converse with people who made history on the island, people like Annia Linares, Mirtha Medina, Ana Maria Perera. Other interpreters from abroad, such as Spanish singer Falete, were also there.

I recall that, when I saw Annia Linares (the singer I identify with the most), I was telling myself: “I would watch this woman sing when I was a little girl…now I have the opportunity to share the stage with her and have her praise my work.”

It was, without a doubt, an indispensable experience, because of what we learn from these women we remember so fondly and what they learn from us, the new generation of Cuban singers.

I hope I can continue to sing and I hope Las Divas will one day be staged in Cuba. For their part, they have said they feel very proud that this style of music is alive and well in Cuba.