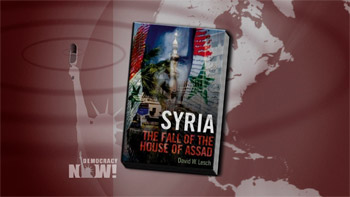 HAVANA TIMES —  In the wake of Wednesday’s bomb blast that killed top Syrian officials, we continue our Syria coverage with David Lesch, author of the biography, “The New Lion of Damascus: Bashar al-Assad and Modern Syria,” as well as the forthcoming book, “Syria: The Fall of the House of Assad.”

Lesch is a professor of Middle East history at Trinity University in San Antonio, Texas. “[Assad is] someone, I think, who started out with good intent,” Lesch says. “[But] rather than changing the system, that many of us had hoped from the beginning, the authoritarian system had actually changed him.”

AMY GOODMAN: We turn now to our next guest, continuing our conversation on Syria in the wake of Wednesday’s bomb blast that killed the top Syrian officials in Damascus. We’re go to San Antonio, Texas, where we’re joined by David Lesch, author of Assad’s biography, The New Lion of Damascus: Bashar al-Asad and Modern Syria. His forthcoming book is called Syria: The Fall of the House of Assad. He’s professor of Middle East history at Trinity University in San Antonio, Texas.

Professor Lesch, welcome to Democracy Now! Tell us who Bashar al-Assad is.

DAVID LESCH: Well, he’s someone, I think, who started out with good intent. Now, there are people who would argue with that, thinking that he was the evil dictator from the beginning. But I was able to meet with him frequently over a number of years, and I think he is someone who, in the beginning, people had high hopes and great expectations, and probably too many high expectations, as it turned out. I found him personally to be unprepossessing, unpretentious, even self-deprecating. But over the years, I saw him grow into the position and become much more comfortable with power. And I don’t mean that in a good way.

And what often happens is that, with authoritarian leaders in authoritarian structures, is that an alternate reality is constructed or orchestrated around this person by his sycophants, but those around him who praise him on a daily basis. And being only human, people tend to start to believe that they are something close to a prophet sent to save the country. And I think he started to believe the press, believe the propaganda. And so, when he—in all of his speeches since the uprising began, when he says that, you know, that the uprising is the result of pernicious forces from the outside working with unwitting accomplices on the inside trying to unseat the regime, I think he actually believes these things, he and his supporters, because of this alternate world that he sees that’s divorced from reality.

JUAN GONZÁLEZ: And, David Lesch, what about this issue that he’s—at least Syria has been seen for decades as a more moderate force within the Middle East and the Arab world, certainly more tolerant than, let’s say, the Saudi monarchy or the—yet, this enormous rebellion now, popular uprising, has arisen there, whereas Saudia Arabia remains remarkably calm in the face of the continued Arab Spring?

DAVID LESCH: Well, Saudi Arabia had about $130 billion that the monarchy injected into the economy soon after the Arab Spring began, just to calm the population and basically as a national bribe to prevent any sort of uprising from occurring. Syria, a country that does not have the riches of Saudi Arabia or the oil, you know, had no such luxury. And it is an authoritarian system, and then we see that the—especially the so-called secular republics across the Middle East, across the Arab world, are the ones that have been hit the hardest and the quickest. The Syrian regime, for a variety of reasons, has been able to withstand the uprising longer than, say, Mubarak in Egypt or Gaddafi in Libya, primarily because the military security apparatus has remained loyal to the regime, and for a host of other reasons, and perhaps most of all, their willingness to make that decision that there was a security solution from the very beginning and that they would crack down and repress brutally the uprising over time.

AMY GOODMAN: David Lesch, I want to ask you about how President Assad has framed the uprising against him. This is a rare German interview on public broadcaster ARD earlier this month. Assad said most of the people being killed in the country are sympathetic to his regime.

PRESIDENT BASHAR AL-ASSAD: If you want to know who killed, you have first to know who has been killed. We cannot tell about the criminal without knowing about the victims. And those victims that you’re talking about, the majority of them are government supporters. So how can you be the criminal and the victim at the same time? The majority are people who support the government, and large part of the others are innocent people, who’s been killed by different groups in Syria.

AMY GOODMAN: Assad went on to explain who he holds responsible for the Houla massacre in May, where, according to the United Nations, 108 people were killed, including 34 women and 49 children.

AMY GOODMAN: That is President Assad. David Lesch, explain his view and also when you changed your view of Bashar al-Assad.

DAVID LESCH: Well, this is consistent with the narrative of the regime since the beginning of the uprising, his explanation that he gave in that interview. And one of the saddest things, personally, for me, is that Bashar did have a genuine aquifer of support in the country early on, and he mortgaged all of that when he chose, instead of implementing dramatic reform at the beginning of the uprising, he chose to crack down, and so he lost his mandate to rule. He lost his legitimacy to rule.

For me, on another personal level, I saw this change, in particular, in 2007 in his “re-election,” quote-unquote, which was a referendum where he was the only one running for another seven-year term. And I met with him during the election process, and he had a kind of cathartic moment with me, where he really started—I could see he really believed the propaganda. And at that moment, I remember thinking specifically to myself that he’s now president for life, that he’s—he drank the Kool-Aid, that power is an aphrodisiac and that rather than changing the system, that many of us had hoped from the very beginning, the authoritarian system had actually changed him.

AMY GOODMAN: This killing of his inner circle yesterday and what this means, as it comes closer and closer to the palace? Can you talk about how the—his father ruled, Hafez al-Assad, and the killing particularly in ’82, the massacre of thousands in Hama? Do you think we could see anything like this happening all at once? I mean, thousands have already been killed, even now, in this last 16 months.

DAVID LESCH: That’s my big fear right now, in the wake of the bombing yesterday. The regime is going to come out, as we saw in the interview or the statement by the new minister of information in Syria. You know, he said they are going to punish whoever did this. You know, authoritarian regimes always want to be seen as strong and acting from a position of strength. My fear is that they’ll act convulsively and lash out in a way that casts a wide net. Certainly, there are those in the military security apparatus loyalists to Assad’s brother-in-law, Assef Shawkat, who used to be the head of military intelligence in Syria for many years. They could lash out, without regard for what the president wants to do or wants to see. Unfortunately, you know, from the regime’s point of view and from the opposition’s point of view, it’s a calibration of bloodletting, where the regime wants to repress the rebellion but—repress the rebellion, but does not want to engage in any massacres that might galvanize or compel the international community to act more assertively than it has already. However, in the wake of yesterday, my fear is that something could happen close to what happened in 1982 in Hama, and then the international community will be faced with a very difficult decision on whether or not to militarily intervene.

AMY GOODMAN: David Lesch, we want to thank you very much for being with us, author of Assad’s biography, The New Lion of Damascus: Bashar al-Asad and Modern Syria, as well as the forthcoming book, Syria: The Fall of the House of Assad, professor of Middle East history at Trinity University in San Antonio, Texas.