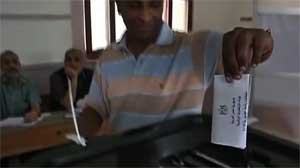 The elections appear to have been relatively free and fair, with voter turnout estimated at around 40 percent. While official results will not be announced until Tuesday, Morsi appears to be in the lead. The two candidates competing for second place are Shafik, the anti-revolutionary former prime minister, and Hamdeen Sabahi, a longtime protester of the Mubarak regime. We get an update from Democracy Now! correspondent Sharif Abdel Kouddous in Cairo.

AARON MATÉ: We turn now to Egypt, where preliminary results are emerging from the country’s first-ever competitive presidential election. Several independent vote counts put the Muslim Brotherhood’s Mohamed Morsi in first place out of 13 candidates. The Brotherhood had monitors in polling stations around the country. According to its tally, with 90 percent of the votes counted, Morsi came in first place, followed by Ahmed Shafik, Hosni Mubarak’s last prime minister. The two would go into a scheduled runoff that’s slated to begin on June 16th.

AMY GOODMAN: However, votes are still being counted, and at the time of the broadcast, reports are emerging second place might also go to Hamdeen Sabahi, a socialist candidate and founder of the Nasserist party. Turnout has been estimated around 40 percent. The official results will be announced Tuesday.

For more, we go directly to Cairo to speak with Democracy Now! correspondent Sharif Abdel Kouddous.

SHARIF ABDEL KOUDDOUS: Well, Amy, the polls closed last night at 9:00 p.m., and vote counting started right after that. Much of Egypt was glued to the TV, the state TV showing split screens of different governorates of the polling stations of the votes being counted.

While the actual results will come out—the official results will be announced on Tuesday, what is clear from preliminary results from journalists and from the campaigns themselves is that the Brotherhood’s Mohamed Morsi has—will probably be in first place, and he will go into a runoff. This is a testament to the Muslim Brotherhood, its weight and effectiveness and the weight of its political machine and its grassroots outreach campaign. He campaigned on a very conservative platform, portraying himself as the sole Islamist candidate that can implement Sharia law. And let’s remember, he’s not the Muslim Brotherhood’s first candidate. He’s basically promised to execute the plans and platforms of the Muslim Brotherhood’s first candidate, which was Khairat El-Shater, who is its lead strategist and financier.

Now, Ahmed Shafik may be in second place. He’s in a very tight run, it seems, with Hamdeen Sabahi as these votes are coming out. Ahmed Shafik, of course, is the former air force general who served as Mubarak’s last prime minister. He was appointed a few days after the revolution began. He was prime minister during the infamous Battle of the Camel, when the Mubarak regime sent in thugs to try and clear Tahrir Square. And he was forced out of office by protests three weeks later. He’s billed himself as the law and order candidate, but disorder seems to follow him wherever he goes. When he voted just the other day, he was swarmed by protesters as he emerged from the polling station. They hurled shoes and debris at him, and he had to be escorted into his car. His campaign spokesman—he’s very allied to the generals and to the military, and he’s very anti-revolutionary. And his campaign spokesman today told the New York Times that the revolution has ended. So, there was—there’s a lot of outrage amongst revolutionary forces if he does make it into the runoff.

However, we must keep in mind that votes are still being counted. And really, the dark horse in this race is really Hamdeen Sabahi, who is in this race for second place against Ahmed Shafik. He is a longtime protester against the Mubarak regime. He’s a socialist in the tradition of Gamal Abdel Nasser. He formed the Karama party, which is a Nasserist party. And he’s probably the only—well, he is the only leading candidate that was not a member of the former regime and who is not an Islamist. He has very strong revolutionary credentials. You know, there’s video of him showing—breaking through the lines on January 25th.

So, it’s a very exciting time right now. Everyone is watching the results as they emerge. And we’ll just have to wait to see who the runoff will be against Mohamed Morsi, the Muslim Brotherhood’s candidate.

AARON MATÉ: Sharif, as I understand it, there was a split between liberals and leftists in Egypt on who to support. You had Sabahi, who you mentioned, but also Aboul Fotouh. I wonder if you could talk about the results showing that, had—that taken together, these candidates attracted more support than the others, but because they both ran, they might have split the leftist liberal vote.

SHARIF ABDEL KOUDDOUS: Well, some have ruefully been talking about that fact, that Abdel Moneim Aboul Fotouh, he’s a former Muslim Brotherhood member. He left the group last year to run. He formed this coalition that brought together some revolutionaries, some liberal seculars, and combined them with conservative Muslims to bring kind of this rainbow coalition into his campaign. And some belay the fact that he may have taken—with Sabahi and Aboul Fotouh together, they beat even Mohamed Morsi, if you add the votes together. However, I think it’s important to realize that, especially in Egypt, the political map is not so cut and dry. You can argue that Hamdeen Sabahi took votes away from Ahmed Shafik. You can argue that Aboul Fotouh definitely took votes away from Mohamed Morsi. It’s a very complicated political picture here. There are many issues to do with secularism and Islamism, but also just the history of the candidates, anti-Muslim Brotherhood votes. So it’s a complicated picture. But, you know, if Hamdeen Sabahi hadn’t run, would Aboul Fotouh have done better? Yes, but it’s unclear how the others would have done, as well. So—

AMY GOODMAN: And finally, the—Sharif, the fairness and freeness of the elections?

SHARIF ABDEL KOUDDOUS: Well, I think, by most accounts, this was a well-conducted poll. The Carter Center and other groups have said that it was conducted better than the parliamentary elections, which were not deemed in the words “free and fair,” but were deemed to be largely free of irregularities and to reflect the overall opinion of the electorate.

AMY GOODMAN: Sharif Abdel Kouddous, we want to thank you for being with us. We’ll be speaking to you on Tuesday when the final results are expected. Sharif’s speaking to us from Cairo, Democracy Now! correspondent and Nation Institute fellow.