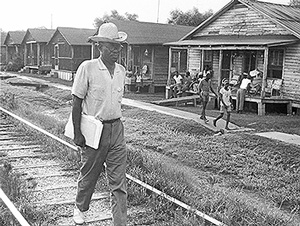 HAVANA TIMES – Hundreds of people marched in Hattiesburg, Mississippi, on Wednesday to mark the 50th anniversary of Freedom Day. On Jan. 22, 1964, Fannie Lou Hamer and other civil rights activists marched around the Forrest County Courthouse in support of black voting rights. The rally was the beginning of a historic year in Mississippi. Months later civil rights groups launched Freedom Summer.

More than 1,000 out-of-state volunteers traveled to Mississippi to help register voters and set up what they called, “Freedom Schools.” Out of Freedom Summer grew the formation of the Mississippi Freedom Democratic Party that challenged the legitimacy of the white-only Mississippi Democratic Party at the 1964 Democratic National Convention.

The period also saw the murders of three civil rights activists — Michael Schwerner, Andrew Goodman and James Chaney. Events are being held across Mississippi in 2014 to mark the 50th anniversary of this historic year. We are joined by Stanley Nelson, director of the new documentary, “Freedom Summer.” An Emmy Award-winning MacArthur Genius fellow, Nelson’s past films include “Freedom Riders” and “The Murder of Emmett Till.”