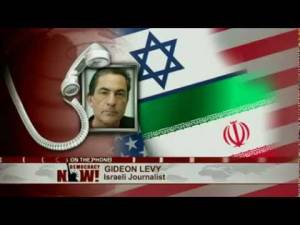 HAVANA TIMES — Could Israel launch an attack on Iran before the U.S. election in November? On Friday, Israel’s largest-selling daily newspaper, Yedioth Ahronoth, published an article suggesting an Israeli attack could be imminent.

The article reported: “Insofar as it depends on Binyamin Netanyahu and Ehud Barak, an Israeli military strike on the nuclear facilities in Iran will take place in these coming autumn months, before the U.S. elections in November.”

To discuss the situation in Israel and the possibility of a military confrontation with Iran, we’re joined by Israeli journalist Gideon Levy, a columnist at the Haaretz newspaper.

The general’s message comes at a time when talk of a possible attack on Iran’s nuclear facilities grows louder in Israel. On Friday, Israel’s biggest-selling daily, Yedioth Ahronoth, published an article suggesting an Israeli attack could be imminent. The article reported, quote, “Insofar as it depends on Binyamin Netanyahu and Ehud Barak, an Israeli military strike on the nuclear facilities in Iran will take place in these coming autumn months, before the U.S. elections in November.”

PRIME MINISTER BENJAMIN NETANYAHU: [translated] I decided today to appoint lawmaker Avi Dichter as civil defense minister. He has served in the past as internal security minister. He was also head of the Shin Bet. I remember him 40 years ago when we served together in Sayeret Matkal, Israeli commando unit. He has a lot to his credit, and he will now have an important assignment, to assist in what he has been involved in all his life: contributing to state security.

NERMEEN SHAIKH: Some have suggested Avi Dichter’s appointment is intended to bolster support in the cabinet for a unilateral Israeli strike. But earlier this year, in an article posted on the Israel National News website, Dichter opposed such action. He wrote, quote, “Israel is not a superpower. We cannot lead the world offensive against Iran. We have to participate, we have to give all kinds of information and intelligence that we have. We need to prepare, just in case nobody plans to do anything, but to lead it will be a total mistake by the State of Israel.” On Tuesday, U.S. Defense Secretary Leon Panetta addressed the increasing talk of a possible Israeli attack on Iran.

DEFENSE SECRETARY LEON PANETTA: I don’t believe they made a decision as to whether or not they will—they will go in and attack Iran at this time. Obviously they’re an independent, they’re a sovereign country. They’ll ultimately make decisions based on what they think is in their national security interest. But I don’t believe they made that decision at this time. The reality is that we still think there is room to continue to negotiate. We’re just—these sanctions—the additional sanctions have been put in place. They’re beginning to have an additional impact on top of the other sanctions that have been placed there.

AMY GOODMAN: Leon Panetta, defense secretary, speaking Tuesday. Meanwhile, Martin Dempsey, the chair of the Joint Chiefs of Staff, said that Israel could not successfully carry out such an attack on its own.

AMY GOODMAN: To find out more about the situation in Israel and the possibility of a military confrontation with Iran, we’re going to go first to Tel Aviv to speak with longtime Israeli journalist Gideon Levy, columnist at the Haaretz newspaper, member of the newspaper’s editorial board. He is the author of The Punishment of Gaza.

We welcome you to Democracy Now!, Gideon. Is this different from other times? Are you sensing a serious escalation?

GIDEON LEVY: Absolutely. I mean, the Israeli escalation rhetorics might be followed with actions. I must tell you that nobody, but really nobody, knows the truth. But, you know, also the rhetoric has its own dynamics, and things can go out of control, and things can deteriorate. And I can tell you that here in Tel Aviv, more and more people start to be really, really worried, in terms of the coming weeks, not in terms of the coming months. It seems very, very dangerous.

NERMEEN SHAIKH: Gideon Levy, could you explain why it’s the case that the rhetoric is increasing at the pace it is now?

GIDEON LEVY: Look, it’s very hard to follow the rationale of the whole thing, because those threats coming from Israel had—in a certain stage, had a goal mainly to push the United States and the world to do something about Iran. But Iran is on the international agenda. It is on the table. Israel had achieved this goal. And still the rhetoric continues. And as it continues and becomes, from day to day—but really from day to day—more sharp and more threatening, I tend to believe that this might lead to an operation which might be a very, very dangerous situation for the entire region.

AMY GOODMAN: Can you talk about the response to Republican presidential candidate Mitt Romney coming to Israel and the significance of his comments, what you understood he was saying, if he was president? He had boasted that he and Benjamin Netanyahu, the Israeli prime minister, had worked at Boston [Consulting Group] together many years ago and knew each other. It seemed that Netanyahu somewhat distanced himself from him. But can you talk about what Mitt Romney actually said, talking about—and I want to just play a clip of Mitt Romney saying the U.S. would stand by its ally in a standoff with Iran.

MITT ROMNEY: We should employ any and all measures to dissuade the Iranian regime from its nuclear course, and it is our fervent hope that diplomatic and economic measures will do so. In the final analysis, of course, no option should be excluded. We recognize Israel’s right to defend itself and that it is right for America to stand with you.

GIDEON LEVY: Yeah, Romney, first of all, was welcome here in Israel as he was not welcome in any other place. And it’s very obvious that the present government in Israel, mainly the Israeli prime minister, Benjamin Netanyahu, is really willing to see Romney in the White House. But I must say that Romney was quite cautious, at least at his public expressions. And practically, if you analyze what he said, he didn’t say anything that President Obama didn’t say. Those vague promises you can hear from both candidates, from the president and from Romney. And, you know, where you stand depends on where you sit, and I’m not so sure that candidate Romney will react in the same way like a possible President Romney. I wouldn’t take it too seriously, because if he will get into the White House, which we—personally, I hope that he will not—but if he will step in, he will also have some other considerations rather than the elections. So, I wouldn’t be sure that Romney will be a guarantee for an America or Israeli attack, either.

NERMEEN SHAIKH: So how relevant do you think it is, Gideon Levy, that all of this debate is taking place just months before the elections here?

GIDEON LEVY: It seems that—at least it seems that Israel is at least trying to ignore the elections and maybe to do something before the elections. At least that’s the atmosphere, that Israel is not going to wait until the elections. It is very hard to explain. It is very hard to understand how can an Israel prime minister dare to do something in such a sensitive time. But, you know, I—well, not always Israel is very rational or very easy to explain. I hope that it’s all rhetorics. But it starts to be really suspicious because it can be that such rhetorics will end up with nothing. It’s just impossible.

NERMEEN SHAIKH: Gideon Levy, before we conclude, is it the case that it’s been reported that a majority of Israelis are opposed to any Israeli action against Iran at the moment?

GIDEON LEVY: No, it changes. The public opinion here is quite brainwashed, like in any other place, and things start changing. It depends how you ask it. There was another poll which showed that, I think, 47 percent of the Israelis are already in favor of an preparation, that over 50 percent believe that if Iran will have nuclear weapons, this means a second Holocaust for Israel. I mean, I wouldn’t go for this, because there is so much information, misinformation in the media that people are really confused and people can be shaken very, very easily. The matter of fact is that almost the entire military and defense establishment of Israel, the present one and the former one, is united in opposing an attack in this time. But still, the decision makers—mainly two, the prime minister and the defense minister, Barak—seem to be very, very devoted to do something.

AMY GOODMAN: Gideon Levy, I want to thank you very much for being with us, Haaretz columnist, member of the newspaper’s editorial board, author of The Punishment of Gaza, joining us on the phone from Tel Aviv. When we come back, we’ll speak with two people here in Washington, D.C., both about what the U.S. is doing in this escalating tension and also about Iranians’ deep concern about how to help their family members in Iran, how to send back money in the wake of two earthquakes.