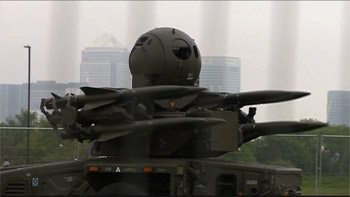 HAVANA TIMES — Britain has launched its biggest peacetime security operation ever ahead of the opening of the Summer Olympics. Nearly 20,000 armed forces personnel are now providing security — almost double the number of British troops currently serving in Afghanistan.

The Olympic Games are estimated to cost British taxpayers a staggering $17 billion.

At the same time, Brits near the Olympic Park have been subjected to sweeping censorship laws enacted by their government at the behest of the International Olympic Committee.

Meanwhile, activists are outraged that the Olympics’ long list of sponsors include companies such as Dow Chemical and BP. They say the corporations’ human rights records are at odds with the Olympic ideals of global peace and goodwill.

We go to London to speak with Jules Boykoff, a professor and author who is currently writing a book on dissent and the Olympics. He played for the U.S. Olympic soccer team in international competition from 1989-1991.

AMY GOODMAN: We turn now to the 2012 Summer Olympic Games. Over 10,000 athletes from across the world are convening at the main Olympic Park in East London. In anticipation of the Olympic Games, London has rolled out its biggest security operation since World War II. Approximately 18,200 armed forces personnel are now providing security for the Olympic Games—almost double the number of British troops currently serving in Afghanistan. Helicopters, fighter jets, bomb-disposal units are all on standby. Security officials have also acquired Starstreak and [Rapier] surface-to-air missiles. The Ministry of Defense has attached missile launchers to roofs of some London residential buildings.

MAYOR BORIS JOHNSON: Always going to have loads of military personnel anyway, so that really hasn’t changed. Plus, B, I don’t personally—I think most people in this country don’t have any objection at all to seeing venues being properly invigilated by professional military armed services people.

AMY GOODMAN: The Olympic Games are estimated to cost British taxpayers a staggering $17 billion. At the same time, Brits near the Olympic Park have been subjected to sweeping censorship laws enacted by their government at the behest of the International Olympic Committee. The laws limit the use of Olympic language and imagery to—strictly to official sponsors, such as Visa, McDonald’s, GE.

Meanwhile, activists are outraged that the Olympics’ long list of sponsors include companies like, oh, Dow Chemicals and BP. They say the corporations’ human rights records are at odds with the Olympic ideals of global peace and goodwill. Activist Satinath Sarangi explained why five organizations representing survivors of the Bhopal gas tragedy in central India are organizing a “Special Olympics” in protest of Dow Chemical’s partnership with the London Olympics.

AMY GOODMAN: Santinath Sarangi added that children affected from the Bhopal tragedy would take part in mock Olympic games such as “assisted walking” and “crab racing” as a sign of protest.

Activists are also criticizing the Olympics for its alliance with oil giant BP. The Reclaim Shakespeare Company is performing a Shakespeare-inspired skit called “BP or Not BP?” in public venues to draw critical attention to BP’s record on the environment. Several of the activists explained why they object to BP’s partnership with not just the Olympics but also the British Museum and the World Shakespeare Festival.

ACTIVIST 1: BP, is that they are exploiting the natural resources of the world, and they’re also trying to give themselves a lovely greenwash by supporting the arts and supporting the Olympics.

ACTIVIST 2: Do not believe BP’s image when they say they are now a friendly company sponsoring the arts. It’s just a way of disguising their real behavior.

ACTIVIST 3: BP are involved in ecocide on a global level.

AMY GOODMAN: And a mock awards ceremony at the Olympic clock in Trafalgar Square descended into farce after police arrested six people taking part. Three people pretending to be corporate representatives from BP, Dow and Rio Tinto were awarded gold medals for being the worst corporate sponsors of the Olympics, before having small quantities of green custard poured over their heads. The good-natured performance took about 15 minutes. It was clearly amusing to a number of passersby, until 25 police officers arrived and arrested six people, including the three corporate representatives and people who were mopping up the small amounts of custard on the ground.

Well, for more, we go to London, where we’re joined by Jules Boykoff, associate professor of political science at Pacific University, currently a visiting scholar at the University of Brighton. He was born in England since—he’s been in England since April following the build-up to the Olympics. He’s writing a book on dissent and the Olympics and played for the U.S. Olympic soccer team in international competition from 1989 to 1991. His recent piece in the New York Times is called “Olympian Arrogance.”

Jules Boykoff, welcome to Democracy Now! Well, tell us what you’re seeing there and why you titled your piece “Olympian Arrogance.”

JULES BOYKOFF: Well, what we’re seeing here are a lot of what you’ve outlined in terms of the intense militarization of the public sphere. And it really does go back to the International Olympic Committee, or the IOC. And that’s what we are getting at with “Olympian Arrogance.” If you want to understand the crass commercialism of the Games, if you want to understand the intense militarization of the Games, it makes sense to start with the IOC.

And the IOC has always been a privileged sliver of the global 1 percent. Going back to the 1890s, when it was started by Frenchman Pierre de Coubertin, he basically assembled a hodgepodge of counts and dukes and princes together to run the show. In the subsequent, basically it’s remained this basically old boys’ club. In fact, they started allowing wealthy business elites into the club. And only in 1981 did they start to allow women to be members of the IOC.

And it’s not just the composition of the IOC that some might find a little bit problematic; it’s the dictates that they impose on host cities. So, for example, right before they make the final selection for who’s going to host the next Olympics, all the candidate city finalists have to sign a document that promises that they will follow all 33 of the IOC’s technical manuals down to a letter. A lot of that has to do with brand protection, which I’ll get to in a second. But it also has to do with creating new laws in the country and the host city that conform to the principles of the IOC. So, here in London, what they did was they passed the 2006 Olympic and Paralympic Act, which did all sorts of things. You mentioned it’s illegal to use the words “2012” and, say, “medals” for commercial purposes in any form, and you can receive a 20,000-pound fine. This all goes back to the IOC and what they set up and impose on host cities.

And that’s why you’re seeing, when you look around—you said I was here since April, so I was here for the Jubilee, actually. And when the Jubilee happened for the queen, there were signs in windows, there were people celebrating, shops put little placards up and that sort of thing. Well, right now, during the Olympics, you’re really not seeing that very much, because people are afraid that they’re going to get cracked down on. Just a couple examples. A butcher put a bunch of sausages up in his window in the shape of the Olympic rings; he got asked to take them down. Somebody in Plymouth put up on their menu a “flaming torch breakfast baguette,” and they were asked to take it off the menu. A florist was—put up a little display in the front of her store in the shape of the Olympic rings; again, told to take it down or face a 20,000-pound fine. So, the IOC is really where a lot of this starts.

AMY GOODMAN: Jules Boykoff, the—talking about the various corporations, we remember in the Canada Olympics, in the Vancouver Olympics, the law passed by the local city council saying athletes couldn’t criticize the sponsors. Talk about who these sponsors are and what’s allowed to be said.

JULES BOYKOFF: Sure. Well, the sponsors are the elites of the global elite from corporate—the corporate world, so you have Coca-Cola, McDonald’s, Cadbury. These aren’t exactly the firms you might think of when you think of elite athleticism. You’ve got all of them. They started a new thing in London called “sustainability partners.” And somewhat unbelievably, one of the sustainability partners is actually BP, which you mentioned at the outset, also EDF Energy, which is a big pusher of nuclear power here in Europe.

And so, you see a lot of the commercialism playing out all across the country, in terms of what people feel like they can and can’t say. I mean, people have been on red alert and worried about protesting, in certain respects. Take, for example, the group Space Hijackers. They made themselves the official protesters of the 2012 Olympic Games. They made it into their little icon on their Twitter page. Twitter asked them—presented them with a cease-and-desist order, and cracking down and saying, “You can’t do this.” So it’s very widespread, the sort of crackdown that you’re seeing.

One other thing I want to say about this crackdown, though, who are these brand police? They are the ODA, or the Olympic Delivery Authority. The ODA is actually a public body. It’s publicly funded. And it is a public body that’s doing the bidding, basically, of these private firms. So they’re the ones—the public ODA is going around enforcing and being essentially the brand police. And this is a dynamic we kind of see over and over again, where the public pays, in the case of the Games—or the public carries out the brand policing, and then the private firms actually are there to profit.

AMY GOODMAN: During the London 2012 Olympic and Paralympic Games, BP is running this massive advertising campaign to highlight its role as one of the sponsors. Let’s go to a clip of a behind-the-scenes look at the BP ad campaign, which the corporation put on its “BP London 2012” website.

DUNCAN BLAKE: We launched our Olympic advertising in July last year, and that was all about, you know, talking about the contribution that BP was making to a successful Games. But as we get into Olympic year, in the immediate run up to the Olympics, as everyone is sort of really getting behind it and getting excited, we’re going to be celebrating all the many, many thousands of people who have been behind the scenes who have been helping to make the Games a success.

JULES BOYKOFF: Well, critics here are saying that’s just a classic greenwash. And there’s this commission that’s been set up here called Commission for a Sustainable London, which is the watchdog group to oversee the sustainability practices of the London Games. And they recently put out a report, just last month, that said that essentially there are no criteria that you have to meet to become a sustainability partner. Basically, you just pay the money, and you’re a sustainability partner. And that’s how it’s happened with BP, also BT, Cisco—

AMY GOODMAN: I think we may have just lost Jules Boykoff, associate professor of political science at Pacific University, currently visiting scholar at the University of Brighton