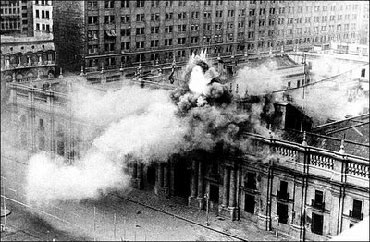 HAVANA TIMES – We continue our coverage of the 40th anniversary of the overthrow of Chilean President Salvador Allende with a look at the critical U.S. role under President Richard Nixon and his national security adviser, Henry Kissinger.

Peter Kornbluh, who spearheaded the effort to declassify more than 20,000 secret documents that revealed the role of the CIA and the White House in the Chilean coup, discusses how Nixon and Kissinger backed the Chilean military’s ouster of Allende and then offered critical support as it committed atrocities to cement its newfound rule.

Kornbluh is author of the newly updated book, “The Pinochet File: A Declassified Dossier on Atrocity and Accountability,” and director of the Chile Documentation Project at the National Security Archive. In 1970, the CIA’s deputy director of plans wrote in a secret memo: “It is firm and continuing policy that Allende be overthrown by a coup. … It is imperative that these actions be implemented clandestinely and securely so that the USG [the U.S. government] and American hand be well hidden.”

That same year President Nixon ordered the CIA to “make the economy scream” in Chile to “prevent Allende from coming to power or to unseat him.” We’re also joined by Juan Garcés, a former personal adviser to Allende who later led the successful legal effort to arrest and prosecute coup leader Augusto Pinochet.

AARON MATÉ: I wanted to ask about the U.S. role in all of this, and let’s turn to a recording of President Richard Nixon speaking in a March 1972 phone call, acknowledging he’d given instructions, quote, to “do anything short of a Dominican-type action” to keep the elected president of Chile, Salvador Allende, from assuming office. The phone conversation was captured by his secret Oval Office taping system. In this clip, you hear President Nixon telling his press secretary, Ron Ziegler, he had given orders to undermine Chilean democracy to the U.S. ambassador, but, quote, “he just failed. … He should have kept Allende from getting in.” Listen closely.

PRESIDENT RICHARD NIXON: What did you—have you said anything, Ron, with regard to the ITT in Chile? How did you handle—

RON ZIEGLER: The State Department dealt with that today.

PRESIDENT RICHARD NIXON: Oh, they did?

PRESIDENT RICHARD NIXON: What did they do? Deny it?

RON ZIEGLER: They denied it, but they were cautious on how they dealt with the Korry statement, because they were afraid that might backfire.

PRESIDENT RICHARD NIXON: Why? What did Korry say?

RON ZIEGLER: Well, Korry said that he had received instructions to do anything short of a Dominican-type—alleged to have said that.

PRESIDENT RICHARD NIXON: So how did—how did that go? He put that out?

RON ZIEGLER: Well, Anderson received that from some source. Al Haig is sitting with me now.

RON ZIEGLER: It was a report contained in an IT&T—

PRESIDENT RICHARD NIXON: Well, he was. He was instructed to.

PRESIDENT RICHARD NIXON: I hoped—but he just failed, the son of a [bleep]. That’s his main problem. He should have kept Allende from getting in. Well—

RON ZIEGLER: In any event, State has denied—

RON ZIEGLER: —it today, and they referred to—to your comments about Latin America and Chile and—

RON ZIEGLER: —and so, you just refer to that on that one.

AARON MATÉ: That’s President Nixon speaking in 1972. Peter Kornbluh of the National Security Archive, can explain to us what Nixon is talking about here, and put it in context of the U.S. role in destabilizing Chile?

PETER KORNBLUH: Richard Nixon and Henry Kissinger launched a preemptive strike against Salvador Allende. They decided to stop him from being inaugurated as president of Chile. He hadn’t even set foot in the Moneda Palace, when Nixon and Kissinger just simply decided to change the fate of Chile. Nixon instructed the CIA to make the Chilean economy scream, to use as many men as possible. The first plan was to actually keep Allende from being inaugurated as president. And then, when that plan failed, after the assassination of the Chilean commander-in-chief that the United States was behind, General René Schneider, Kissinger then went to Nixon and said, “Allende is now president. The State Department thinks we can coexist with him, but I want you to make sure you tell everybody in the U.S. government that we cannot, that we cannot let him succeed, because he has legitimacy. He is democratically elected. And suppose other governments decide to follow in his footstep, like a government like Italy? What are we going to do then? What are we going to say when other countries start to democratically elect other Salvador Allendes? We will—the world balance of power will change,” he wrote to Nixon in a secret document, “and our interests in it will be changed fundamentally.”

AMY GOODMAN: Talk about Kissinger’s role. Most recently, people may have seen Stephen Colbert dancing around him, the—Henry Kissinger, of course, still alive, considered an elder statesmen by most of the press in the United States. Give us a thumbnail sketch of his role.

PETER KORNBLUH: I just got back from Chile, and I did a number of TV shows there, and everybody said, “We’re trying to hold our own people accountable here for the atrocities that took place during the Pinochet regime, but why isn’t Henry Kissinger being held accountable? Why isn’t the United States held accountable for the role that they played in the atrocities that were committed in Chile, starting with the coup itself and then going on with the repression that followed?” And Kissinger really is the—not only the key survivor of the policy-making team of that era, but truly when you go through the declassified documents that are laid out in the book, The Pinochet File, you see that he is the singular most important figure in engineering a policy to overthrow Allende and then, even more, to embrace Pinochet and the human rights violations that followed.

He had aides who were saying to him, “It’s unbecoming for the United States to intervene in a country where we are not—our national security interests are not threatened.” And he pushed them away. “Nope, we can’t—we can’t let this imitative phenomena—we have to stop Allende from being successful.” He had aides that came to him the day after the coup and said, “I’m getting reports that there’s 10,000 bodies in the streets. People are being slaughtered.” And he said, “Go tell Congress that this new military regime is better for our interests than the old government in Chile.” And we have this fabulous document of him talking to Pinochet, a meeting in 1976, in which his aides have told him, “You should tell Pinochet to stop violating human rights.” And instead he says to Pinochet, “You did a great service to the West in overthrowing Allende. We want to support you, not hurt you.”

AMY GOODMAN: In The Pinochet File, you quote an assessment by the CIA’s directorate of operations, who advised President Nixon and Henry Kissinger on covert action in Chile. He argued that far from being a pawn of the communists, Allende would, quote, “be hard for the Communist Party and for Moscow to control.” He also said covert operations to stop Allende from becoming president would be, quote, “worse than useless. Any indication that we are behind a legal mickey mouse or some hardnosed play exacerbate relations even further. … I am afraid we will be repeating the errors we made in 1959 and 1960 when we drove Fidel Castro into the Soviet camp.” You also quote Kissinger’s top aide on Latin America, Viron Vaky, who wrote in a top-secret cable, “it is far from given that wisdom would call for covert action programs; the consequences could be disastrous. The cost-benefit-risk ratio is not favorable.” Peter Kornbluh?

PETER KORNBLUH: That’s my point. There were people inside the U.S. government pressing Kissinger not to take this course, and he completely shunted them aside, pushed Nixon forward to as aggressive but covert a policy as possible to make Allende fail, to destabilize Allende’s ability to govern, to create what Kissinger called a coup climate.

In the new edition of The Pinochet File, we have the actual transcript of Nixon and Kissinger’s conversation, their first phone conversation after the coup took place, in which Nixon says to Kissinger, “Well, our hand doesn’t show in this one, does it?” And Kissinger said, “We didn’t do it,” referring to direct participation in the coup. “We helped them.” He says, “I mean, we helped them. [Blank],” which I am sure is a reference to the CIA, “created the conditions as best as possible.” And this is the first conversation between Nixon and Kissinger after the coup. They’re basically laying out the role of the United States and setting—creating a coup climate in Chile, facilitating the coup.

What’s even worse—this was long before your program existed, but Richard Nixon is already complaining about the liberal crap in the media, and Kissinger says, “Yeah, the liberal—the media is bleeding because a communist government was overthrown,” you know, like as if the media is on the side of Allende. They’re focusing on the atrocities that are taking place. And Kissinger says, “In the Eisenhower period, we would be heroes.”

AMY GOODMAN: In this last minute, Juan Garcés, it is interesting, though you experienced the intensity of what happened 40 years ago with Salvador Allende ultimately killing himself in the palace as the bombs rained down, you are focused on today and what is happening today—you brought Pinochet to justice. You had Baltasar Garzón, through the famous Spanish judge, issue an arrest warrant for him when he took a visit to London, and he was held there, although ultimately sent back to Chile. What lesson can we learn, in these last 25 seconds? And we’ll continue the conversation after the show.

JUAN GARCÉS: A matter of how do you understand the world. Should you go through peaceful means or using bombs and invasions? The law is very clear. Since ’40, ’45, 1945, the United Nations Charter, after a big World War—World War—decided that the sovereignty and independence of the countries should be respected and that all the nations should fight to avoid genocidal policies.

AMY GOODMAN: We have to leave it there, but part two we’ll post at democracynow.org. Juan Garcés, Spanish lawyer, ex-aide to Salvador Allende, and Peter Kornbluh. The latest book, The Pinochet File.