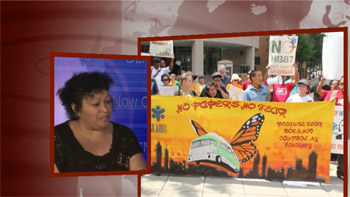 HAVANA TIMES — A busload of more than 40 undocumented immigrants and their supporters known as the Undocubus has arrived in Charlotte after traveling more than 2,000 miles, through 11 states, to deliver a message to President Barack Obama and the Democrats under the slogan of “No Papers, No Fear.”

In many of the 15 cities they visited on their way to Charlotte, they engaged in civil disobedience to protest their criminalization by state and federal immigration laws. We’re joined by two of the riders, Leticia Ramirez and Rosi Carrasco.

AMY GOODMAN: Music from the protests here at the Democratic National Convention just before it began on Sunday. About 1,500 people marched here in Charlotte, North Carolina. This is Democracy Now!, democracynow.org, “Breaking With Convention: War, Peace and the Presidency.” We’re covering the Democratic National Convention, as we did the Republican convention, inside and out. I’m Amy Goodman.

Today delegates are set to officially adopt the Democrats’ 2012 platform, which states they’re, quote, “strongly committed to enacting comprehensive immigration reform.” The overhaul would include requiring undocumented immigrants to, quote, “get right with the law, learn English and pay taxes,” in order to get on a path toward citizenship.

Meanwhile, a busload of more than 40 undocumented immigrants and their supporters, known as the UndocuBus, has arrived here in Charlotte after traveling more than 2,000 miles through 11 states to deliver a message to President Obama. This is bus rider Gabriela Alcazar.

GABRIELA ALCAZAR: Message to him is to stop the criminalization of our people. He came in as a president that was not only going to fight for immigration reform, but that was with our people. And it turns out he’s deported way more people than even Bush in his whole entire term. So, he has the power. We saw, with the deferred action for DREAMers, he has the power to make changes, and we’re here to demand that he do that. We’re not here saying that we’re not going to vote for him or that we’re going to vote for Mitt Romney. The Republicans have already chosen a side. We know where they stand. And we want the Democrats to do—to pick a side. What side of history are they going to be on?

AMY GOODMAN: UndocuBus rider Gabriela Alcazar. Her fellow undocumented riders range in age from 18 to 65. Their slogan: “No Papers, No Fear.” In many of the 15 cities they visited on their way to Charlotte, they engaged in civil disobedience to protest their criminalization by state and federal immigration laws.

Well, for more, we’re joined by two of the riders on the bus. Leticia Ramirez got on the bus in Phoenix, Arizona, where she’s a member of the Puente Human Rights Movement. The day before, she and three fellow undocumented immigrants were arrested outside the trial of Sheriff Joe Arpaio, known for his raids on Latino communities. Leticia came to the United States with her family when she was nine years old, now has three U.S. citizen children. We’re also joined by another bus rider, Rosi Carrasco. Originally from Mexico, she has lived in Chicago for the past 18 years, came as an undocumented immigrant after her daughters did so first. They’re also on the bus.

We welcome you both to Democracy Now!

AMY GOODMAN: Let us start with Leticia. Talk about the UndocuBus and what you’re trying to do here.

LETICIA RAMIREZ: What we’re trying to do is to teach the community how to defend themselves against all these laws that are trying to attack the community and trying to attack the Latino community. We know and we have known a lot of families have been deported because of these laws, that they’re trying to tell us that we are criminals. And that’s what we want to tell the Democrats, that we are not criminals. We’re just human beings that just want to come and work. We want to support the state and then have a decent life. And—

AMY GOODMAN: What happened the day before you got on the bus in Phoenix?

LETICIA RAMIREZ: It was Arpaio’s trial. We sat on the street. We told Arpaio that we were undocumented and unafraid. That was the first time that I came out of the shadows, because I think it was—it was time for me to tell the world that I’m not afraid anymore, that I want to defend my community, and I’m proud to be undocumented. I’m not ashamed, because that’s what we need, to the community be together and to have that unity.

AMY GOODMAN: Were you concerned, if you were arrested, you would be deported? Where is your family originally from?

AMY GOODMAN: And were you concerned you would be deported?

LETICIA RAMIREZ: I wasn’t concerned, because I know that I have my community that was supporting me. I have a lot of people that were giving me—what do call it—hope that they were going to help me in case if something happens. And the thing that we’re doing in Arizona is that we are—we know our rights. That’s what I’ve been in this movement for three years, and that’s why I wanted the community to know. If you know your rights, you know English, that’s more hope that you won’t get deported, if you have—like I have three kids, and I’ve been here for—I’ve been here—I’ve been living in Arizona for 18 years.

AMY GOODMAN: I want to turn to Governor Romney. During the Republican primary debate in January, he was asked, if he would not deport immigrants, how would he send them home? This was Mitt Romney’s response.

MITT ROMNEY: The answer is self-deportation, which is people decide that they can do better by going home because they can’t find work here, because they don’t have legal documentation to allow them to work here. And so, we’re not going to round people up. The way that we have in this society is to say, look, people who have come here illegally would, under my plan, be given a transition period and the opportunity during that transition period to work here, but when that transition period was over, they would no longer have the documentation to allow them to work in this country. At that point, they can decide whether to remain or whether to return home and to apply for legal residency in the United States, get in line with everybody else.

ROSI CARRASCO: You know, we know that Mitt Romney and the Republicans already took the decision about immigration, and that’s why we are here now with the Democrats. We know that we have been traveling for six weeks out there in the country, and we have encountered families that are suffering these policies of deportation. And since we know that the Republicans already have decided what to do, that’s why we have decided to come here and to bring our message to President Obama. I think that they are the ones that have to decide which side of the history they are going to be. So, for us, it’s important to bring the message to President Obama.

AMY GOODMAN: Talk about, Rosi, what the action is you’re planning to do today.

ROSI CARRASCO: Well, you know, two years ago, the undocumented youth started these actions called “coming out of the shadows.” And they decided that they will no longer be afraid, and they will say publicly that they are undocumented. Two years ago, my daughters were part of this movement, and they—my two daughters have been part of the civil disobedience actions. And I have learned from them that it’s important to be organized. Because of that, I think that it’s time for us, as parents and as community members, to do this, to follow their example. I know that there’s changes in the immigration policy because of the courage of these youth. And we are traveling together, youth and parents, workers. We are traveling together because we know that the only way to continuing pushing for change is working together, telling people that we are no longer afraid, that we are organized, and that we will continuing organize ourselves.

AMY GOODMAN: And so, this action that you’re going to do today?

ROSI CARRASCO: Well, today, we have decided to do an action because—because we found families that are in deportation procedures, because we have been doing everything we can. We march. We have been doing lobbying. We have been talking to politicians. And now we realize that we have to put ourselves in the line. So we have taken the decisions that we will be part of an action, a peaceful civil disobedience action at the doors of the Democratic National Convention. And what we want to say to the President Obama is, which side of the history he’s going to be? Is he going to be remembered as the president that has been deporting most people in the U.S. history, or he is going to be on the side of immigrants, respecting our right to organize ourselves? You know, we know that if we are detained by the sheriff, it’s up to the sheriff to turn us in to immigration. And it will be up to the immigration to start the deportation proceedings. But we wouldn’t be in this line, if not for the policies of immigration. So, for us, that’s important.

AMY GOODMAN: Leticia, as we wrap up, I hear Sheriff Arpaio may be in Charlotte on Wednesday. What are your thoughts about that? And why weren’t you protesting in Tampa, as well?

LETICIA RAMIREZ: Because I think that it’s important to be here in Charlotte with the Democrats, because, like Rosi said, we want Obama to decide on what side is he in, because if he did something for the students, the community is waiting for him to do something for the community. A lot of families have been separated because of the deportation that he’s been doing. So we want him to decide if he wants to be with the community or he wants to be deporting more people every day. And if Arpaio comes here, we’ll have to do something about it. And Arpaio knows that the community in Arizona is not going to—is not going to stop its fight against him, and we’re going to continue fighting until he’s out of the sheriff’s office.

AMY GOODMAN: Well, I want to thank you both so much for being with us. Leticia Ramirez and Rosi, thank you so much. “No Papers, No Fear” tour is the tour that they have been on. That does it for our broadcast. If you’d like to check both hours of our two-hour daily broadcast, “Breaking With Convention,” go to our website at democracynow.org. Rosi Carrasco, thanks so much, as well.