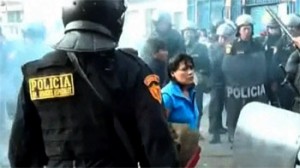 HAVANA TIMES — The Peruvian government has declared a state of emergency in the mountain region of Cajamarca where thousands have gathered in recent days to protest the expansion of a gold mine owned by the U.S.-based Newmont Mining that is already the largest in South America.

We speak to journalist Bill Weinberg, who was recently in Cajamarca. “Every time the company, Yanacocha, proposes an expansion of the mine, the local people there get organized, and they block the roads, and they shut down the businesses,” Weinberg says.

JUAN GONZÁLEZ: This is Democracy Now!, democracynow.org, The War and Peace Report. I’m Juan González. We’re still having trouble getting to Clara Gutteridge, so we’re going to move now to Peru, where the government has declared a state of emergency in the mountain region of Cajamarca. Thousands gathered in recent days to protest the expansion of a gold mine owned by the U.S.-based Newmont Mining company. The mine is already the largest in South America. Using live ammunition against the protesters, police killed five people this week alone.

On Wednesday, in a dramatic video broadcast nationally on Peruvian television, police severely beat a former Roman Catholic priest who had rallied protesters despite emergency measures restricting freedom of assembly. The video shows police walking up to the protest leader, Marco Arana, as he sat on a bench in the central square of the region’s capital city. They surround him and hit him with batons and then arrest him. Arana later tweeted that, quote, “in the police station they hit me again, punches in the face, kidneys, insults.” At a news conference, Arana blamed Peru’s president, Ollanta Humala, of being behind the violence.

MARCO ARANA: [translated] The government is mistaken if it thinks that it is going to crush the justified cries of the people of Cajamarca with bullets, torture or beatings. We have to say clearly to President Humala, the interior minister, the defense minister and the prime minister, like the gospel says, do not fear those who kill the body, fear those who kill the soul.

JUAN GONZÁLEZ: When President Humala ran for office in 2011, he promised to stop the $5 billion expansion of the Yanacocha gold mine, which is about 20 miles north of the major city of Cajamarca in the Peruvian Andes. The new mine, just a few miles away, would extend into a pristine landscape of wetlands, lakes and streams that are the region’s water source. President Humala now openly supports the mine’s expansion in one of the country’s poorest regions. He recently said, quote, “There are dams and roads that have to be built. It is not fair to Cajamarca after having given so much to the country.”

Well, for more on this situation, which continues to escalate, we’re joined here in New York by Bill Weinberg, a freelance journalist who was recently in Cajamarca reporting for The Progressive magazine. He’s also the editor of the World War 4 Report.

JUAN GONZÁLEZ: Tell me—you’ve just gotten back. This protest, how has it been growing for the last number of weeks there?

BILL WEINBERG: Well, they started a general strike on May 31st. This is just the latest in a whole series of ongoing protests, really which have been going on for years in the region. Every time the company, Yanacocha, proposes an expansion of the mine, the local people there get organized, and they block the roads, and they shut down the businesses. And it most significantly started to heat up last year when they proposed moving into this area called Conga, where there are five alpine lakes which the company proposes to destroy. They’re going to turn them into giant mining pits and dumps for the mine waste. And the water sources in the region have already been diminished, largely due to the—it appears, due to the mining operations already, which have been tearing the mountains of the watersheds into giant pits. And the people said, “Enough is enough,” and launched this campaign. And there’s been sort of a back-and-forth where they’ve been attempting to negotiate with the government. But finally, things broke down, and on May 31st they launched what they call an indefinite general strike.

JUAN GONZÁLEZ: And now the miners in South America, especially in Peru and Bolivia, have always been some of the most active, radical of the trade unions. What’s been the relationship between the communities and the miners, who—the workers in these mines?

BILL WEINBERG: Unfortunately, extremely divided. And most of the workers in the mines are in fact people from the local communities—not all of them, but a big—a large deal of them. So, unfortunately, you’ve got a situation where the villages, which have got a lot of people who work in the mines, tend to support the project, and that majority of the villages, which are more concerned with keeping their agricultural way of life alive, oppose the project. So, unfortunately, it’s really divided the local community.

JUAN GONZÁLEZ: And the impact of the beating of this priest, the video that was caught, in terms of the—across the nation? What was the aftermath of the broadcasting of that video?

BILL WEINBERG: Well, it’s just been one more outrage in a long string of outrages. Marco Arana is one of the key leaders of the movement. He’s got a political organization called Tierra y Libertad and—Land and Freedom—and just the day before he was arrested, he had issued a statement saying that the only way that the Conga project could be imposed in Cajamarca was through a bloodbath.

But it’s not just him. I mean, in fact, the—just a few days before that, Gregorio Santos, who is the regional president of Cajamarca, equivalent to a government—a governor, more or less, had—an investigation had been opened into him by the national authorities on charges that he was plotting to, quote-unquote, “overthrow” the government. This had to do with a speech that he gave at a rally, where he sort of rhetorically asked the crowd, in reference to President Ollanta Humala, “What happens to presidents who break their vows?” And the crowd responded, “They’re removed.” And in response to this incident, the national authorities, judicial authorities, have opened an investigation into him. And, in fact, he was already—he and Marco Arana and several other of the protest leaders have already been facing an investigation for—since March, when I was down there, it was opened, in fact—about blocking highways and that sort of thing in relation to the protests which have already been going on. So the regional government of Cajamarca is itself completely in support of the movement against the expansion of the mine.

JUAN GONZÁLEZ: And what about this turnaround of the president? He was one of a string of Latin American presidents elected in the last decade—

JUAN GONZÁLEZ: —as a nationalist, as someone who was going to oppose foreign exploitation. And yet, now he is turning around and supporting an American company expansion of one of the biggest mines in the country.

BILL WEINBERG: Yeah, well, the people feel extremely betrayed about this. There was a cabinet purge last year—I believe it was in November—which is sort of seen as the turning point, where all of the sort of left-wing, populist-type people who were in his cabinet were given the sack, and the more conservative and pro-corporate elements took over. And one of the people who was sacked was the environment minister, a man by the name of Ricardo Giesecke, who, just days before the cabinet purge, had said, “Well, you know, we should reexamine the environmental impact statement for the Conga project,” which had been approved under the previous administration of Alan García, which is the administration which had entered into the free trade agreement with Washington and generally had been perceived as extremely pro-business, opened up vast areas of the country to the mining and oil industries, and whom, ironically, Ollanta Humala had run against from a more nationalist and populist platform.

JUAN GONZÁLEZ: And tell us something about Newmont, the company at the center of all of this, its holdings there and as well as around the world.

BILL WEINBERG: Well, it’s a 51 percent stakeholder in the Yanacocha mine, along with Peruvian partners, and 5 percent is owned by the World Bank. And they also have holdings all over the world. And, in fact, recently, they said that if they aren’t going to be able to move ahead with the project in Peru, they’re quite ready to pursue other opportunities both in the United States in Nevada as well as in Indonesia and in other countries around the world. So they’re sort of holding this out as a threat, that they’ve got plenty of other balls in play, so to speak, in various countries around the world.

JUAN GONZÁLEZ: And their record, whether it’s environmentally or in terms of labor relations, is it unusual for a mining company or pretty much pro forma for the extracting industries?

BILL WEINBERG: Well, I don’t know if I can say that it’s unusual, per se, but certainly the record in Yanacocha, in the mine in question in the mountains of Cajamarca in Peru, has been extremely problematic, at best. There’s been a lot of—you know, water sources that have gone dry, as we’ve said. There was a terrible spill of mercury, which contaminated local water sources several years ago. And, you know, a lot of the mountains in the region have been turned into giant mining pits. And communities have started to see their water disappear.

JUAN GONZÁLEZ: Well, Bill Weinberg, I want to thank you for joining us, a freelance journalist who was recently in Cajamarca reporting for The Progressive magazine. This is Democracy Now!, democracynow.org. I’m Juan González.