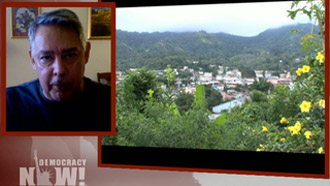 HAVANA TIMES – For the first time in Puerto Rico’s history, a majority of the island’s voters have supported a non-binding referendum to become a full U.S. state. The measure will require approval from the U.S. Congress, but President Obama has said he will respect the vote.

Obama made the same promise last year when he visited the island, becoming the first sitting U.S. president in half a century to do so. If Puerto Rico becomes the 51st state, its residents will have the right to vote in all U.S. elections, but will also have to start to pay federal taxes. We speak to Juan González, Democracy Now! co-host and New York Daily News columnist.

AMY GOODMAN: Democracy Now! co-host Juan González is home, recuperating from back surgery. Juan, I wanted to ask you about Puerto Rico. For the first time in Puerto Rico’s history, a majority of the island’s voters supported a non-binding referendum to become a full U.S. state, the measure requiring approval from the U.S. Congress, but President Obama has said he will respect the vote. He made the same promise last year when he visited the island, become the first sitting U.S. president in half a century to do so.

PRESIDENT BARACK OBAMA: Because when I ran for president, I promised to include Puerto Rico, not just on my itinerary, but also in my vision of where our country needs to go. And I’m proud to say that we’ve kept that promise, too. First of all, we’ve addressed the question of political status. In March, a report from our Presidential Task Force on Puerto Rican Status provided a meaningful way forward on this question, so that the residents of the island can determine their own future. And when the people of Puerto Rico make a clear decision, my administration will stand by you.

AMY GOODMAN: That was President Obama speaking in Puerto Rico last year. Juan González, talk about the significance of the vote that took place and what President Obama has said about respecting the vote.

JUAN GONZÁLEZ: Well, I think that the significance is that Puerto Rico is still grappling with its status as a—as the last major colony of the United States, but—and this referendum is just another step along the road, but it’s not quite as clear-cut as the press reports are making it out to be. You know, Puerto Rico has a very convoluted relationship politically with the United States, and so the parties there operate a little differently.

But the results here on the referendum are double-edged. On the one hand, the referendum was in two stages this time. This was not authorized by Congress. This is, in essence, a preference vote of the people of Puerto Rico, sending a message to Congress, but Congress has no responsibility to abide by it in any way. The first part of the amendment said, “Are you satisfied with the current status, or do you want a change in status?” And in that part of the—in that part, the change—those who wanted the change won decisively, and 900,000 people, about 54 percent of those who were voting, said that they wanted a—they were not satisfied with the current status.

AMY GOODMAN: Finally, Juan, as you look at what’s happening in this country right now, what was galvanized by the protests of years ago, the mass May Day protests; then the young DREAMers sitting in in President Obama’s campaign offices and other senators’ and Congress members’; the UndocuBus that went to the Democratic National Convention, where people also got arrested demanding a fair, rational, comprehensive immigration policy—what do you think will happen now? There is supposedly a lot of soul searching within the Republican Party at this moment, because they were so roundly beaten. What is the shape of policy that you see? What are the issues that must be hit to make it a comprehensive, satisfactory policy in this country?

JUAN GONZÁLEZ: Well, I think what you’re seeing is—and I’m glad you mentioned the 2006 protests, because I said back then that that was the coming of age of the Latino community in the United States, that series of protests in the spring of 2006. And I’m willing to bet a month’s pay that in every one of these elections at the local level across the country this week, the young Latinos who were involved in organizing for these political campaigns, that many of them were participants in those protests and were really inspired, many, to get into political activity as a result of the immigrant rights protests of 2006, and the frustration that they have felt now as six years have passed and nothing has changed in immigration.

So I think that the key thing that is—hopefully, will come of this new coalition is not only a coalition of people of the [inaudible], those who were in the past, whether they were poor or union workers or women or African Americans, Latinos, Asians, that they—that not only have they now twice elected a president, but now that the policies that the new government, that our new administration and the Congress adopt, speak to those people and provide some of the basic needs and end the gap in—growing gap in income inequality, end the constant favoritism of government for the needs and interests of the corporations and the wealthy contributors. That’s going to be the big challenge. Will Obama, who moved to the left once again to get re-elected—what is he going to do now that he’s in the position of another four years?

AMY GOODMAN: Juan González, I want to thank you so much for being with us. And I also want to encourage folks, if you’ve ever been through what Juan is going through, back surgery with a herniated disc and a pinched nerve, send us what was most successful in helping you ease the pain at [email protected] That’s [email protected] Award-winning journalist Juan González, co-host of Democracy Now!, usually right here in the Democracy Now! studios, now recuperating from back surgery. Juan, thanks so much. Among Juan’s books, Harvest of Empire, and the film has just come out based on his book, called Harvest of Empire: The Untold Story of Latinos in America. We wish you well, Juan. I hope to see you here next week.