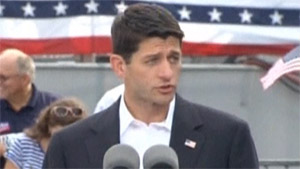 Planned Parenthood has also criticized his endorsement of a so-called “Personhood Amendment,” which supports defining a fertilized egg as a human being.

Ryan was a co-sponsor of the Sanctity of Human Life Act, which even the conservative state of Mississippi rejected last November, and is in favor of defunding Planned Parenthood.

Ryan wants to dismantle Medicaid and repeal Obama’s Affordable Care Act. “For Congressman Ryan to think he’s the one that should be making the decision to take healthcare options away from women, that’s very troubling to us,” says our guest Nicole Safar, public policy director for Planned Parenthood Advocates of Wisconsin.

AMY GOODMAN: We continue our coverage of Mitt Romney’s newly announced vice-presidential running mate, Congressmember Paul Ryan. Falling on the far-right spectrum of his own Republican Party, Ryan opposes abortion in all situations, including cases of rape and incest. He also opposes abortion in cases that endanger an expectant mother’s health. Barbara Lyons, executive director of Wisconsin Right to Life, said, quote, “Ryan has been a wonderful friend to our organization and our great cause in defense of human life throughout his brilliant tenure as a public official.”

Meanwhile, Planned Parenthood is criticizing Ryan on not only his extreme stance on abortion but also his endorsement of a so-called “Personhood Amendment,” which supports defining a fertilized egg as a human being. Ryan was a co-sponsor of the Sanctity of Human Life Act, which even the conservative state of Mississippi rejected last November. The consequences of such an amendment passing are unclear, but many infer it would make infertility treatments and birth control possibly illegal and would all but certainly equate abortion with homicide. Supporters of the measure hope to use it to mount a legal attack on Roe v. Wade, the 1973 U.S. Supreme Court decision that established the right to abortion. Congressmember Ryan is also in favor of defunding Planned Parenthood, dismantling Medicaid, repealing Obama’s Affordable Care Act, as is of course Mitt Romney.

For more, we go now to Madison, Wisconsin, where we’re joined by Nicole Safar. She’s the public policy director for Planned Parenthood Advocates of Wisconsin.

Nicole, welcome to Democracy Now! Talk about Paul Ryan. In your state, in Wisconsin, what has been his record on women’s reproductive rights?

NICOLE SAFAR: Well, thanks so much, Amy, for giving us this opportunity to really share with the rest of the country and the rest of the world a little bit about what we know about Congressman Paul Ryan. He has certainly shown himself to be one of the most extreme members of the Republican Party on women’s health. I think you outlined it very well. He is—he wants to make abortion illegal in all cases. He has signed onto the personhood bill, which we’re very concerned will have implications for in vitro fertilization, for different kinds of birth control. It’s just a very extreme measure that has been defeated in Mississippi, one of the most conservative states in the country. And this is something that Congressman Ryan thinks is good public policy for the country. So, that’s troubling right there. And, of course, you know, he—

AMY GOODMAN: Nicole, before we go on—

AMY GOODMAN: I wanted to ask you about this issue of opposing abortion in all cases. Explain exactly what that means.

NICOLE SAFAR: So, that means that abortion becomes illegal, it becomes a crime, and there aren’t places where women can get safe and legal abortion procedures. And that means if you are a victim of rape or incest, you don’t have access to this. If you have health concerns—it really is putting, you know, women’s health in a very dangerous position. Pregnancy can be a very wonderful time for women, but it also can be a very scary and trying time on women’s health. And for them to—for Congressman Ryan to think he’s the one that should be making the decision to take healthcare options away from women, that’s very troubling to us.

AMY GOODMAN: Earlier this year, Congressman Ryan told David Gregory on Meet the Press that he wasn’t concerned about Republicans overplaying their hand on the issue of contraception and women’s health. He suggested the government requiring employers to pay for birth control would violate people’s freedom of religion. I want to go to that clip.

REP. PAUL RYAN: What we’re getting from the White House with this conscience issue, it’s not an issue about contraception. It’s an issue that reveals a political philosophy that the president is showing that basically treats our constitutional rights as if they’re revocable privileges from our government, not inalienable rights by our creator. And so what I would simply say is, we’re seeing this new government activism, sort of a paternalistic, arrogant political philosophy that puts new government-granted rights in the way of our constitutional rights. And so, what I think it really is, is it’s an argument for freedom, for our founding principles, and for protecting those constitutional rights, which right now with this new mandate from HHS, like I said, it’s really not about contraception, it’s about violating our First Amendment rights to religious freedom and of conscience.

NICOLE SAFAR: Right. I mean, it’s a really interesting philosophy of government, isn’t it? I think that we—it is so out of touch with what we see on the ground every day, with what women know every day to be the real issue. And it is about getting access to birth control. It really is. Women struggle every day to get access to basic healthcare, healthcare like what we provide at Planned Parenthood. And the Affordable Care Act has removed so many barriers for women when it comes to this basic preventative healthcare, like well woman exams and birth control. I think that, you know, Congressman Ryan frames it in this very unique way because he knows that it’s so out of touch. He knows that his position is so out of touch from what the women across this country really understand.

AMY GOODMAN: This is an ad approved by the Obama administration that features a series of women talking about Romney’s plans to defund Planned Parenthood.

DAWN: I think Mitt Romney is really out of touch with the average woman’s health issues.

ALICE: This is not the 1950s. Contraception is so important to women. It’s about a woman being able to make decisions.

DAWN: I don’t remember anyone as extreme as Romney.

ALICE: I don’t think Mitt Romney can even understand the mindset of someone who has to go to Planned Parenthood.

MITT ROMNEY: Planned Parenthood, we’re going to get rid of that.

AMY GOODMAN: That was the ad against Mitt Romney that was approved by the Obama campaign. Interestingly, Mitt Romney once supported Planned Parenthood, as his wife Ann did, as his mother did, but now says he is opposed. But you have Congressmember Ryan, who has been opposed throughout his career.

AMY GOODMAN: And also, interestingly, Obama, just before this announcement, had this big event in Colorado, where he was introduced by Sandra Fluke, who was the young law student at Georgetown who became the target of Rush Limbaugh’s ire as she tried to speak before Congress on the importance of contraception being funded in college clinics. Nicole?

NICOLE SAFAR: Right. I mean, I think you see a very different vision for women’s role in society, women’s role in our country, when you look at President Obama and everything that he has done to help women get access to better healthcare, to, you know, more affordable healthcare, and when you look at Governor Romney and Congressman Ryan and their ideas, which are very, you know, a hundred years ago. This is not the future that women see for themselves in America. And I think it is a
very stark choice between the two sides.

AMY GOODMAN: Can you talk more about what is called the Sanctity of Human Life Act, what others call the “Personhood Amendment,” what exactly it means, saying a “fertilized egg shall have all” — this is in quotes — “shall have all the legal and constitutional attributes and privileges of personhood”?

NICOLE SAFAR: Right. Well, I mean, I think, again, the first thing that it does is it makes all abortion in this country illegal, so that means women don’t have the option. Even if a woman will die, even if her health is deeply at risk, she no longer will be able to get the medical care she needs to protect herself. It is—it’s consequences on hormonal birth control and the implanted and IUD birth control, we don’t know. We don’t know how the courts would read it to affect some of those basic prevention methods. And then in vitro fertilization, you know, that’s a whole—a whole ’nother area where women and families are trying to have children and are trying to have healthy pregnancies, and here is the government saying, “Oh, no, I think we know better than you do when it comes to you and your family.”

AMY GOODMAN: Finally, Nicole, talk about what happened in Wisconsin in April, the bombing of the clinic in Wisconsin.

NICOLE SAFAR: We did have an act of violence directed at one of our health centers this spring. And, you know, it kind of brings to light the really—the reality of the environment that women have to sometimes go through to get access to basic healthcare. It shouldn’t be this way. Women’s health should not be politicized. We shouldn’t have to be—it shouldn’t be used as a political football, really, when, you know, Republicans are trying to stir up their base. And that’s exactly—probably the only time we’ll see Paul Ryan and Mitt Romney talk about these issues, is when they are in a crowd of conservative followers. We won’t see them talk about their opposition to birth control and abortion when they’re in the mainstream media. And I think that’s why it’s really important for us to talk about these issues and really lift them up so everyone knows exactly what you’re getting into with a Romney-Ryan vision for America.

AMY GOODMAN: Nicole Safar, I want to thank you for being with us, public policy director of Planned Parenthood Advocates of Wisconsin, speaking to us from Madison.