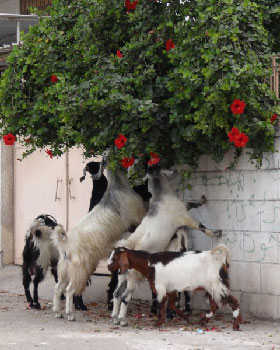 HAVANA TIMES — Welcome to this Week in Palestine, a service of the International Middle East Media Center, www.imemc.org, for June 1st to the 7th 2013

A Palestinian academic assigned to form a new Palestinian cabinet, meanwhile, 70 Israeli military incursions into Palestinian communities in the West Bank and the Gaza Strip has been reported this week, these stories and more read on.

Let’s begin our weekly report as usual with the nonviolent activities organized in the West Bank. This week protests against the wall and settlements were marking the 46 anniversary Israeli occupation of Jerusalem.

Protests were organized on Friday in occupied East Jerusalem in addition to the village of Kufer Qadoum in northern West Bank, the villages of al Nabi Saleh, Bil’in, Nil’in, central West Bank, and Al Ma’ssara village in southern west Bank.

In Jerusalem, hundreds gathered near the Damascus Gate, just outside the old city. Protesters carried Palestinian flags, and banners demanding an end to the Israeli occupation that started in 1967.

Israeli soldiers were heavily deployed around Jerusalem old city. Local sources reported that Israeli troops tried to provoke the protesters but all their attempts failed.

Elsewhere, Israeli soldiers used tear gas and sound bombs as well as chemical water to attack the weekly anti wall and settlements protests at villages of Bil’in and Ni’lin, and the nearby al Nabi Saleh.

In Bil’in and Ni’lin, Israeli soldiers attacked the protesters as soon as they reached the gate of the wall that separates local farmers from their lands. Many were treated for the effects of tear gas inhalation.

Many residents were also treated for the effects of tear gas inhalation at the village of al Nabi Saleh. Troops attacked the unarmed protesters before even leaving the village. Later soldiers stormed the village and fired tear gas into residents’ homes causing damage.

Meanwhile Israeli troops attacked the villagers of at al Ma’ssara and their supporters at village entrance then forced them back using rifle buts and batons to bush people back, no injuries were reported.

The West Bank and Gaza Report

This week, the Israeli army conducted at least 70 military invasions into Palestinian communities in the West Bank and Gaza Strip. During these attacks Israeli troops kidnapped at least 24 Palestinians, including 6 children.

This week Israeli invasions to West Bank communities were focused in the districts of Hebron and Bethlehem, southern west Bank, as well as Nablus and Jenin in the north.

On Monday several Palestinians have been injured after Israeli soldiers invaded various neighborhoods Jenin, in the northern part of the occupied West Bank, and clashed with local youths.

Moreover Israeli soldiers fired dozens of tear gas canisters at a group of students and other civilians in east Jerusalem on Tuesday protesting an Israeli demolition order issued by the army on Monday.

The protest was not organized in advance, but broke out spontaneously in the Abu Dis neighborhood of East Jerusalem when Israeli Civil Administration officers, accompanied by armed Israeli troops, entered the neighborhood to issue a demolition order.

Israeli troops attacked on Wednesday midday a solidarity protest with Palestinian political detainees organized outside the Ofer military detention center near the central West Bank city of Ramallah. Israeli soldiers fired tear gas, rubber-coated steel bullets and sounds bombs at the unarmed protesters. Many were treated for the effects of tear gas inhalation.

On Thursday the Palestinian Prisoners Society (PPS) reported that Palestinian political detainee held by the Israeli army Abdullah Barghouthi, was moved on Thursday from the Ramla prison clinic to the Al-Affoula Israeli hospital, due to a sharp deteriorating in his health condition.

Al Barghouthi, who is the leader of the Al-Qassam Brigades the armed wing of Hamas, is holding hunger strike in solidarity with Jordanian detainees in Israeli prisons; he is serving 37 life terms, and started his hunger strike 35 days ago. Moreover Palestinian female detainees, held by Israel, started an open-ended hunger strike demanding the Israeli Prison Authority to provide the needed medical treatment to detainee Heba Abu Rezeq.

Abu Rezeq was kidnapped three months ago, and is being held in solitary confinement. She is facing several psychological problems, and needs urgent therapy, yet, the prison administration is threatening to move her to a different facility, and to completely isolate her.

In the Gaza Strip this week, one man was injured on Sunday when Israeli troops stationed at the borders between northern Gaza and Israeli opened fire at a group of workers and bird hunters.

24 ministers were sworn in on Thursday with the presence of President Mahmoud Abbas. The number includes some new posts such as deputy-president for economic affairs and Secretary General of Presidency affairs.

Rami Alhamdallah, a 55-year-old academic Palestinian from the West Bank, will lead the new cabinet and has a number of responsibilities such as making sure the Palestinian Authority will have less financial problems and working on reconciliation between Fatah and Hamas , the largest political parties in Palestine.

On the eve of his new cabinet instalment, President Abbas maintained that the Hamas party has yet failed to produce any kind of flexibility towards reconciliation. Abbas believes that ballots are the best approach to reconciliation.

Meanwhile, the Hamas-led government in Gaza had earlier hoped that the Alhamdallah will succeed in bringing about a pending reconciliation. Hamas had always accused former PA’s prime minister of hindering a reconciliation deal.

Eriqat believes that Hamas in Gaza has maintained some interests being in power over there and that’s why the Islamist party gives priority to those interests, including economic ones.

Regarding stalled peace talks between Israel and Palestinians, Eriqat believed that unless Israel reconsiders it’s settlement policies in the occupied Palestinian territories, negotiations could not be resumed.

He also maintained that a two-state solution is losing momentum in the shadow of Israel’s policies, saying that US’s Secretary of State, John Kerry, has been recently making relentless efforts for bringing the parties back to the negotiations table.

And that’s all for today from This Week in Palestine this was the Weekly report for June 1st to the 7th 2013 from the Occupied Palestinian Territories. For more news and updates please keep visiting our website at www.imemc.org. Today’s report has been brought to you by Husam Qassis and me, George Rishmawi