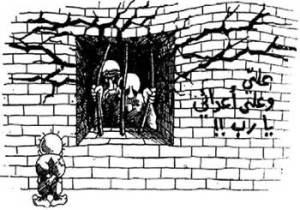 1600 Palestinian political prisoners, held by Israel, declared they will be starting an open-ended hunger strike on April 17th in protest to their illegal detention, and demanding basic rights.

HAVANA TIMES, April 14 — Welcome to this Week in Palestine, a service of the International Middle East Media Center, www.imemc.org, for April 7th to the 13th 2012

The Palestinian Authority announced that it is going through a hard financial crisis, and Palestinian political detainees continue on their hunger strike. These stories and more, coming up, stay tuned.

Let’s begin our weekly report with the nonviolent activities in the West Bank. This week the protests were in solidarity with Palestinian political detainees on hunger strike protesting ill-treatment by their Israeli captives. IMEMC’s George Rishmawi with the details:

One child was injured many others were treated for the effects of tear gas inhalation at the village of Nabi Saleh, in central west Bank. Villagers of al Nabi Saleh along with international and Israeli supporters tried to march toward local farmers land taken by Israel to build a settlement on. Soldiers stopped them at the village entrance and forced them back using tear gas and rubber-coated steel bullets.

Troops then invaded the village and fired tear gas into residents’ homes, one gas bomb hit Bilal al Tamimi, 16, in his head while he was at his home. Soldiers also detained the ambulance car that took al Tamimi before it was allowed to leave the village to get to the nearby hospital in Ramallah.

Meanwhile, two were slightly injured and many others were treated for the effects of tear gas inhalation at the nearby villages of Bil’in and Nil’in.

In Nil’in villagers along with international and Israeli supporters managed to reach the gate of the wall separating local farmers from their lands before soldiers fired tear gas at them. In Bil’in troops fired tear gas and rubber-coated steel bullets at the villagers and their supporters before reaching the wall. two locals were moved to hospital after being hit with rubber-coated steel bullets.

In southern West bank, also on Friday, the villagers of Al Ma’ssara and residents of Beit Jala town near Bethlehem marched against the wall. Soldiers used tear gas in al Ma’ssara village; many were treated for the effects of tear gas inhalation.

Beit Jala residents marched on Good Friday to their land that Israel has taken over to build the wall. The protest was lead by local priests and ended after a short mass near the confiscated lands.

This week the Palestinian Authority announced that it is going through a hard financial crisis, while the Palestinian-Israeli peace process is still stalled. IMEMC’s Rami Al Meghari has more:

US Secretary of State, Hillary Clinton says that her administration decided to support the Palestinian Authority with more than 140 million dollars, as the PA is going through a financial crisis.

Also , the EU has pledged backing up the PA’s budget for March, amidst the PA’s inability to pay fund salaries of it’s payroll. Meanwhile, the Quartet committee for Middle Peace, comprising of the US, UN, EU and Russia, called this week on both the PA and Israel to resume peace talks, stalled since late 2008.

The PA said this week that is going to head again for the United Nations to push up for it’s last year’s demand that the UN recognizes Palestine as a member state within the 1967 borders including the Gaza Strip, West Bank and East Jerusalem.

Israel will unlikely comply with the demands, some sources within the Israeli cabinet indicated.

At the internal level, implementation of a recent conciliation deal between Hamas and Fatah party of Palestinian president Mahmoud Abbas seems far from reaching. However, sources within both parties have reiterated their willing to start implementing the Qatar-mediated agreement.

The Palestinian elections committee in Ramallah called on Hamas authorities in Gaza this week to allow preparations for presidential and legislative elections but Hamas declined, saying no elections before implementation of the unity deal sees the light.

While Palestinian prisoners in Israeli jails continued their hunger strike, the Israeli military conducted 52 incursions into Palestinian communities in the West Bank, during which they abducted 32 Palestinians, including 6 children.

This is the second Welcome to Palestine campaign to be organized by over 25 Palestinian organizations in the West Bank. In July 2011 around 650 people signed up and purchased tickets to come to Palestine, however, over 350 of them had their reservations revoked one day before the travel date based on instructions from the Israeli ministry of Interior sent to the airline companies.

Last year Over 120 passengers were denied entry at Ben Gurion airport as they declared their intentions to visit Palestine. This year visitors are expected to arrive on Sunday April 15.

In other news eleven Palestinian political prisoners continued their hunger strike this week, Palestinian human rights groups reported. According to the report two of them Thaer Halahla and Bilal Thiyab have entered their 45th day of hunger strike, on Friday. The political detainees are protesting at the Israeli policy of administrative detention and ill-treatment inside detention centers. The Israeli government uses administrative detention to hold Palestinians for an unspecified time without any charges.

Last month prisoner Hana Ash-shalabi ended her hunger strike after a deal was reached to deport her to Gaza for three years before she can return to her home in northern West Bank. Immediately after being kidnapped by the Israeli army in the West Bank, Ash-Shalabi, 30 years old conducted a 43-day hunger-strike demanding an end to her illegal detention.

In the Gaza Strip this week two Palestinian resistance fighters were wounded on Saturday by an Israeli air strike in the southern Gaza Strip town of Rafah. On Sunday another Palestinian civilian was wounded by Israeli forces while he was collecting junk in the east of Gaza City. Also this week, Israeli gunboats opened fire at Palestinian fishing boats in the northern Gaza Strip three times.

For more updates; please visit www.imemc.org. Thank you for joining us from occupied Bethlehem, This report has been brought to you by Husam Qassis and me Ghassan Bannoura.