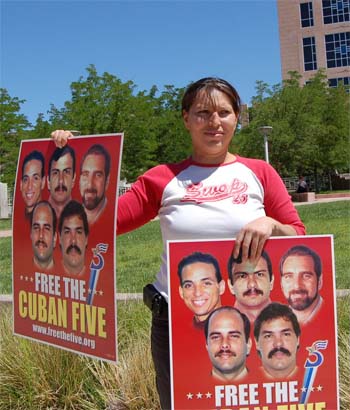 HAVANA TIMES, Nov 23 — The Canadian Union of Postal Workers adopted a resolution at their national convention to support the cause of the Cuban Five, call for an end to the US embargo on Cuba and its travel ban on the island.

The union represents 56,000 postal workers across Canada. The convention took place on October 27.

The following is the full text of the union’s resolution regarding Cuba.

Cuban 5, the U.S. Embargo and the Travel Ban

WHEREAS Ramon Labanino, Rene Gonzalez, Fernando Gonzalez, Antonio Guerrero and Geraldo Hernandez, known as ‘Cuban Five’, were arrested in Miami, Florida in September 1997 and charged with 26 counts of violating federal laws of the US, 24 of those charges were technical and minor offences, none of the charges reflected violence against the US, use of weapons, property damage, nor threatened or killed any person or transferred US government documents or classified material, they are serving four lifetime sentences and 77 years in US prisons collectively;

WHEREAS the Cuban Five had a mission to infiltrate the activities of terrorist and criminal groups operating in Miami and report planned threats against the Cuban people and government of Cuba, more than 3000 Cuban citizens have lost their lives due to this terrorism over decades including the explosion of a bomb in midair killing 73 passengers of Cubana Airlines on October 6, 1976 which Orlando Bosch and Luis Posedo Carriles of Miami have been suspects;

WHEREAS on May 27, 2005 the UN working group on Arbitrary Detentions found the detention of the Cuban Five to be in ‘contravention of article 14 of the ‘International Covenant on Civil and Political Rights’, and requested that the US government adopt necessary steps to remedy the situation in conformity with the covenant;

WHEREAS Amnesty International has condemned the inhumane treatment of the Cuban Five by the US refusal and or severe limitation of visas for family visitation since 1998, particularly visas for Adriano Perez and Olga Salanueva;

WHEREAS President Barack Obama has stated that the objective of the US government is to normalize relations with Cuba;

THEREFORE BE IT RESOLVED that CUPW and its members demand that the US government free the Cuban Five political prisoners held in US prisons.

BE IT FURTHER RESOLVED that as long as these men remain in prisons, the US government allow the right of regular visits, including the immediate granting of humanitarian visas to Adriana Perez and Olga Salanueva to visit Gerardo Hernandez and Rene Gonzalez respectively;

“BE IT FINALLY RESOLVED that the US government immediately allow all US citizens unrestricted travel to Cuba.”