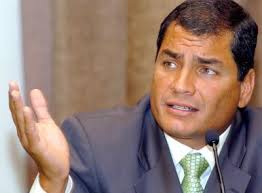 HAVANA TIMES — The possibility of decriminalizing abortion in Ecuador, an issue under discussion today in the National Assembly, could result in the resignation of President Rafael Correa.

The president questioned the attitude of his ruling party representatives that have adopted positions favorable to the non-punishment of abortion.

Correa said he does not approve of such a reform and that “if you follow this betrayal and disloyalty, and tomorrow we see something very unfortunate happening in the coalition (Alianza País), I will submit my resignation.”

In an interview with Channel Oromar of the coastal province of Manabi, Correa expressed his discontent with the approach of his alliances’ deputies and said: “The disloyalty and betrayal of supposed friends has cost me much more than the successes of the enemy.”.

The president stated that the Ecuadorian Constitution proclaims its defense of life from the moment of conception and that the National Development Plan “for which the Ecuadorian people voted” does not include the decriminalization of abortion.

He therefore reiterated that if the “very disloyal” lawmakers legalize abortion, “I will immediately present my resignation. To defend life I’m willing to give this [the presidency] up and history will know how to judge me.”

The Ecuadorian legislature began the final debate Wednesday on a new Integral Penal Code, which modernizes the conception and penalties for offenses. It incorporates the accumulation of convictions and includes offenses such as feminicide, among other topics.

In the discussion on punishable abortion, which ends today, governing alliance lawmakers supported the possibility of decriminalizing abortion when the life of a pregnant woman is in danger.

The Assembly is in permanent session for the purpose of approving the new Criminal Code, likely to conclude on Sunday.