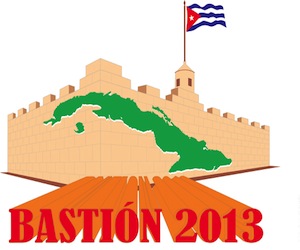 HAVANA TIMES — Cuba kicked off a large military exercise on Tuesday known as “Bastion 2013,” a nationwide deployment in preparation for any foreign invasion.  Originally called for 2012 it was suspended after the country was hit by Hurricane “Sandy” in October of last year.

President/General Raul Castro officially the launched maneuvers, covering the whole island and to be held through Friday, reported dpa news.

“Over the next four days we will carry out strategic exercise Bastion 2013,” said the 82-year-old president in a speech broadcast on state television.

The exercises held since the 80s, were due to take place last year, but were postponed due to the ravages of hurricane “Sandy” in the east of the island. Eleven people were killed in the provinces of Santiago and Guantanamo after the hurricane, which damaged or destroyed more than 226,000 homes.

The maneuvers of “Bastion” include a massive military deployment that includes the population. Former President Fidel Castro defined the strategy as “a war of all the people”, designed especially for a possible confrontation with the United States.

Havana and Washington have a hostile relationship since the triumph of the 1959 revolution. The escalation reached a peak with the failed Bay of Pigs invasion in 1961, in which Cuban exiles attempted to overthrow Fidel Castro with US support.

“Bastion” was held for the first time in 1980 after the arrival to the presidency of Ronald Reagan, who supported a tough policy against the Castro regime .