“Yo También Exijo” (I also make my demands) 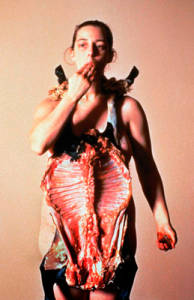 Bruguera, born in Havana in 1968, is a performance and installation artist. One novel past performance involved her covering herself in raw meat.

In 2009, she staged an open microphone event in Havana during the annual International Book Fair that angered Cuban officials. Speakers at that event included blogger Yoani Sanchez.

Editors Note: As of Monday, Bruguera has not been issued a permit to hold the performance and cultural authorities have discouraged her saying it could have negative repercussions for Cuba and her personally.

Below is Bruguera’s letter explaining what she hopes accomplish on Tuesday December 30th:

Following the news of December 17th that stirred our Nation, I sent a letter to the Cuban newspaper, Granma (which, of course, was not published). After its publication by other press media, a group of Cuban citizens with no party affiliation reacted to a phrase in this letter that calls all Cubans to gather next December 30th at La Plaza to speak out at an open microphone.

They have created the platform #YoTambienExijo (http://www.facebook.com/YoTambienExijo) to which they have invited me, and so far, it has added more 1000 persons with the common purpose of making real what was kind of a metaphor in my letter or maybe an unconscious desire that slipped out of my mind due to that day’s commotion.

The idea is to get together at La Plaza on December the 30th at 15:00 in order to speak and discuss peacefully about what concerns us in these days, to be there and let others know of what we think and our reasons for it, in an atmosphere of tolerance and respect.

Let there be diversity of opinions and topics so we can discuss and talk among us all. We do not have any kind of agenda nor follow any particular ideology; we just want people to come, those that have not found a space to share their doubts or experiences, and those that felt they were not represented by the alternative spaces already open.

Let’s all come: housewives, self-employed persons, movie makers, mechanics, taxi drivers, managers, sex workers, students, marginalized persons, teachers, retired persons, farmers, blue collar workers, in fact all; let’s get together and think about what is the concept of nation that we want to build and put into practice. We are not going to celebrate the potential ending of the embargo; we want to celebrate the birth of our rights. On that day we are not going to claim our rights, instead we are going to exercise our rights.

It would be great to interact with you on that day at La Plaza, as a direct referent to a work I did at the 2009 Bienal de la Habana, where I set a microphone that was used by those who stood for the Revolution, those who criticized it, those who couldn’t understand our reality, those who were afraid, and those who tried to vocalize their right to express their ideas.

It would be an honor to have you there. See you on December 30th at La Plaza. A different Plaza, our Plaza.