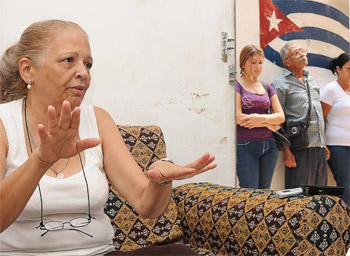 HAVANA TIMES — A dozen of Cuban political dissidents, headed by the economist Marta Beatriz Roque, declared themselves on a hunger strike starting today.

They are demanding the Cuban government respect national laws regarding the treatment of members of the political opposition.

Roque explained that they are demanding the release of a political prisoner in Villa Clara Province whose sentence was completed yesterday, the restitution of the belongings of a family from the eastern city of Palm Soriano, and an investigation into a fire at the home of a couple of political opposition figures in Havana.

Among the strikers are seven former political prisoners and five opponents who are on probation.

The most dangerous situation is that of Marta Beatriz’s, since she suffers from diabetes and could go into a crisis within only 48 hours after initiating the strike.

Nonetheless, the 63 year-old opposition leader requested that she be given neither medical care nor intravenous feeding. She assured that the strike would continue until the “ultimate consequences” and that the participants are willing to die if the government doesn’t respond to their demands.

Marta Beatriz Roque was a professor at the University of Havana and has been an activist among the ranks of the opposition since 1989, having been in the leadership of several groups. For those activities she was convicted and imprisoned on two occasions for a total of five years. Presently she is free under a court order granted to her for health reasons.