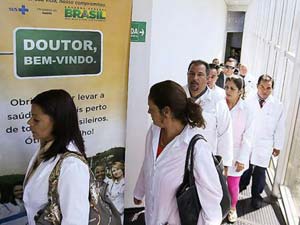 HAVANA TIMES — Ninety-five percent of the people served by the program “More Doctors” in Brazil said they were satisfied with it, according to a poll released Thursday by the government of the South American nation. The program is mainly staffed by Cuban physicians.

This public health program hired 14,462 doctors, of which 11,456 are Cuban, to serve 50 million people in remote regions or isolated peripheral areas of large cities, and districts in 34 indigenous municipalities.

According to the survey, which included 4,000 people, 86% felt that the quality of medical care is “much improved” since the arrival of new physicians.

The presence of foreign doctors, mainly the Cubans, initially generated controversy and has become the subject of electoral debate in that country.