A growing number of people in Cuba are making and giving out face masks to their neighbors and members of vulnerable groups, but the materials necessary to sustain this initiative are running out.

HAVANA TIMES – Given the emergence and spread of the novel coronavirus throughout the American continent and Caribbean, as well as the increasing reports of positive cases in Cuba, the Cuban population demand at least one face mask per person.

The oversaturation of news on social networks, fake news and statistics from other countries affected by the pandemic have given rise to fear and concern in parts of the Caribbean island, and many people are engaging in following the recommended protocols set out by both national and international health organizations.

Everybody wants a facemask, but mere good intentions won’t suffice to making this happen. Community projects, people and friends are inviting you to donate a piece of cloth that can be used to make and distribute more of these pieces. 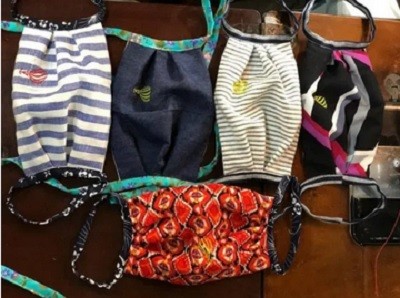 When and how to use a cloth facemask

The World Health Organization recommend the use of facemasks only for sick people with symptoms of Covid-19 and anybody looking after them.

Cuban state media suggest using cloth facemasks always under the following observations: change every two or three hours, wash with detergent or soap, rinse with plenty of water, dry in the sun and iron at high temperature.

If at the initial stage of Covid-19 in Cuba there were only a small number of women producing and providing masks, today the number of people involved in this work has grown, and they ask for help in sourcing the necessary raw materials such as fabrics, threads and elastics.

It is no longer just neighbours or families making these ‘cloth barriers’ that, if used properly, can protect against the virus in some situations. Some NGOs and companies usually operating in the world of fashion are now getting involved.

The Cuban fashion brand ‘Dador’, based out of Old Havana, recently became involved in the joint production of masks and received a remittance from abroad to buy fabrics. Yordy Morejon and Deisy María Rivero, asked for collaboration on social networks and have received sheets of cloth, pieces of elastic and even new sets of hand to help with the cutting, measuring and sewing.

In the Playa area of Havana, the community project ‘Petals of life’ have 14 women and 3 men engaged in making cloth facemasks, according to seamstress Evangelina Pose, a seamstress. They have already given them out to over 300 elderly people, sick people, the ’28 de Enero’ clinic and community workplaces.

According to a post on its official profile, a cooperative called Atres in the western province of Matanzas donated facemasks to workers at a bank, the paediatric hospital and a nursing home in the province. They announced that they will continue helping in this regard.

Meanwhile, in the Matanzas municipality of Cárdenas, several women related to the non-governmental Christian Center for Reflection and Dialogue Cuba are making masks and aspire to add more people to the group of seamstresses.

Although the Cuban government have tried to guarantee as many masks as possible, the current production does not correspond to the demand of a country with 11.2 million inhabitants.

According to data offered by the state newspaper ‘Juventud Rebelde’, light industry business groups accumulate nearly 200,000 masks in 64 workshops across 10 provinces of the country.

For their part, workshops such as Donaire, in the Cuban capital, develop facemasks to deliver to tourist chains and related institutions such as the Jose Martí International Airport.

According to a report by Radio Reloj, this unit, belonging to the Servisa company, stopped its usual manufacture of table linens, linings, bedspreads and other decorative objects, and its seven seamstresses have been delivering over 500 masks daily for over a week.

Despite this, however, continuous social media publications are showing us that this is not enough.

Some offer the product for prices between US $0.50 and up to the equivalent of five dollars. Others urgently request contacts to buy this garment and the number of people who, free of charge, make and donate facemasks is growing.