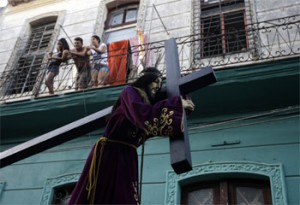 HAVANA TIMES, March 31 — Fresh from a three-day work holiday for Pope Benedict XVI’s March 26-28 visit to Cuba, the government has announced a new holiday, Good Friday, based on a request from the Pontiff to President Raul Castro.

With Easter week previously not observed by the Cuban State, next week, Friday April 6, will be the first adherence of the new holiday, noted the official Cuban press on Saturday.

Christmas Day was also reinstated as a national holiday by then President Fidel Castro when Pope John Paul II visited Cuba in 1998.

No mention was made if leaders of other widely practiced religions, such as the Afro-Cuban Santería, will also be able to propose important dates on their calendar to be observed as national holidays.

2 thoughts on “Cubans Get New Holiday Thanks to Pope”